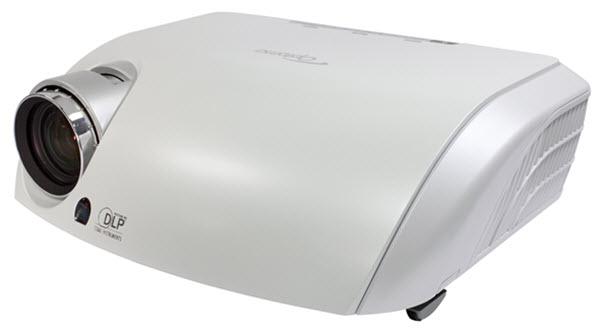 The Optoma HD806 is the newest of Optoma's family of DLP 1080p projectors. From the outside, the HD806 looks identical to the HD80, released in July of 2007. We reviewed it at that time (see review) and we were extremely enthused with it, eventually giving it an Editor's Choice Award. The HD80 was quickly followed by the HD8000, which is basically the same projector with some additional calibration features, and it is sold through the CEDIA channel rather than via internet resellers.

High Lumen Output. Our HD806 test sample measured a very high 1,036 ANSI lumens in its brightest cinema mode. This is a significant jump in brightness as compared to the HD80 which produced 687 lumens in the same mode. 687 lumens is plenty of light for dark room viewing, but the additional lumen power of the HD806 opens up more opportunities to use it in higher ambient light environments. Good ANSI contrast. The HD806 measured 448:1 in our ANSI contrast test lab. This is solid performance. It is competitive with the new high contrast LCD projectors that have just come to market, and falls just a bit short of the latest model DLP projectors that are designed for dark room viewing. The HD80 measured 515:1 due to its deeper black level, which is one of the features that makes it preferable for dedicating theater use. Keep in mind that the contrast which is visible to you on the screen takes a huge hit as soon as ambient light enters the viewing environment, so contrast measurements and specs mean a lot less on a projector meant for ambient light use.

Color. The HD806 uses a 2x speed six-segment color wheel, comprised of red, green, blue, cyan, magenta, and yellow segments. The HD80 uses a 6x speed seven-segment wheel, with segments of red, green, blue, red, green, blue, and dark green. When the two projectors are placed side by side, several things are immediately clear. The HD80 has better saturation, so its picture appears to be richer and more engaging when viewed in the dark. However, once you turn a light on, the truth changes--the HD806 suddenly looks more vibrant and alive due to its inherent advantage in brightness.

Good connectivity. Like the HD80, the HD806 has two HDMI 1.3 ports as well as a DVI port. The DVI connection will take both analog and digital signals, meaning you can connect your computer's DVI or VGA outputs to the HD806. Component video is present as well, which helps if you have game consoles that lack HDMI, like an early model of the Xbox 360 or a Nintendo Wii.

Limited placement flexibility. The HD806 has a 1.2:1 manual zoom lens and no lens shift; instead, it has a fixed throw angle. As a result, it must be mounted on a coffee table or in a ceiling mount, as it is very difficult to mount on a rear shelf. The bottom edge of the image will appear 39% of the image's height above the centerline of the lens. For example, a 100" diagonal screen is 49" tall, so the bottom edge of the screen will be 19" above the projector's lens centerline.

Very slow auto iris. The HD806 has an auto iris, like many popular home theater projectors. However, most auto irises adjust many times per second, or even on a per-frame basis. On our test unit, the auto iris adjusted roughly once every thirty seconds. Because it is so slow, it does not have the same contrast-boosting effect as other, faster irises. It can still be used as a manual iris if you feel that the HD806 is too bright.

The traditional color wheel in most DLP business projectors has a four segment wheel, which is red, green, blue, and clear, or white. This type of wheel at 2x rotation speeds generates the highest incidence of rainbows. Since the wheel in the HD806 has three primary and three complementary colors, we would expect rainbow activity to be reduced. However, in practice we saw enough rainbow activity on the HD806 to cause us to suppose it had a 2x speed wheel. By comparison, the HD80 next to it in side by side viewing showed no rainbows at all.

Fan noise/room heat. The HD806 has higher fan noise than the average home theater projector on the market today. The projector has a 300-watt lamp. That's hotter than most competing units, which tend to have lamps in the 160-watt to 200-watt range. The practical consequence of this is that the projector needs to move more air to maintain a stable operating temperature. So it produces somewhat more fan noise. If you have the HD806 installed in a small room, the heat from the projector can warm up the room. So adequate room ventilation is a must.

The Optoma HD806 is an attractive solution for projection in ambient light. We could see it working extremely well in a sports bar environment. In that setting, you want the HD806's bright, vibrant, high definition 1080p picture, and its shortcomings are irrelevant. People are not sitting so close to the screen that rainbow artifacts would be an issue. Fan noise and heat output are irrelevant. And the vast majority of sports bars will ceiling mount, so the lens limitations are of little concern. It is really an ideal projector for that type of use.

As far as home theater is concerned, when compared to projectors like the HD80 and HD8000, the HD806 falls a bit short in contrast, color saturation, and color wheel speed. However, if you are looking for a bright DLP 1080p projector for casual home video entertainment with a light or two on, and you are among those that aren't sensitive to rainbow artifacts, the HD806 may be just the right choice. But if you can darken your viewing room such that you don't need the HD806's light output, then the HD80 and HD8000 will be the better options for the highest quality home theater picture.

For more detailed specifications and connections, check out our Optoma HD806 projector page.

Question on the reference to a 2X color wheel. I haven't seen any details about this specific model other than this review, but in the past a projector with a 6 segment CW rotating at 120 Hz (2X the base 60HZ), would be called a 4X CW due to the RGB segments being doubled. 6 segments at 150 Hz would be 5x, etc. So with this projector having a new CW with 6 segments with different colors, the individual segments are still smaller which would make me think this is more akin to a 4X than a 2X CW.
Ernie Posted May 28, 2010 6:52 AM PST
Hi, guys, Based on this review, I bought the projector. Although it seems good, Im having a problem. My walls are white and maybe because of that, I'm not having great whites... Do you guys think I can compensate that with mnul Iris control as stated above? Thank you!
Craig Posted Aug 3, 2010 8:42 AM PST
My bulb only lasted 1521 hours! I thought it was rated for 4000 hours.
CESAR XOTLANIHUA Posted Dec 18, 2010 5:54 PM PST
Tranlated - COMPRÃ EL OPTOMA HD 806, Y LA LAMPARA SOLO TUVO UNA VIDA DE 300 HORAS. COMPRÃ UN REEMPLAZO(LAMP) Y SOLO DURÃ 6(SEIS) HORAS. EL PROYECTOR NO INDICA NADA ANORMAL. SE DESCOMPUSO OTRA VEZ.ALGUIEN ME PUEDE APOYAR?

I BOUGHT THE OPTOMA HD 806, AND THE LAMP ONLY HAD A LIFE OF 300 HOURS. I BOUGHT A REPLACEMENT (LAMP) and lasted only 6 (SIX) HOURS. THE PROJECTOR DOES {indicate anything} ABNORMAL. Can you help me?