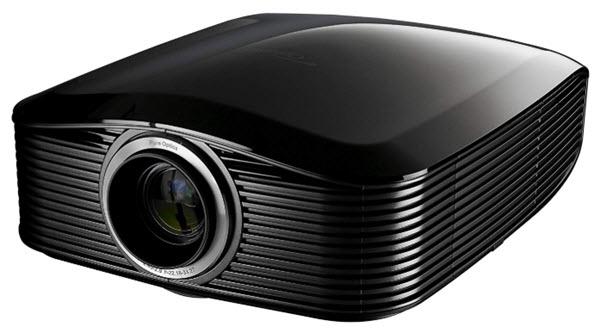 The Optoma HD8200 follows in the footsteps of the venerable HD80, which was one of the finest 1080p DLP projectors under $10,000 during its time, and won our Editor's Choice Award. It had great ANSI contrast at 515:1 and superb color performance. Now, the HD8200 takes the HD80's impressive legacy and surpasses it, reaching an impressive 582:1 ANSI contrast. The HD8200 also has some unusual and welcome features for a DLP projector - namely a 1.5:1 zoom lens, as well as vertical and horizontal lens shift. Reasonably quiet operation and frame interpolation round out the package, making the HD8200 an attractive value at $5000.

Contrast. The HD8200 has the highest ANSI contrast we have yet measured on any projector. It produced 582:1 ANSI contrast using the projector's Cinema mode, making no adjustments -- this is an "out of the box" measurement. This beats out the previous record holder, the BenQ W20000, which measured 560:1 ANSI contrast.

Of course, ANSI contrast is not the only factor that contributes to the perception of contrast on the screen. Native on/off contrast, and when applicable, the action of a dynamic iris, also influence the perception of dynamic range on the screen. Though ANSI contrast on the HD8200 is the highest we've seen, native contrast measured 8,700:1. This is average native contrast, and not exceptional by competitive standards. The Epson 6500 clocked in at 18,000:1, and the JVC RS10 was 23,300:1.

Lumen output. The HD8200 is designed for light-controlled home theater use. There are no Dynamic or Living Room modes similar to those on some competing models which boost brightness in order to compensate for ambient light conditions. In its brightest mode, the HD8200 measured 681 lumens; this was "Bright" or "Photo" mode (they measured identically) in high lamp with the zoom lens at its maximum wide angle. In Cinema mode, the HD8200 technically measured nearly 600 ANSI lumens on a white 100 IRE screen, again with lamp on high and zoom set to wide angle. However, due to the action of an auto-iris, this is not indicative of actual average picture luminance. Once you get anything other than white on the screen, the iris begins to close down. On a 50 IRE screen, the iris reduces lumen output by 1/3 from what it would be with the iris off. Thus, if the average picture luminance is equal to 50 IRE, the real maximum lumen output on screen is closer to 400 lumens.

Connectivity. Connectivity on the HD8200 is among the best in its class. The projector has two HDMI 1.3b ports, one DVI-D port, one VGA/Scart input, one 3RCA component, s-video, composite, RS-232c, and two 12-volt triggers. Three digital inputs makes it easy to connect all of your high definition sources simultaneously, and the two 12V triggers can accommodate an anamorphic lens and motorized screen.

Audible noise and heat. Fan noise in normal mode is somewhat higher than average for 1080p home theater projectors as a class, but not objectionably loud. The unit has a 220W lamp, which is about as low as you can find on a DLP home theater projector. Some DLP models use 300-watt lamps which throw off quite a bit of heat in the room. The 220W lamp is a welcome improvement.

Anamorphic options. The HD8200 has an anamorphic vertical stretch mode on board, so it is ready to accommodate an external anamorphic lens. The 1.5x zoom lens has enough range to move back and forth from 2.35 to 16:9 if the user wishes to set up a 2.35 CIH system with zoom changes rather than the anamorphic lens. However, for the large majority of users who are expected to ceiling mount this projector, that option is impractical since the zoom lens adjustments are manual. For the price, we would like to have seen powered zoom/focus.

Warranty. The HD8200's warranty lasts for three years, which is as good as it gets in the projector business these days. This means you can rest easy, knowing your considerable investment is protected should anything go wrong.

Good placement flexibility. The HD8200 has a 1.5:1 manual zoom, allowing it to throw a 100" diagonal 16:9 image from 10' 10" to 16' 7". It also has some modest lens shift capability, which is somewhat of a rarity on DLP projectors. Lens shift allows you to move the image up to 1/3 of the image's height or width, or about 17% in any one direction from center. This is especially handy if you're planning to ceiling mount, which the HD8200 is ideally suited for. If you get the projector settled into a ceiling mount only to find that it's not hitting the screen quite right, you can fix it without relocating the mount itself.

Color wheel configuration. The HD8200 has a six-segment (RGBRGB) color wheel with a 6x rotation speed, which is excellent for home theater. A 6x-speed wheel virtually eliminates any concern about color separation artifacts.

Frame interpolation. The HD8200 has a frame interpolation system, which Optoma calls PureMotion. It is hard to find at first, as it is buried in Image > Advanced > PureEngine, along with the settings for the auto iris and some detail and color enhancements. When using 24p content, the HD8200 creates one interim frame for every real frame, displaying them at 48 Hz. This greatly reduces judder.

Our impression of FI on this unit is mixed. There are three settings, Low, Medium, and High. In the Medium and High settings, we found too many distracting artifacts. But when the system is set to Low, the results were quite satisfying. Motion judder was significantly reduced, while just a minimal level of undesirable artifacting was introduced. We found this to be the smoothest and most attractive option for a number of films being viewed in 24p transmission.

Rear shelf mounting is difficult. The HD8200 has a built-in offset throw angle that makes it good for ceiling mounting, and good for placement on or under a coffee table, or a table between the seats. When ceiling mounted (or table mounted), the lens shift can place the top (bottom) of the projected image at the same height as the lens centerline, or drop (raise) it up to 33% of the image height. However, if you wanted to install the HD8200 on a rear shelf above and behind the seats, you're out of luck. When turned upright, the bottom edge of the projected image cannot be dropped below the centerline of the lens, which means you'd need to tilt the projector and compensate with a lot of keystone correction. Not recommended.

Strange auto iris behavior. There seemed to be some peculiar behavior in the auto iris, in that when turned off, it would default to a position that was not wide open. This substantially reduced lumen output from what the projector would otherwise be capable of. Having manual control of the iris position would be a desirable feature on this model.

The most obvious direct competition for the HD8200 is the JVC RS10. They are both 1080p models priced at $4,995, and both are being sold through CEDIA dealers and specialty retailers.

The big issue that most readers will wonder about is contrast. The HD8200 has just about double the ANSI contrast as the RS10 (582:1 vs. 299:1). Meanwhile, the RS10 has almost triple the native contrast (23,300:1 vs. 8,700:1). How do these numbers translate to actual perceived contrast on screen? Basically, if you forget about the contrast data and set them up side by side such that they are outputting similar lumen level, the RS10 shows more dynamic range, which means that the RS10 will have a somewhat blacker black and brighter highlights in any given scene. Overall, the JVC looks to be the higher contrast of the two pictures.

Due in part to the lumen-curtailing action of the iris on the HD8200, the RS10 is also capable of producing a brighter video image. This is not the conclusion you'd come to if you relied upon the specs, as the HD8200 is rated at 1300 ANSI lumens, to the RS10's 1000. Here's one more example of why it is not smart to shop by comparing specs.

However, the HD8200 has one key advantage over the RS10, which is frame interpolation. It is interesting to watch these two units side by side with the HD8200's frame interpolation on Low. On many films, the HD8200's picture is smoother and more stable, whereas the inherent motion judder in 24p transmission is obvious on the RS10. Though the RS10 has better brightness and dynamic range, it is easy to imagine many users would opt for the HD8200 for its superior smoothness of motion.

The Optoma HD8200 is a solid and impressive performer. Users will love the picture it delivers. At a price of $4,999, it is not setting any new benchmark standards in price/performance, but it is the only DLP 1080p projector on the market today with frame interpolation on board. The inclusion of a 1.5:1 zoom lens and some lens shift capability are also stand-out features for a DLP projector in this price range. For those looking for this particular combination of features, the HD8200 is a great choice.

For more detailed specifications and connections, check out our Optoma HD8200 projector page.

Domonic thank you for your question. I would like to start by saying that Arcam Ltd and Optoma have reached an agreement in which we will release the new Optoma 8300 model in September 2009 which we have been working on together for over a year now. We will bring our extensive interpolation knowledge to the table to help Optoma with the 8300.

It will include a 100Hz and 120Hz mode amongst many other new features. All this and we intent to find new Korean manufaturers to reduce the rrp to beat our strong compition.

I hope this helps in some way

It is sold as HD-82(Asia model) in India . This is a very good Home theatre projector and value for money. Good luck to you.

I have not seen any response from Optoma even when this problem has been confirmed with several different euro-units and all the firmware versions. It's a shame that such a great projector has such a big problem. I just hope it will be sorted out with a firmwire update, until that happens I do not recommend HD82 if you plan to use it with a computer.
kevin Posted May 16, 2010 3:03 PM PST
Hey can anyone tell me what would be the ideal projector distance for HD 82. Home theatre room dimension is 20 X 18. L W
Rajesh Posted Jul 7, 2010 7:47 AM PST
Pls let me know the ceiling height . Since you have a 18 foot width , you can easily accomidate a 135" diagonal screen native 16:9

The projector distance would be 17 feet from the screen
Rajesh Posted Jul 7, 2010 8:18 AM PST
Pls let me know the ceiling height . Since you have a 18 foot width , you can easily accomidate a 135" diagonal screen native 16:9

The projector distance would be 17 feet from the screen
elspeth jill Posted Oct 3, 2010 1:08 AM PST
Hi. It seems that when I'm using the optoma HD82 on a dvd movie, it's quite clear, but when using the xbox360, it seems that the quality of the picture changes to a "low quality". what will i do? thanks!!!