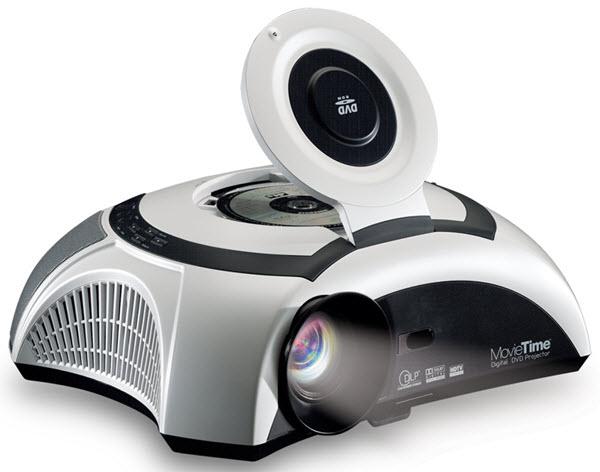 Optoma has released some impressive products this year, including the low-end H31 480p projector and the high-end DarkChip3 H79 720p projector. However, at CES in January, they announced their intention to bring something a little less conventional to market: a quality projector with a DVD player built-in. It's called the MovieTime DV10, and it eliminates the hassle of component set-up and cable runs, making the big-screen experience obtainable in minutes. The DV10 brings together a video source, a display device, and an audio system in one box.

Some people will understandably compare the DV10 to the Optoma H31, Optoma's popular 854x480 home theater projector. Image quality on these two units is nearly identical. However, the H31 is an excellent choice as a projector in a traditional multi-component home theater system, whereas the DV10 is intended to provide a complete home entertainment system in a stand-alone package.

The DV10 is somewhat brighter than the H31. While the H31 outputs between 300 and 350 ANSI lumens at levels optimized for video, the DV10 can pump out between 370 and 470 ANSI lumens when calibrated for video. For use with video games, the DV10 is capable of lumen levels in the neighborhood of 800 to 975 ANSI lumens without a significant loss in image quality. However, use of very high lumen levels during video use will decrease color saturation, so this high lumen mode is better suited to video games or data than video signals.

Optoma's new ImageAI(TM) technology analyzes the projected image to see if it is mostly dark or mostly light, and then adjusts lamp output to either reduce black level or boost lumen output, respectively. With this feature activated, Optoma claims an on/off contrast ratio of 4000:1. However, this feature would not affect ANSI contrast (the difference between black and white areas in the same image), as the whole image is raised or lowered in brightness simultaneously, just as it is with a dynamic iris. This means that you will never see both the DV10's brightest whites and deepest blacks in the same image. Nevertheless, the overall effect works quite well, as the DV10's high contrast image really pops on the screen.

Color accuracy is nearly spot-on right out of the box, just as it is with the H31. However, there are also color calibration adjustment controls that allow you to fine-tune the image according to your own preferences.

Onboard deinterlacing is very good; 480i material either from the integrated DVD player or external video sources is displayed with very few artifacts. Some very difficult scenes occasionally exhibited breakup, but these were few and far between. Scaling of HDTV signals is excellent, with 720p and 1080i sources downscaled cleanly. Like the H31, we were impressed by how good HD signals can look on a 480-line projector. Despite the lack of a DVI interface, the DV10 does an excellent job maintaining overall HDTV image integrity through the analog VGA port.

Of course, the most important feature of the DV10 is the way the system is constructed. DVD player, projector, and audio system are fully integrated, so there is no need for video cables or speaker wire. The integrated system means that a truly instant setup is possible--you plug it in and turn it on, and you are in business.

An additional benefit of the DV10's integrated DVD player is that it provides a direct interface between the DVD player and projector circuitry, eliminating the video cable. Cables can sometimes introduce noise, and signals tend to degrade over longer lengths of cable. With no connections to be made between the projector and the DVD player, this is one less thing to compromise image quality.

When Optoma's new ImageAI feature is enabled, light output from the lamp can change up to 20% depending on the scene. Lamp output is changed quickly enough that we never noticed the change occur, though the effects are clearly visible in that bright areas are boosted during bright scenes, while black levels get better during dark scenes. And while the fan changes speeds when the lamp is switched from standard to high brightness, the fan stays at a constant speed when ImageAI is enabled.

The DV10's 4x speed 7 segment color wheel is ideal for a projector built for first-time buyers who may not know if they are sensitive to rainbow effects or not. By including a fast wheel, Optoma has made sure that most users will never know what a color separation artifact looks like.

The DVD player's Setup menu has its own set of basic image adjustments (brightness, contrast, color, tint, sharpness) that are factory optimized for the projector, in addition to the adjustments in the projector menu. However, some users may have their own preference for DVD playback that differs from their preferences for other sources, so Optoma left the option open to adjust the DVD player's output settings as well.

The remote provides control of both projector and DVD player functions, and most of the remote's space is taken up by DVD player buttons. On the projector side, the remote contains menu controls, an aspect ratio button, and a source button Ã¯Â¿Â½ that's all. The DVD portion of the remote is covered in everything you've come to expect from a DVD player Ã¯Â¿Â½ menu controls, chapter skip and FF/RW buttons, a numerical keypad, subtitle and audio track buttons, and a volume control for the onboard speakers. For some reason, the keystone adjustment buttons are located in the DVD section of the remote, which we found confusing at first. The remote also lacks backlighting or glow in the dark buttons.

The menu systems are well-organized and laid out cleanly, and we had no trouble finding our way around them. Options include digital zoom, image shift controls for changing the vertical position of material wider than 16:9, gamma adjustment, white peaking adjustment, color temperature, overscan adjustment, and an option to reposition the menu.

The connection panel on the DV10 is somewhat sparse; included are USB, RS232, VGA-in, S-video, composite video, RCA audio-in, and two audio-out ports (one 1/8" analog for headphones, one TOSlink digital). There are no dedicated component inputs, but Optoma includes an adapter cable to connect 3-RCA component video to the VGA port. There is no DVI or HDMI input for an external digital video source. Of course, the DV10 is not designed to be a central display device for a multisource home theater system, it is meant to be a portable stand-alone system.

The built-in 5W stereo speakers did an outstanding job considering their size. Even at their highest volume levels they did not produce any internal vibration that caused the image to be unstable. Optoma also sells a subwoofer that is designed to complement the onboard speakers, however we were not able to obtain a sample at the time of this review.

The DV10 is extremely portable. When the projector is plugged in, the projector chooses the onboard DVD player as the source unless you have told it to do otherwise, and if there is a DVD in the drive it is played automatically. With only a power cable to plug in, this projector is perfect for bringing around to friends' houses or on vacation.

The DV10 has a short zoom range, with a ratio of 1.11:1. The Movietime DV10 was not built to be "installed" per se, but rather placed in the viewing environment whenever you wish to use it -- just set it on the coffee table, plug it in, and turn it on. The short zoom range limits the size of the projected image from any given distance. However, if you are working with a screen rather than a wall, the zoom lens will make it a bit easier to square up the image with the screen frame.

The aggressive image offset puts the bottom edge of the image 54% of the image height above the center of the lens, which is a good offset for a coffee table projector. If you have hardwood floors, or some other hard material, the projector could even be set on the floor - though this would not be advisable with carpet, as there are air intake vents on the bottom of the projector which could be blocked and cause cooling problems. While rear shelf mounting would be tricky with this offset, it would also eliminate the benefits of the internal speakers and could make access to the DVD player somewhat difficult, so it is not practical. Ceiling mounting would be problematic for the same reasons. In addition, you wouldn't want to climb a ladder to reach your DVD player, and the DVD player is not built to function in an inverted position anyway. The DV10 is designed primarily for coffee table use, and thus should be used in this manner.

Audible noise is not an issue with the DV10. With only 28dB of audible noise in high power mode and 27dB in low lamp mode, the DV10 is rarely loud enough to cause a distraction, even when sitting directly behind the projector. And since Optoma expects most users to sit directly behind the projector, heat exhaust is directed out and to the left of the unit (that is, if you're behind it; if you are looking at the projector from the front the heat is expelled to your right). There is also little to no light leakage from the MovieTime DV10.

Optoma has designed a projector that both the first-time buyer and the experienced projector user can enjoy. It is light, bright, portable, and produces a great image, comparable to Optoma's H31 or other high quality 480p projectors. With the integrated DVD player, wiring is kept to a minimum, and the projector can be packed away in its included carrying case when not in use. If you are interested in portable, part time home theater in a living room or family room, the MovieTime DV10 offers a complete package that eliminates the hassles of cable clutter and connections. Selling at street prices around $1500 at the time of this article, the MovieTime DV10 is definitely worth a look.