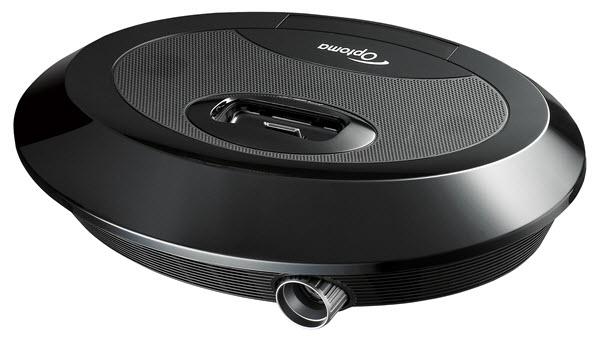 Thanks in no small part to the iPod, it's easy these days to carry around hours and hours worth of movies and music right in your pocket. The downside, of course, is that it's hard to watch a movie with someone else when the screen is only a few inches across. Enter the Optoma Neo-i DV-20A, a projector built to complement the iPod. Its 854x480 resolution is perfect for DVD-quality video, while its dual 8W stereo speakers provide serious sound power. An LED lamp keeps the projector maintenance-free. And with street prices under $450, the Neo-i is well within most budgets.

The Neo-i's claim to fame is its degree of iPod integration. Billed as an iPod dock with a pico projector inside, it blurs the already fuzzy line between projectors with special features and products that only happen to incorporate projectors. Outwardly, it looks like no projector you've ever seen. It looks a bit like a flying saucer.

The Neo-i has a fixed focal length lens, meaning there's no zoom. The ratio of distance to image width is 1.8:1, so for a 60" diagonal image (52" width) you'd need to place the projector about eight feet from the screen or wall. The Neo-i has an throw offset such that the bottom edge of the image will coincide with the centerline of the lens. It is designed to be placed on a coffee table, desk, or shelf and projected onto a nearby wall. The iPod's screen faces backwards when it is docked to the projector, allowing you to skip songs or videos from its interface. With the Neo-i's small size and light weight, you can place it just about anywhere.

In a dark room, a 60" diagonal image is possible, though at 50" the picture has a bit more pop and sparkle to it. Optoma claims that the Neo-i can project up to a 120" diagonal, and while this is true it is not recommended. The resulting image can be dim and lifeless, even in a dark room. If you happen to be using the Neo-i in a room with the lights on, try to keep screen size to 20" to 30" diagonal if possible. This will create a perfectly watchable image, though some shadow detail will be lost.

This is a perfect product for a dorm room, small bedroom, or kids' game room--anywhere a full-sized projector would be inappropriate but you want something more versatile than a television. And it truly is more versatile than a television, acting more as a combination stereo and video system. If you use your iPod or iPhone as an alarm clock, the onboard speakers can amplify that for you--something that will be very helpful to college students, who as a rule are not "morning people." Picture quality. The Neo-i isn't just a projector for the iPod; it is also the perfect resolution for the display of DVD video. At screen sizes up to about 50" diagonal, the Neo-i is bright and vibrant, with strong color saturation and sparkling highlights. Shadow detail is solid and black levels are good for this class of product (which is essentially a pico projector, remember). Overall contrast does justice to the source material. All in all, the Neo-i looks very good for what it is and how much it costs. It isn't on par with a home theater projector, but that is not its objective--getting a fun and engaging picture on the wall is.

Dual Use. In addition to being a capable projector, the Neo-i is also an iPod dock. The two parts can operate semi-independently; the projector is always warmed up when you power the Neo-i on, but it can be turned off again if you just want to listen to music. The remote control includes a button that turns off the projector side of things without disabling the audio, so you can choose projector or speakers, depending on what you need at that moment.

Light output. The Neo-i is brighter than most pico projectors by a fair amount, with a specified maximum lumen output of 50. Our test sample measured 48 lumens in Dynamic mode. The projector does not have the variability in lumen output found on larger projectors, instead offering a couple of additional color modes (Movie and Photo) that alter color balance but leave lumen output largely unchanged. Movie mode has a slightly warmer color balance, while Photo opens up mid-tones somewhat. Both read within five lumens of the brightest reading.

Room-filling volume. With dual 8-watt speakers, the Neo-i packs a punch in the sound department. I brought the Neo-i home and set it up in my guest bedroom, where I turned it up as loud as it would go and put on some music. Not only did the speakers adequately fill the 10' x 10' space, but I missed a phone call because I couldn't hear the ringer going off in my pocket. It's been a while since I've lived in a dormitory, but I'm pretty sure the Neo-i's speakers are loud enough to annoy your hall-mates, let alone room-mates.

Remote operation. Once an iPod is mounted in the Neo-i, there are a few ways to control it. You can use the controls on the iPod itself or the control panel on the Neo-i. You can also use the projector's remote, which includes all of the controls necessary to navigate your iPod from across the room. The remote is tiny and light and fits easily in a shirt pocket. The buttons have a good amount of resistance to them, so you could even carry it in a pants pocket without having to worry too much about pressing buttons accidentally.

Connectivity. The Neo-i is not limited to use with an iPod or iPhone. On the rear of the projector is a connection panel featuring full-sized HDMI and VGA ports as well as a 1/8" mini A/V port for composite video (a breakout cable is included). This allows the connection of anything from a Blu-ray player to your laptop or game system, making the Neo-i not just an iPod accessory but an entertainment hub.

Audible noise. The Neo-i is nearly silent in operation--aside from the speakers, that is. There is a fan, but it is very quiet and turns itself off when the projector is not running (say, when you're listening to music). If you're using the projector but not the speakers in an effort not to disturb other people around you, you'll be happy to hear that the fan is not loud enough to cause distraction to anyone more than a foot or two away.

Reduced rainbows. The Neo-i is a single-chip DLP projector, but we did not notice any significant instances of the rainbow effect during testing. Then again, we don't use the Neo-i the same way that we'd use a home theater projector--i.e. on a large screen, in a darkened room, such that the image fills your field of vision. The smaller projected image means reduced eye movement, which in turn means a much reduced incidence of rainbows.

Speakers sound small. While the Neo-i's speakers are loud, they are small, and small speakers tend to sound small. The speakers use a bass boosting technology that does increase the audibility of the low end, but it also muddies up some of the nuances that larger speakers might have an easier time with. Meanwhile, the high end can sound tinny, especially in songs that have a big, full sound. Hi-hat cymbals in particular sound squashed. After trying a few different genres, I found hip-hop and acoustic guitar songs to be least affected by the speakers' weak spots, while rock bands took the biggest hit.

Occasional strange behavior. As a projector-slash-iPod-dock, users will sometimes want to turn off the projector and just listen to the music. To this end, the remote has a button that turns the projector off while leaving the speakers on. That's a great feature, and one many users would take advantage of. We then found that, whenever the projector is off and the remote is used to skip a song or change the volume, the projector powers itself back on, displaying a blank image for about half a minute before cycling off again. The user's command is likewise ignored while this power cycle is occurring, meaning you'll have to input the command twice. While this is not likely to shorten lamp life as the Neo-i uses an LED light source, it is annoying. What's interesting is that the projector does not power up if you use the iPod's controls - only the remote or hardwired control panel.

The Optoma Neo-i DV20A is more than just a projector: it's an entire personal media presentation system, all tied together in a package that weighs less than three pounds. It's not a home theater projector, and it's not really a home entertainment projector either. It is its own class of product, and I'm calling it a "personal entertainment projector." Suitable for small groups of perhaps four or less, the Neo-i creates an intimate experience that brings the movies to dorm rooms and guest bedrooms everywhere. At $449, it's also a great bargain.

For more detailed specifications and connections, check out our Optoma Neo-i projector page.

Comments (1) Post a Comment
tsp Posted Mar 20, 2011 4:57 AM PST
Obviously there are no rainbows because the light source is LED so there is no color wheel.