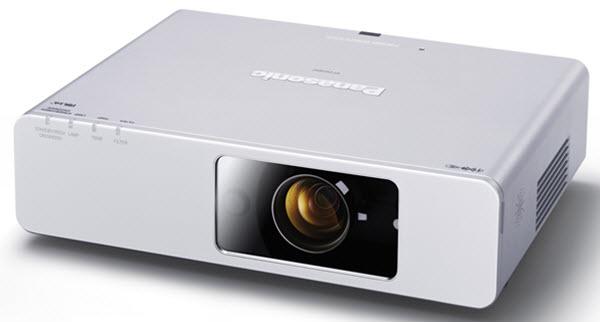 The Panasonic PT-FW100NTU is a bit of an odd duck. More fully featured than small presentation projectors, it represents an intermediate step between these small projectors and huge fixed-installation behemoths with interchangeable lenses. With 3000 lumens and a 2:1 zoom plus lens shift, the FW100 is a versatile, effective tool for both presentations and video. The Panasonic PT-FW100NTU (Henceforth, the FW100) is built for fixed installation. It is large, rectangular, and heavy, weighing in north of 15lbs. The projector has a cover on the front to prevent tampering and the entrance of dust - you can set zoom, focus, and lens shift, and then hide those adjustments and project through the front cover.

Since these measures are in place, the FW100 is uniquely suited to dusty or smoky environments. With the front cover keeping particulate matter off of the lens and the 1 micron auto-rolling filter keeping particles out of the case, the FW100 can survive in a smoky or dusty environment for much longer than the average projector.

The FW100's connection panel features one VGA input, one switchable second VGA input or monitor passthrough, composite and s-video ports, a 3-RCA component input, 9-pin Serial and Remote ports, one standard LAN port, and several audio inputs. The absence of DVI or HDMI is notable and not entirely pleasant, but as the FW100 is a presentation and data projector first and foremost, it's also not earth-shattering.

The FW100 has a 2.0:1 manual zoom/focus lens, making it extremely versatile in terms of installation. It can project a 100" 16:10 image from 9'2" all the way back to 18'8". The projector does lose about 24% of its lumen output when using the maximum telephoto zoom setting, so plan accordingly.

Lens shift on the FW100 is both horizontal and vertical. In the horizontal direction, the image can be shifted 1/3 of the image's width to the left or right. In the vertical direction, the image can be shifted entirely over the lens centerline, or entirely under it, giving the projector a total range of just over two screen heights. However, since the resultant angle at either of these positions is not extreme, a drop tube may still be required if ceiling mounting the projector. A rear shelf mount, on the other hand, would require almost zero effort to set up.

Panasonic's included remote control manages to be full-featured without being overly large or needlessly confusing. At the top are the power on/off and "auto setup" buttons. Immediately under those are the input selections, which are subdivided into "Computer" for VGA, "Network" for both wired LAN and 802.11 wireless, and "Video" for composite, s-video, and component. Under these are the buttons for the laser pointer as well as page up/page down. Other interesting features include the freeze frame and shutter functions, the "computer search" button that scans an active network for computers running Panasonic's projection software, and the "multi-live" function. Multi-live is a way to access up to 16 separate computers on a network and switch between them on the fly.

The FW100 uses a 250W UHM lamp that is expected to last up to 3000 hours. There is no eco-mode on this projector to extend the lamp life, but with 3000 hours of use per lamp, that is not a critical flaw. Replacement lamps cost $430 from Panasonic, so be sure to incorporate the cost of replacements into your budget.

The projector has a "side-by-side" mode which enables the display of two sources simultaneously. We were successfully able to play an HD DVD at 1080i over component, while projecting wirelessly from a laptop on the other side of the screen. However, one can only use one source from a given category at a time - so one "video" source (composite, s-video, and component) and one "network" source (wired or wireless LAN) is okay, while using composite and component simultaneously is not.

Fan noise is pleasantly low-pitched and unobtrusive. Sitting five feet from the FW100, we had no issues hearing others' voices, and at 10 feet it became a question of whether the projector was actually turned on. In a ceiling mount, the FW100 would be nearly silent to the audience's ears.

One of the big features of Panasonic's new projector is its wireless capability. The FW100 can connect wirelessly to 16 computers, either via "ad hoc" mode or through an established network. It does require the installation of some software, which took us all of two minutes and very little hard drive space. With the software installed, you pick a Panasonic projector from the list (in case of multiples, you can name them each something distinctive) and double-click it -- and that's all. You're connected. Once the link between projector and computer has been established, video and sound data is sent from your computer to the projector and its onboard speaker in short order. This link is easily fast enough for text documents and slideshows, though it's not speedy enough for video.

As mentioned above, the software is not limited to a single computer. The projector can switch between up to 16 computers at the push of a button, allowing multiple presenters to use their own laptops without switching wires.

One last feature is the ability to define an area of the screen to be projected from the included software. As such, professors could display their lecture notes for the day, while not showing the student gradebook open in the background. Similarly, you could project solely the contents of the text document or PowerPoint slideshow you are working on, while not showing everyone in the conference room the collection of kitten pictures you keep on your desktop.

With a projector like the FW100, features are meaningless without the power to back them up - but power is something that the FW100 has in abundance. Our test unit measured 2608 ANSI lumens maximum in Dynamic mode, with the zoom lens at its widest angle, which is plenty of light for 100" screens with moderate ambient light. In fact, in a darkened room, we pushed the image up to a 170" diagonal - that's 90" by 144" 16:10. Aside from the picture being far too large for the size of our viewing space, the FW100 didn't break a sweat.

Pushing the zoom to the opposite extreme resulted in a 24% drop in lumens, to 1996 ANSI. This is remarkable, since 2:1 zoom lenses typically result in a loss of 35% to 40% of the projector's overall lumen output.

Furthermore, the FW100 does all this while maintaining 89% brightness uniformity. In real terms, this means that the illumination on screen is almost perfectly even, with an imperceptibly slight drop towards the corners as compared to the center.

Contrast on the FW100 is rated at only 400:1, but that doesn't stop the FW100 from providing a solid image. The FW100 is designed for installation in large rooms such as casino sports books and sports bars, where ambient light is seldom under control. In cases like these, contrast ratings are largely irrelevant, as it is the projector's massive lumen output that creates the appearance of contrast on the screen. Since the FW100 is designed from the ground up for these types of installations, 400:1 is a perfectly reasonable contrast specification.

Color fidelity on the FW100 is excellent. Even when displaying video signals, colors are accurate and richly saturated. This contributes to the FW100's outstanding performance with video and photographic content, and makes it even more versatile.

After thoroughly testing the FW100 with 480p, 720p, and 1080i video as well as XGA, WXGA, and other data signals, it's clear that scaling is top shelf. Data signals are scaled cleanly, leading to very attractive presentations and photos. Video content, while more challenging, was still processed without incident.

On the topic of video delay, our testing revealed a slight video lag on the FW100. Using 720p/60fps component video, video delay was measured at 13ms, or slightly less than one frame. In practical terms, this will not affect your ability to play timing-intensive games like Guitar Hero, and on most games you probably will not notice the difference.

The Panasonic PT-FW100NTU is an entirely new breed of projector. It has the raw power and brightness of a fixed installation business projector, along with some of the nicer features of home theater projectors such as excellent zoom, good scaling, and a whisper-quiet fan. When you add the FW100's formidable wireless capabilities, you get the perfect stepping stone between enormous fixed-install light cannons with expensive interchangeable lenses and portable projectors with loud fans, short zoom ranges, and no lens shift.

Which is not to say that the FW100 has no flaws. Lamp life is short, at only 1500 hours, and replacements are costly. Contrast is 400:1, though this is not terribly important in the projector's intended viewing environment. The lack of HDMI or DVI limits its connectivity with both video and high-end PC graphics cards.

The FW100 fits in a wide variety of applications, but it really shines when installed in a large room with mild to moderate ambient light to work against. In large conference rooms or lecture halls, the FW100 can put its full light output to work, and presenters can take advantage of the advanced wireless capabilities. Sports bars can display stunning HD football games at 100" diagonal or more without worrying about smoke or dust.

At current street prices around $3900, the FW100 may seem a little steep. However, the projector being offered is unlike any other currently available, and it fills a specific need superbly. If you or your organization are in need of a highly versatile fixed-installation projector for a large audience, give the Panasonic PT-FW100NTU a good look.

For more detailed specifications and connections, check out our Panasonic PT-FW100NTU projector page.

Comments (1) Post a Comment
Jim Hawn Posted Feb 8, 2015 11:17 AM PST
Hi I was just donated this projector for my class room I was wondering if if can conect my ipad wireless ?