In 1970, and the very peak of the Vietnam War and the associated anti-military sentiment, Twentieth Century Fox took what some considered to be a risky gamble by releasing a war movie. Patton was a World War II film that lionized the flamboyant and controversial General George S. Patton, III. The gamble paid off. The film won seven Academy Awards including Best Picture. It also won for Best Actor, acknowledging George C. Scott's masterful performance as Patton, which many consider to be one of the greatest acting performances in cinematic history (Scott refused to accept the Oscar, due to his objection to the notion of acting as a competition.). A young and unknown writer, Francis Ford Coppola, wrote the screenplay at the age of 27, and won his first Oscar for Best Original Screenplay.

The film was a critical and commercial success, despite prevailing anti-war sentiments, due to the power of its complex portrayal of Patton as a man. Scott's riveting performance transcends the film and renders it something much greater than just another war movie. Scott was 41 at the time the movie was filmed. An extensive make-up job transformed him into the older and grittier General Patton, who was almost 60 by the end of the war. A film review posted in Variety on January 21, 1970, sums it up: "Patton was -- arrogant; industrious; dedicated; a prima donna; a believer in reincarnation; an extreme extrovert; vain; crafty; obedient; disobedient; compassionate; brutal; a student of military history; a respecter of ability, even in the enemy; contemptuous of weakness; admirable; despicable; blind to some considerations; intuitively perceptive of other matters; a mystic; an anachronism; in other words, a complex human being, outsize in nearly every dimension. It's all in the film, via script, direction, and Scott's performance, which is a new high-water mark in his career."

Patton was filmed in Dimension 150, one of only two feature films ever made in this process. Dimension 150 was a variant of Todd-AO, a super high resolution format that used 65 mm frame negatives which were then converted to 70 mm prints. The extra 5 mm was for audio sound tracks. Todd-AO itself was used for only 16 feature films, including Oklahoma! (1955), South Pacific (1958), and The Sound of Music (1965). All of these films, including Patton, are in the 2.20:1 aspect ratio that was native to the Todd-AO process. (See Blu-ray status of all Todd-AO feature films.)

The famous opening monologue which Coppola claims got him fired.

Since Patton was done in very high resolution to begin with, I have mixed feelings about the Blu-ray reproduction of this film. The Blu-ray picture is extremely clean, showing virtually no noise whatsoever. In this regard it is the polar opposite of the grainy/noisy Blu-ray version of The French Connection from the same era (1971, see review). The pristine clarity of Patton lends it an impression of high definition. Yet at the same time, the picture is slightly soft--not quite the razor sharp HD picture you wound expect from a 1080p transfer of a 65 mm master. It appears that some of the precise detail was lost in the removal of whatever grain there was in the original film. I would prefer to see a little more grain along with the rest of the fine detail definition that was once there.

Patton runs about 2 hours 50 minutes, so it is longer than average to begin with. But it must be seen on a very large screen to get the full experience. Today filmmakers (as well as makers of commercials, TV shows, music videos, etc.) often rely on rapid camera cuts to maintain visual interest, so we have been conditioned to equate rapid camera cuts with excitement. But this was not the case 40 years ago. In Patton, camera cuts tend to be comparatively infrequent. In the famous opening monologue, there is one stretch that goes for 90 seconds without a cut. Throughout the film it is not unusual to go 30 to 45 seconds between cuts.

Patton prepares to slap a shell-shocked private,
an incident that almost ended his career.

This slow-paced technique works best on a very large screen, where the eye is free to move about the large image to absorb the detail of the entire visual composition. Though the camera does not cut, the eye continues to move and visual interest is maintained. When this type of movie is viewed on a small screen, this cannot happen. Try watching Patton on a 42" flat panel TV, and it becomes visually tedious. For the best results, movies like Patton are best viewed on a 120" diagonal or larger display. This is not only easier on the eyes, but it reinforces the grand, epic character of the film itself.

Movie studios often take sadistic delight in forcing buyers of DVDs and Blu-rays to suffer through advertisements for other movies before getting to the main feature. On the Patton disc, Twentieth Century Fox tries to suck you into a promotion for Jumper, a vacuous film that I had the misfortune to see in a theater two years ago. During the last half of the movie I stared at my watch because it was far more interesting. If you ever have the opportunity to see Jumper, don't.

After fast-forwarding through the advertisement, you get to the screen on which the Play button resides. On every other video disc ever made, the Play button starts the movie. On the Blu-ray edition of Patton, the Play button starts a commentary by Francis Ford Coppola, in poor quality standard definition no less. Since this is unexpected, it is annoying. However, one click of the chapter advance button will take you to the start of the film itself. And in the end, Coppola's reminiscences of having been fired from the project, in part for the audacity of the opening scene, are interesting. 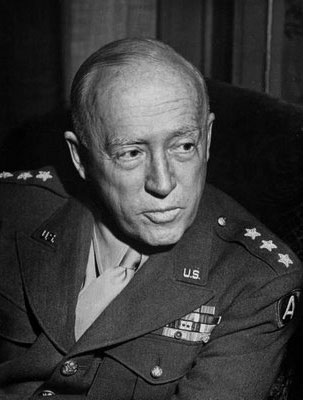 General George S. Patton, Jr. died of
injuries sustained in a car accident
several months after the end of WW2

There is a second disc of Special Features in the Blu-ray package. The primary feature is a documentary that discusses the portions of the film that are historically accurate, those that have a historical basis but have been fluffed up for dramatic purposes, and those that are pure fiction. This documentary contains original video footage of the real Patton in Sicily and Europe, as well as vignettes of Patton with Eisenhower, General Omar Bradley, and British General Bernard Montgomery. Though this disc is entirely in standard definition, it is quite interesting stuff for those interested in the history behind the film.

Though the Blu-ray of Patton is softer than it should be, it is much cleaner and overall superior to standard def video. It is well worth viewing for the exceptionally complex portrait of a crude, vulgar genius, a master military strategist who read history, read the Bible, and wrote poetry. Patton believed in reincarnation; he envisioned himself to be a warrior who had been reborn many times in centuries past, and would continue to be reborn in the ages to come. The film is a fascinating glimpse into the mind of a man who believed that God had put him in command of the U.S. Third Army in order to fulfill his destiny.


So as through a glass, and darkly
The age long strife I see
Where I fought in many guises,
Many names, but always me.

And I see not in my blindness
What the objects were I wrought,
But as God rules o'er our bickerings
It was through His will I fought.

So forever in the future,
Shall I battle as of yore,
Dying to be born a fighter,
But to die again, once more.

From Through a Glass, Darkly
Gen. George S. Patton, Jr.

First - what a wonderful review! I have been reading several books on the criticism of historical films. While I wasn't paying attention there has arisen a new academic specialty in the deconstruction of movies with historical themes. They ponder Derrida and Baudrillard (obscurantists). They should rather read you.

Second - In the movie Patton says something like, "Christ Brad I'm not a diplomat...". Which is funny because Patton between the wars was exactly that. He became prominent in the Army because of his diplomatic skills. He hosted a lot of cocktail parties in DC during the thirties. Something changed in him that led him to become less socially deft. Booze? Stress? Mental illness?

Third - I have a 110" screen (8 feet by 4.5 feet). It is too small I've decided. Yet a bigger screen would require a different projector in my Home Theater (converted bedroom). Currently your projector reviews talk about issues like black levels, brightness, and shelf mounting. Please add the ability to fill a really big screen.
jim chatterton Posted Mar 1, 2010 12:59 PM PST
Movie reviews....a new feature?? Please continue. Your reviews are very helpful......jic c
Robert Eisenhardt Posted Dec 23, 2016 12:00 PM PST
16mm Widescreen print - In the late 70's I rented a widescreen print of PATTON and obtained cinemascope lenses from college for a showing - my father's birthday. On an 11' wide screen, the full dimension of the film showed well, it was about that much wide and perhaps 4 to 5' high. Most ijmpressive.