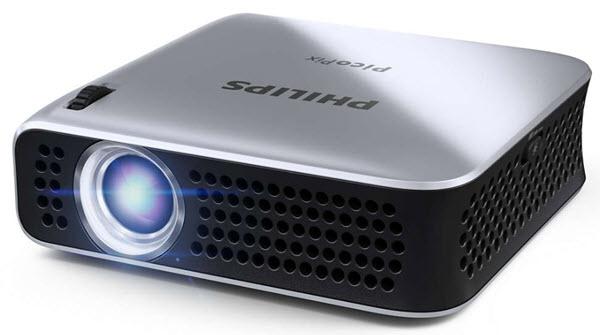 Designed primarily as a companion to a laptop PC, the Philips PicoPix PPX4010 is one of the smallest projectors on the planet. And with a lightening quick 17 ms input lag, it is one of the fastest. Measuring 0.87" by 2.7" by 2.6" and weighing 2.93 ounces, it can literally fit in a shirt pocket with room left over for a smartphone and a pair of glasses. The price is pretty small too, at only $299.99.

Plug the PPX4010 into a laptop, preferably using an HDMI port, and it will give you a bright enough image--rated at 100 lumens and measured at 71--for deskside or conference room viewing by a small group. The 854x480 resolution is low by today's standards, but it's a wide-format version of 480p or VGA, and enough for PowerPoint presentations and the like.

The PPX4010's picture quality is better in many ways than most pocket projectors deliver. However, it shares one limitation with any model with a native 854x480 resolution. Few PCs today support 854x480, which means you have to set the computer for a different resolution. In the absence of a one-to-one match between the number of pixels in the image and the number on the DLP chip, the projector will scale the image to fit in the number of pixels available on the chip, which introduces artifacts.

If you set the PC to a 16:9 resolution, like 1280x720, you'll also want to set the Display option in Windows to Larger - 150% to improve legibility. Even with that setting, however, scaling artifacts make text and fine detail a little hard to read. Both black text on white and white text on black were readable at sizes as small as 9 points in my tests, but they were unusually ragged at smaller sizes. 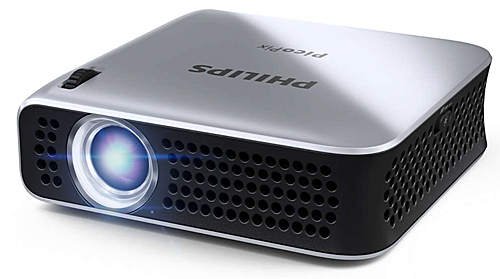 Another choice is to set the PC for 640x480 to match the native vertical resolution. With some 854x480 models, this would avoid scaling, with the projector using only 640 pixels across to give you a 4:3 image. However, the PPX4010 will stretch the image out to the chip's full width, distorting the aspect ratio and turning circles into ellipses that are wider than they are tall. The payoff is that the image holds detail better.

With the computer set to 640x480, both white text on black and black text on white were easily readable at 7.5 points in my tests, and still readable at 7 points. So if you want to show text documents, spreadsheets, or the like, you'll be better off setting your PC to 640x480. For typical PowerPoint slides, with larger text and no fine detail, either 1280x720 or 640x480 works nicely. If you use patterned fills rather than solid blocks of color on your slides, however, either resolution will add obvious scaling artifacts to the filled areas.

Color Preset Modes. The PPX4010 has only one color preset. There are no menus and no settings other than a focus control and a three-position switch on the side for adjusting brightness. For data images, green is a little yellowish while blue and red are a little dark, but color quality is acceptable overall, and colors are suitably vibrant and nicely saturated.

Rainbow artifacts aren't a problem. The only time I saw them was when I shifted my gaze rapidly back and forth with one data image that's designed to bring them out. I didn't see any with video

Video. Although the PPX4010 isn't really designed for showing video, its HDMI port makes it easy to connect to a video device, And, of course, you can play video on your PC as well. The image quality is best described as watchable. However, I saw a green cast in some of our test clips and a blue cast in others, moderate-to-major loss of shadow detail in some scenes, and obvious posterization in others. It helps a lot that the projector does an excellent job of avoiding showing rainbow artifacts. There's no 3D support.

Input lag. As measured by the Bodnar meter, input lag is an almost unbelievably short 17.2 ms. That's the fastest I've ever seen with a projector.

Tiny. If there were a featherweight category for projectors, the sub-3 ounce PPX4010 would be in it. If there's any projector you can always take with you, this is it.

Mini-HDMI port. The single port on the projector is mini-HDMI for easy connection to image sources with its supplied HDMI cable. If your laptop offers DisplayPort instead, you can get an optional adaptor from Philips for $49.99. If the PC is limited to VGA, you can easily find third-party VGA adaptors.

LED light source. As with most pocket projectors, the PPX4010 uses an LED light source designed to last the life of the unit. Philips rates it at 30,000 hours.

Warranty. The projector comes with a one-year warranty including the LEDs.

Brightness. The PPX4010's brightness can vary depending on the power supplied by the USB port you connect it to, but to compensate for low-power ports, Philips provides a cable with two USB connectors on the PC side. Note too that there's no zoom, so there's no zoom-lens effect. For the three settings controlled by the brightness slide switch, I measured the ANSI Lumens at: 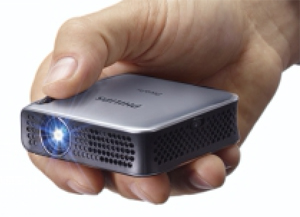 Rainbow artifacts. Rainbows show rarely enough that it's hard to imagine anyone would see them often enough to find them bothersome.

Fan noise. Audible noise is rated at less than 28dB, which is low enough to get lost in the background noise of a typical office. If you listen for it in a quiet room you can hear a hum with a slightly higher-than-typical pitch, but unless you're particularly sensitive to this issue, you'll probably never notice it otherwise.

Lamp life. The LED light source, rated at 30,000 hours, is meant to last the life of the projector.

The PPX4010 throws a 45" 16:9 image from roughly 4.5 feet. We've pre-loaded the PPX4010 throw data into the Projection Calculator so you can determine the throw distance for the screen size you want to use.

As far as the vertical offset is concerned, with the projector sitting on a table, the centerline of the lens intersects the bottom of the image. This will work well in most small conference rooms with a typical screen placement in front of a table. It will also work well with small portable screens meant to sit on the same table as the projector. 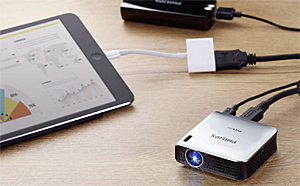 Focus is tricky. As with many, if not most, pocket projectors, the focus wheel has enough play in it to move a substantial amount without changing focus at all, and then suddenly change it a lot with very little movement. The projector is also so light that even the slightest force--like brushing against the data or power cable--tends to make the projector move, so you have to reposition and refocus it. For my tests, I wound up holding it place by taping it to the table.

No battery or AC adaptor. The PPX4010 doesn't include a battery or an AC adaptor. You have to power it by connecting a USB cable to a computer or some other power source--like a USB power block you have to buy elsewhere. This is not much of an issue with a laptop, but can make setup cumbersome if you want to use the projector with an image source that lacks a USB port.

No Audio. The lack of a built-in speaker or even an audio output means you can't route sound through the projector to a headset or sound system. You have to connect an audio system directly to the video source.

No Zoom. The lack of a zoom lens means the only way to adjust image size is to move the projector.

The Philips PPX4010 can be a compelling choice. Its super short input lag of 17 ms makes it highly attractive for mobile gaming. Along with its small size and light weight, it offers quick and easy setup; more-than-acceptable image quality; and suitable brightness for image sizes up to about 25" for extended viewing in moderate ambient light, or up to about 45" for either dim lighting or for short presentations.

The lack of audio support and the requirement for a handy USB port or third-party AC to USB power adaptor make the PPX4010 a little cumbersome to use with video sources. However, that's not much of a shortcoming for a projector that was designed to use with a laptop. Gamers may feel that the fast lag time makes up for those oversights in any case. And for anyone who wants a projector to use with a laptop, the PPX4010 is an excellent pick as a laptop companion for deskside presentations.