The classic home theater is dark, just like a commercial movie theater. But there are many folks who either don't have the ability to create a dark viewing room, or simply don't want to. Many would prefer to watch movies with the lights on so they can interact with family or friends at the same time. The ideal solution could be a large plasma TV, but plasmas at 70" diagonal or larger are way too expensive for most people. So, if you want some ambient light in the room, what can you do? A front projector combined with Planar's newly introduced Xscreen may be just the solution.

The Xscreen functions just like a regular projection screen, with the exception that it substantially boosts contrast, color saturation, and black levels in ambient light. It has the ability to defeat cross lighting from ambient sources, and reflect a brilliant picture that looks quite a lot like a plasma TV. With all of the lights fully on in our lab, the difference between the image on our Stewart Grayhawk RS and the Planar Xscreen was like night and day-dull and washed out on the Grayhawk, but crisp, bright, and beautifully high in contrast on the Xscreen. It was quite literally like watching a television. 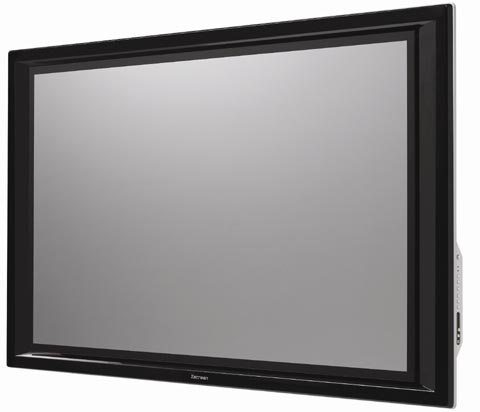 The Xscreen is a rigid glass screen that comes in a protective frame. As you can see in the pic above, it looks like a plasma TV. And in fact, there is an option to add on-board speakers and a video processor for an extra fee (the pic shows the connector panel, but our review sample did not include these extras). Fortunately, the Xcreen weighs a lot less than a plasma TV. It is intended to be mounted on a wall, and comes in four sizes as follows:

What is the downside?

Life is full of trade-offs, and there is an important one to be aware of here. The Xscreen has a relatively limited sweet spot compared to a conventional projection screen. If you are sitting in the sweet spot-which is directly in front of the screen-it looks spectacular. But as you move out of the sweet spot, the picture degrades in a hurry. The reason the picture looks so good at the center viewing position is that the screen is focusing most of the light directly back in the direction of the projector. Moving out of that narrow cone of reflected light causes the image to dim considerably. So the Xscreen is a solution that will not work well if you have seating placed at various angles to the screen around the room.

Now, with that bit of technical background, we measured the Xscreen's half-gain angle at 22 degrees. By comparison, the Stewart Grayhawk's half gain angle is 64 degrees. So as you might expect, a screen like the Grayhawk is much better at diffusing the light more evenly. This allows everyone in the audience to see pretty much the same picture no matter where they are in the room--and it looks good as long as the room is dark. Conversely, if you are viewing the Xscreen at an angle of, say, 30 degrees from the center position, it will look relatively dim. And for all practical purposes the image becomes unviewable at an angle of 50 degrees.

There is a related phenomenon to be aware of also. If you are not sitting very close to the center viewing position, you may notice some unevenness in illumination. If you are sitting to the left of center, the left side of the screen may appear brighter than the right side. This is another effect of the narrow half-gain angle. The effect will vary based on screen size, viewing distance, and the throw distance of the projector. However, it is manageable if you ensure that the seating positions are situated as close to center viewing axis as possible.

We noticed one other issue with the Xscreen that could be a bit of a nuisance. There is a reflective surface between the frame and the active screen area itself. This is about one inch wide and forms a perimeter around the image just inside the frame. Normally it appears black and cannot be seen. But if you happen to be sitting at just the right angle relative to the screen and the projector, you will see the projector's lens reflected as an extremely bright spot on the edge of the screen. This can be eliminated by shifting in your seat either a bit to the right or left, so that you are out of that precise viewing angle. But it would have been better if the frame were constructed to cover that highly reflective perimeter so that the problem could not occur.

The Planar Xscreen is certainly a much more cost-effective solution to ambient light problems than is a 70", 80", or 100" plasma TV. But it will only work well in a room where the seating is pretty much directly in front of the screen. The projector should be on a rear shelf behind and just above the heads of the audience in order to minimize the angle of projection. However, the good news is that if you have a room that can accommodate these installation restrictions, you will end up with a spectacular, high contrast jaw-dropping image that looks just like a huge plasma TV for a fraction of the price.

The bottom line is this ... if your room layout is right and you want to leave the lights on, by all means take a close look at a Planar Xscreen. It will deliver a brilliant, high contrast image in ambient light unlike anything a conventional screen could ever match.

Comments (7) Post a Comment
wbassett Posted Feb 20, 2007 1:57 PM PST
I read about this screen a while back, and was waiting for an independant review.

One thing I saw from this review is it is a retro-reflective screen. That's a shame and disappointment not only to me but I am sure many others that already have their system setup and wired with the projector ceiling mounted. If it would have been ceiling mount friends (on the projector end) I may have taken the plunge on one.
Natja-ss-1334 Posted Feb 20, 2007 7:50 PM PST
Thanks for posting this review. When I first heard about this screen I was really excited. But as our friend above stated, this is a real let down to hear about the limited viewing axis. Much the same as most high contrast glass beaded gray screens. If your not literally right at dead center not only left to right but also up and down the image quality goes down the toilet. I had a greywolf2 1.8 gain glass beaded screen that did the same thing with the limited perfect viewing perameters and it drove me crazy. I took it down within 2 days, painted it flat medium gray and then gave it to a friend that needed a screen and went back to my old flat gray-non reflective screen which frankely has a huge viewing axis and gave the same results as far as increase in contrast and blacks as the gray wolf did without the limited viewing axis issues. This new Planar screen is shamefully over priced considering it's limitations. frankely I felt it was over priced when I thought perhaps it had no limitations that have been described in the this review. let's face it- it's a screen, yet it costs more than some plasma TV's and projectors even for the smallest size. If it were $50 I wouldn't want one. However I think it might work well for those that have a long slender viewing room where the seats are further back from the screen and more centered in rows. Then the screen would be a good investment. But let's face it, this screen should be considered only by people who have a big budget, superior high end projector, and they understand just how annoying the limitations described in the review can be.
P_Baylor Posted Apr 8, 2007 11:58 PM PST
Thank you Projector Central for reviewing the Planar Xscreen. I was looking for such a review for a while and after reading all independent reviews, I decided that the limitation was not such a big deal for me and I did go out to get one. My living room layout is that of a rectangle so I don't have much problems with viewing angle and that makes a gain screen ok for me. I was choosing between other 'fabric' gain screens and also competing brands of ambient light rejection screens but decided to go with the Xscreen. I am all behind the Xscreen because unlike other 'gain' screens, the picture on the Xscreen looks good both in ambient light and in a dark setting. Other gain screens have distorted color probably because of its material composition.
Debbie Posted Mar 22, 2009 12:13 AM PST
Okay...the whole degree thing is beyond me, so please tell me if the sweet spot will be larger if I go with the 100" screen rather than the 80". if four people are seated side by side in front of the 80" screen, will the image quality be degraded for the two on the ends?? And what if they were situated the same way in front of the !00" - will the picture be equally awesome for all four? If I do go with the 100", how far back will I have to sit in order to be able to take in the whole screen(without having to look left and right such as one does sitting midcourt at a basketball game!). Would really appreciate your input so I can determine if I am going to get what I am after with the x-sreen.
James Posted Apr 6, 2009 10:59 AM PST
I have the 100" xscreen. We sit about 12 feet back and it that is comfortable for us. There is no noticable difference in picture brightness when folks are sitting in front of the screen. We start seeing a difference once you move from in front of the screen to a position off the side that is more than 30 degrees off the side the screen. This is not a problem for us based on my theater layout. I like the xscreen. It works well ... not as good as the picture in the brochure showing it in full sunlight, but good enoungh to make a real difference for us. Also, you'll love that people think it is plasma screen until they see your projector. Note that I wasn't able to check out any of the other technologies that do similar things (e.g., Screen Innovations Black Diamond, etc.) so I never compared xcreen to the competition.
Mohammad Posted Jan 31, 2014 12:42 PM PST
I was searching for pricing information on this screen and found this review. I have a couple of 100â new in the box with a Runco CL-610 DLP Projector but I never used them due to availability of space. Where would be a good place to put these for sale? I am also curious to see how well it projects on this screen. I may want to keep one and sell the other two 80â and 100â.
Vitaliy Posted Jul 27, 2015 3:12 AM PST
tell me the size and mares fixation of Planar and where can I find the manual? Planar screen System, inc 1195 NW Compton Drive Beaventon OR 97006 USA