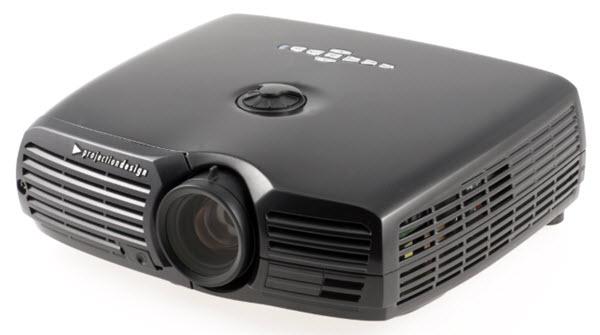 When seen from across the room, the projectiondesign evo2sx+ looks a lot like any other portable projector on the market. But once you power it on and begin to understand exactly what it is capable of, you realize that it is in several important respects unlike any other projector ever made. The evo2sx+ holds the unique distinction of being the smallest and lightest SXGA+ projector ever built as of this writing. But that is just where it starts. This unit is loaded with features that make it a pleasure to work with like physical lens shift, a quiet fan, and a beautifully designed remote control. Due to its compact portability it sells for more than the other SXGA+ DLP projectors on the market at the moment. But if you want high 1400x1050 resolution for the materials you present and you need to travel with your projector, you may find that the evo2sx+ is the perfect answer for you.

Connection Panel: One composite video, one S-Video, one VGA-in port, one set of RCA component inputs, one input, one network port, one RS-232, one USB, one audio jack.

The evo2sx+ is all about high resolution in a small package. The native 1400x1050 DLP DarkChip3 is made to present materials like detailed text documents, financial spreadsheets, computer graphics, engineering and architectural drawings, and digital photography in as much detail as possible. This native 4:3 format projector can double as a video projector as well, but it is not a model one would normally select if video or 4:3 format home theater is the primary application.

One of the projector's unique features is a color wheel rotation speed that is a bit higher than that found on competing DLP models. The standard wheel rotation speed on most commercial DLP products is 2x, which is 7200 RPM. The evo2sx+ wheel rotates at 9000 RPM, or 25% faster than the competition. The advantage to the increased speed is a partial reduction of rainbow artifacts for people who are sensitive to them. The 25% increase in speed is not enough to eliminate rainbows in video applications, but in side by side comparisons with competing units that have 7200 RPM wheels, viewers who normally see rainbow artifacts reported seeing them somewhat less frequently on the evo2sx+.

In terms of brightness, the evo2sx+ is rated at 2500 ANSI lumens. This is ample brightness for most portable applications, but not as bright as competing DLP projectors in the same SXGA+ resolution class. Actual lumen output will vary greatly based upon your chosen lamp power setting and gamma options. The unit has the ability to adjust lumen output on a scale of 1 to 10. In its brightest configuration which one would typically use for data and graphics display, our test unit measured 1665 ANSI lumens. This can be stepped down incrementally to a low of 840 lumens in eco mode with the lamp power setting at zero. The advantage here is that you can adjust the light on the screen to accommodate the room light in the conference room and the size of screen you are working with. Sometimes portable units rated 2000 lumens or more simply put out too much light to be comfortably viewed for any length of time in a typical conference room without causing eyestrain, and the evo2sx+ eliminates this concern.

When optimized for video usage, our test unit measured 1105 ANSI lumens with the lamp set to maximum power, and 835 ANSI lumens in eco mode. So even in eco-mode it produces double the light output of a typical home theater projector.

Contrast is rated at 2500:1. We've often cautioned about relying too heavily on specs to compare projectors, but in the group of SXGA+ projectors we've been reviewing this month, the contrast specs are, from a practical perspective, reliable indicators of their comparative performance. The evo2sx+ is comparable in contrast to the Dell 5100MP which carries the same 2500:1 contrast spec. Meanwhile the Optoma EP910, rated at 3000:1, does in fact show incrementally higher contrast.

The evo2sx+'s unique competitive strength is its portability, with a light 6.6 lb weight and highly compact casework that takes up only 371 cubic inches. Other features that make the evo2sx+ particularly well suited to portable conference room use include its low fan noise. This is quietest SXGA+ projector we've yet seen, and if you are in a small conference room, the quieter the projector the better. It also powers up quicker than most projectors, going from off to full illumination in less than 30 seconds. The full-function backlit remote can operate as a wireless mouse, and it includes a built-in laser pointer as well. Two 1-watt on-board stereo speakers provide some audio capability if you need it. However, there is no digital zoom and no VGA pass-through, which are features that competing SXGA+ projectors offer.

There is some vertical lens shift on the evo2sx+, but its range is limited. With the lens at its highest position, the centerline of the lens intersects the bottom edge of the projected image. From that position you can lower the image by Â½ the picture height, so that in its lowest position the centerline of the lens hits the center of the projected image. This means that the lens shift is useless if you are either mounting the unit on a conference table or planning to ceiling mount it. Moreover, when placed on a conference table with the lens set in its highest position, the bottom edge of the image will be at table height unless you tilt the projector upward. (Conversely, the top edge of the image will be near the ceiling if the unit is ceiling mounted, unless you tilt it downward.) You can always use keystone adjustments to get rid of the trapezoid that results from tilting the projector, but it will add some scaling blur that may be contrary to the primary objective of using a 1400x1050 resolution to begin with. (On the other hand, some presenters who are working with text and financial documents find that the bold effect imparted by the keystone scaling makes the text more visible from a distance.)

The good news is that if you plan to place the evo2sx+ on a rear shelf at a vertical height that is equal to the top half of your projected image, the lens shift feature then becomes of benefit, allowing you to position the projector independently of the screen and still square it up fully without the use of keystone. If you do plan to install the evo2sx+ on a rear shelf, take note of the throw distance specs to ensure that your desired screen size can be achieved with the throw distance required by your room's depth.

At this time the MSRP on the evo2sx+ is $5,795. However, in the projector industry MSRPs can vary greatly from actual street prices. Furthermore, there is a radical difference between brands in the percentage of discounting off of list price-some don't discount much at all, some discount 10% to 20%, and some will discount up to 40% or more. So you should not use MSRPs as a guide to relative cost. Call dealers and get price quotes before making any assumptions about how much a unit will cost you. Street prices are ever-changing and we don't quote them in reviews because of that.

If you're familiar at all with projectors you know that lamps don't last forever, and replacement lamps are costly. Typical cost for a replacement lamp is about $400 on many models. The evo2sx+ replacement lamp is a bit higher at $595. On the other hand, projectiondesign states that the lamp will last up to 4000 hours in eco-mode, which is a longer lamp life than you will get on competing units. We suggest you think about your intended usage and estimate lamp costs over time as a factor in your decision.

Though the primary application usage for the evo2sx+ is portable high resolution data display, it can also be used for digital photography slide shows and various commercial and home entertainment video applications. It has plenty of snap to produce that WOW reaction that you'd like from your audience, as the image manifests excellent sharpness and color saturation. Standing alone it is a stellar performer. However, it is not as bright or as high in contrast as competing models that sell for less. So if portability is a primary objective, you can have that along with the assurance that you'll have a great photo and video projector as well. On the other hand, if portability is not a concern of yours, there are brighter and less costly alternatives that may suit your needs better.

The evo2sx+ is unique in that it is the smallest and quietest SXGA projector that has come to market. As such it will be of keen interest to any traveling presenter who needs 1400x1050 resolution. Its wide range of lumen output will make it suitable for a variety of conference rooms and audience sizes. Though lamp price is higher than average, 4000 hours in eco-mode is a lot of projection time. Many users of the evo2sx+ will probably end up buying a new, next generation projector before they ever encounter the need for a second lamp.

The evo2sx+ delivers a sharp, rich, bright image. In today's competitive landscape it would need to produce marginally higher contrast to earn a full 5-star rating in performance, but this is only evident in a side by side comparison. Standing alone, the image of the evo2sx+ would not be viewed as lacking sufficient contrast.

In terms of features, the evo2sx+ has almost everything the intended user would want, with the exception of the ability to throw the image upward from the centerline without tilting the projector. On a portable projector such as this we would have preferred to see either a built-in offset throw angle or a lens shift range that could position the bottom edge of the image somewhat above the centerline of the lens.

Ease of use is hard to beat. Its small size and light weight make it ideal for the presenter on the go. The projector sets up in a snap and powers on quickly. The remote is well-designed and the menu easy to follow.

In the end, the value proposition is a mixed bag. If you value portability and light weight over all other considerations and are willing to pay a premium for the smallest SXGA+ projector available, the evo2sx+ wins hands down. It is without a doubt an impressive projector with a beautiful image and a lot of features in a small package. However, it is not the brightest or highest contrast SXGA+ projector on the market. Competing units which sells for less are not all that much bigger and heavier than the evo2sx+. Thus, in view of its relatively high street price, we are not able to give the evo2sx+ as high a mark in value as in the other ratings categories. Nevertheless, there are many users out there who'd be willing to pay anything if only someone would develop a very small and quiet portable SXGA+ projector. Projectiondesign has done more to address the needs of those users with the evo2sx+ than any other manufacturer. If you are one of them, call your projectiondesign dealer today for current prices and availability.

For more detailed specifications and connections, check out our projectiondesign evo2sx+ projector page.