Of all the specs published for projectors, the Full On/Off Contrast spec is the most meaningless and misleading spec on the page. Contrast specs don't tell you much about what you'll see on the screen, and they certainly don't tell you anything about how one projector will look if compared to another side by side.

Nevertheless, since buyers usually cannot see and compare projectors before they buy, they get consumed with contrast ratings for obvious reasons. Who doesn't want a high contrast projector? And manufacturers are well aware of the consumer's sensitivity to contrast specs, so they've had to pump them to absurd levels just to stay competitive.

What is Projector Contrast Ratio?

Contrast ratio in its simplest form is the ratio of the light reflected from an all white image and an all black image. So a projector with a 3000:1 contrast ratio means that the white image is 3000 times brighter than the black image. The higher the contrast ratio, the more detail you can see on the projected image whether it is numbers, pictures, graphs, text, or video. Contrast is what makes it possible for us to see the subtle shades of colors. So good contrast is all about seeing the details. What is the Best Way to Measure Projector Contrast Ratio?

There are two common methods of measuring contrast -- Full On/Off and ANSI Contrast. Full On/Off is easy to manipulate, it produces misleading numbers, and is commonly used in the industry. The ANSI method is difficult to manipulate, produces very small but much more valid and informative numbers, and is rarely used in the industry other than by manufacturers in specialty niches. Let's take a look at the difference between them. 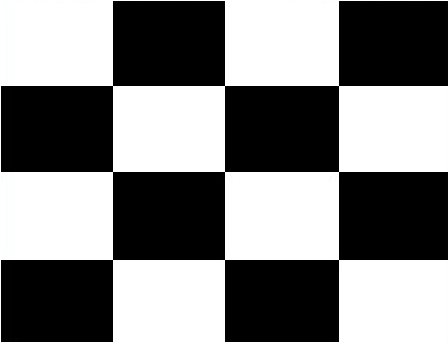 The ANSI Contrast method does not use the 100 IRE white and 0 IRE black screens. Instead, it uses a single checkerboard pattern of 16 rectangles, eight white and eight black. The brightness values of all the white squares are measured and averaged, and the brightness of the black squares are measured and averaged. The ratio of the averaged white readings to the black readings is the ANSI contrast ratio.

Why Contrast Specs are Terrible

Where projectors are concerned, the Full On/Off and ANSI methods yield radically different numbers, and the ANSI reading is always substantially lower (not even in the same ballpark, actually). The reason is that, though we usually get similar readings between the white 100 IRE test pattern and the white rectangles on the checkerboard pattern, the black readings on the ANSI checkerboard are always higher than black readings on a full black 0 IRE test pattern.

Why is that? First, there is always the potential for light scatter in the projector's light engine and lens when anything other than black is being projected. When the projector is displaying a fully black 0 IRE test pattern, there is no light to scatter internally that could compromise the black level. On the other hand, when the checkerboard is being displayed, the picture is 50% white and there is a lot of light being projected. A little bit of that light gets reflected and bounced around inside the zoom lens or light engine and ends up compromising the black rectangles in the projected image. In addition, any dust that happens to be floating in the path of projected light will cause light scatter.

Now when we switch to the ANSI checkerboard, we still get 1000 units on the whites, but due to light scatter we might get 0.5 units on the blacks instead of 0.05. In this case, the contrast ratio just dropped by a factor of ten to 2,000:1 with a relatively subtle, almost invisible change in black level that would be imperceptible to the human eye except in a very dark environment. It is a change to the black level that would be neutralized by any reflected light in the room. When seen in these terms, the difference between 20,000:1 and 2,000:1 contrast doesn't seem like the enormous gap that the numbers themselves would suggest.

The fact is, even tiny changes to black levels have major impact on contrast ratios. Everyone has noticed the little red EXIT sign in a "dark" commercial movie theater. That sign can easily put out enough light to cut effective contrast on the screen by 50%, compared to what it would be if the theater were perfectly dark.

Auto Irises and such...

When it comes to manipulating Full On/Off Contrast ratio, the huge factor is the behavior of the projector itself. Many projectors adjust their light output based on the average light level in a given scene. They can do this by adjusting the lamp power on the fly, or by opening and closing an auto iris, or by shutting off a laser. So when a dark scene is being projected, lumen output can be instantly curtailed to make the black look blacker. Then when a bright scene comes along, lumen output will be returned to full power in order to achieve a more brilliant image. On most projectors that have these features, these adjustments to lumen output happen so quickly that the viewer rarely notices them.

Now, these brightness altering features work and are desirable, we're not saying they are a bad thing. It's just that they confuse the contrast rating game. When projectors adjust on the fly in this manner, the Full On/Off spec ends up measuring the blackest black in a dark scene and comparing it to the brightest white in a bright scene, which never actually happens simultaneously in any single frame of video. Some manufacturers call this Dynamic Contrast instead of Full On/Off to clarify that the contrast rating is being augmented by these dynamic lumen adjustments in the projector.

This is where the ANSI contrast method comes in handy. Since the ANSI method uses a single frame of rectangles that is 50% white and 50% black, it takes the projector's ability to dynamically alter lumen output from frame to frame out of the equation. As a result, ANSI contrast numbers are far lower than Dynamic contrast specs. In theory, they give you a better idea of what you should see in any given frame of video.

Of course, the ANSI rating does not indicate anything about the beneficial effects of dynamic lumen adjustment, so you can argue that it does not tell the whole story either.

As much as we would love to, ProjectorCentral does not take ANSI contrast measurements during reviews. The reason is that an accurate measurement of ANSI contrast requires either a pitch black room, with all walls, carpets, ceilings, clothing, etc., being totally black and non-reflective, or a pitch black tunnel or tent designed specifically for this purpose. Why? Because if the light from the white checkerboard squares reflects off anything in the projection space it will lighten the black squares, which invalidates the contrast reading. The only legitimate ANSI contrast reading, at least one that we would want to publish, is one done by a professional lab equipped specifically to do this type of testing.

How big is the numeric difference between the contrast methods?

In general, Dynamic contrast ratings generate the largest numbers, Full On/Off with dynamic features turned off will generate numbers lower than Dynamic, and ANSI will produce very tiny numbers relative to what consumers are used to seeing. How small? Well, in the home theater world where contrast is favored over lumen output, an ANSI rating of 300:1 would be average, 700:1 would be very good, and 1000:1 would be stellar. But how many consumers would buy a home theater projector with a 700:1 contrast rating? Not many, in today's competitive marketplace of million-to-one contrast ratings.

Christie Digital is one of the few vendors that actually publishes all three Dynamic, Full On/Off and ANSI Contrast specs. As an example, their 6000-lumen commercial Christie DHD600-G is rated at 4800:1 Dynamic contrast, 1200:1 Full On/Off, and 250:1 ANSI Contrast. So even in the commercial projection world you can see these methods vary drastically in terms of numeric results. Christie can afford to publish this data because they sell to knowledgeable buyers through professional AV resellers, and everyone in the Pro AV biz knows the difference between these specs and what they mean.

On the other hand, consumers have no clue about the differences in contrast methods. And to no surprise, they just want the highest numbers possible. So it would be deadly for a manufacturer selling to the consumer audience to publish ANSI contrast specs, which is why they don't. A projector with extreme Dynamic range might measure 500,000:1 Dynamic contrast, while at the same time delivering 800:1 ANSI contrast. Now, if a projector has an 800:1 ANSI rating, that means it has a sparkling, high contrast image, but the consumer would never know it. A manufacturer would only publish that ANSI number if they had a burning desire to go out of business.

What can you do?

First, be aware that, though it is technically difficult to measure ANSI contrast with precision, it is very easy to see it. High ANSI contrast is characterized by solid blacks, brilliant whites, rich natural color saturation, well-defined shadow detail, and a deep three-dimensionality in the image. Low ANSI contrast has more anemic black levels, lower color saturation, muddy shadows, and a shallower, more two-dimensional image. When you look at a projector and think, "Wow, that is excellent contrast," it is quite frequently high ANSI contrast you are reacting to, not Full On/Off.

Second, when you set up two projectors side by side, it is usually obvious which has the higher contrast without having to measure it. The primary clue is the comparative depth (or perceived three-dimensionality) of the two images.

Third, until proven otherwise, assume there is NO correlation between Dynamic or Full On/Off on the one hand and ANSI contrast on the other. A very high On/Off rating does not means it also has very high ANSI contrast -- it might, but you don't know. You can have a projector with a low Full /On Off that has a very high ANSI reading and looks spectacular. Don't be surprised if you put Projector A rated at 50,000:1 up against Projector B at 500,000:1, and discover that Projector A looks much higher in contrast. It happens all the time.

In other words, Dynamic and Full On/Off contrast specs are notoriously misleading. They tell you almost nothing about what the average video image will look like. If everyone published ANSI specs, that would be enormously helpful, but the risk to the manufacturer is huge simply because the consumer will misunderstand them. Unless manufacturers suddenly take an enormous gamble to publish ANSI contrast specs in the hope consumers will figure them out, do yourself a favor and ignore the contrast specs you see today. Full On/Off and Dynamic specs say nothing about what the picture looks like, and they are absolutely no way to compare projectors.