The Consumer Electronics Show (CES) in Las Vegas just wrapped up this weekend. Here are the most noteworthy developments in the world of projectors...

The ViewSonic LightStream PJD7827HD is rated at 2200 lumens and offers a six-segment RGBRGB color wheel, 1.3x zoom range, vertical lens shift, three HDMI inputs (two of which are MHL enabled), five viewing modes and ISF certification. It has a retail price of $1,299, but is expected to sell at street prices well below that when it starts shipping in the Feb/March timeframe.

ViewSonic also released a lower priced 1080p model, the LightStream PJD7828HDL, which is rated at 3000 lumens and priced at MSRP of $999. Unlike the 7827HD, this unit has a relatively small white segment in the color wheel that enables it to produce some incremental brightness consistent with solid color reproduction. The 7828HDL will begin shipping momentarily if it has not already.

In addition to the two new units from ViewSonic, Vivitek has entered the sub-$1000 1080p horse race with its new H1060, rated at 3000 lumens and 15,000:1 contrast. It has two HDMI ports as well as all of the legacy analog inputs including VGA, component, s-video and composite, and it will be shipping this month.

Vivitek also unveiled a more substantial home theater projector, the H5095, but it won't be shipping until the June/July timeframe. With a retail of $2,995, it will compete with products such as the Epson 5030UB and Sony VPL-HW40ES (more info on this to come).

Vivitek was also showing the tiny Qumi Q6 which just started shipping a few weeks ago. This 1.1 lb portable LED projector has a 1280x800 resolution and is rated at 800 lumens. It currently sells for under $600.

Sony was showing the new native 4K products that they released at CEDIA as well as their new 1080p model the VPL-HW65ES. But they staged an unexpected and interesting comparative demoâ¦ the HW65ES ($3,999) against the 4K-enabled Epson LS10000 ($7,999) and JVCâs e-shift 4K model the DLA-X950R ($9,999). The issue at hand was this: How well does the new Reality Creation processor on the HW65ES boost detail definition of a 1080p source compared to the detail enhancement one gets from the 4K enhancement of the pricier 4K enabled machines? If one believes oneâs eyes in the demo, the HW65ES actually does at least as well and perhaps a better job of detail enhancement of a 1080p source than its much more expensive competitors.

Now of course when a vendor (or showroom reseller) controls both the content and the calibrations for side by side competition demos one must suspect the competing units have not been optimized -- quite often they have not been. One vendor at this CES was showing their product against a particular competing projector that I have never seen look as bad as it did in that demo. So side by sides conducted by vendors and resellers are often untrustworthy.

But the fact is that I was impressed with the power of the latest Reality Creation 2 processor on the HW65ES when I reviewed it last month (see review). So in this case it was not surprising to see it compete well against the upscaling of the Epson and JVC machines. Of course with any native 4K source the Epson and JVC units have an obvious advantage since the HW65ES cannot accept and compress a 4K signal. But in todayâs world 4K source material is still relatively scarce. So one of the rationales for buying the 4K enhanced products is that they produce an upscaled, apparently higher resolution 1080p picture than you get with a native 1080p projector. The fact that Sony decided to stage this competitive demo is an intriguing gauntlet thrown down. If your primary objective in buying a 4K machine is to get sharper, cleaner resolution 1080p, the Sony HW65ES is a noteworthy alternative that may save you a lot of money.

After the initial introduction of Texas Instrumentsâ new 4K DLP chip at CEDIA, we were anxious to see how the product plans are coming along with TIâs partners. The only vendor to show a prototype of a new 4K model at CES was Optoma, but this product is in its early development stages. Other vendors are working on their own 4K products but were not ready to show anything. Reading between the lines, the initial forecast for production products to be ready for Infocomm in June appears to have been inflated with a bit of wishful thinking. We will be surprised if we see anything ready for prime time prior to the next CEDIA show in Dallas, September 14-17.

One more extremely curious release -- the worldâs smallest movie theater appeared in the form of the Avegant GLYPH, a combination of audio headphones and DLP based 1280x720 resolution video, battery powered for up to 4 hours of video viewing. This is NOT a prototype. The GLYPH is currently selling for $699 (and you can get it for $599 from Avegant if you snap one up in the next few days by January 15). This concept is cool and the product warrants a review as soon as we can snag a sample (see pics below). 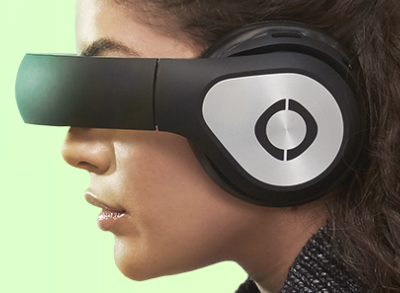