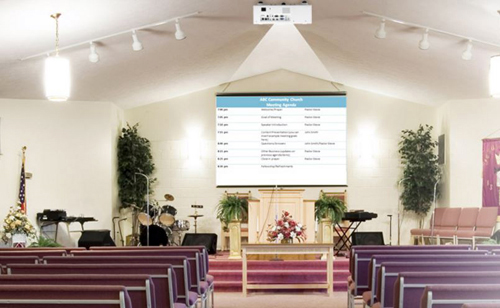 What the Ricoh PJ WUL5670 gives you

Physical attributes. With the projector on a table and viewed from behind, all but two connectors are in a slightly recessed area that spans roughly the left two thirds of the top half of the back panel. The power connector is below the recessed area near the left side of the back, with the Kensington lock slot just to the right of it. The security bar is on the bottom of the unit, near the right side as viewed from behind, and a little closer to the front than the back.

The hidden HDMI port and USB A port for powering a dongle, along with the thumbwheel controls for vertical and horizontal lens shift, are behind a small push-to-release door on the front of the projector, just to the right of the lens as viewed from the front. Intake vents cover most of the left side as viewed from the front, with the exhaust vents covering most of the right side.

Lab Tests: What the Meters Say

Low Lamp Mode. Eco lamp mode is about 71% as bright as Normal mode, which is still bright enough for many large rooms.

Presentation Optimized Lumens. The WUL5670 offers vibrant color for business graphics even in its brightest mode with default settings, making its brightest mode its Presentation-optimized mode as well at 5,006 ANSI lumens. Bright mode has a slight green bias, but far less than is typical for the brightest mode in most projectors and little enough to be a non-issue for graphics and many photos. For presentations that rely heavily on photos or video clips, however, Standard mode with default settings gives the best compromise between brightness and realistic-looking color, at 4,149 ANSI lumens.

Zoom Lens Effect on Brightness. The 1.8x zoom lens curtails light by about 32%, dropping the brightness to 68% of the level with the full telephoto setting, for 3,111 ANSI lumens in Bright mode.

Brightness Uniformity. Â The 83% brightness uniformity is just low enough to see in a solid white image, with the left and right sides just a touch cooler than the center and a broad central area near the bottom a little hotter. However, the difference is impossible to see with any text, graphics, of photo that breaks up the field of view.

Input Lag. The input lag in all preset modes was 82 ms.

Setting up the Ricoh PJ WUL5670

Throw distance. The 1.8x zoom lens offers plenty of flexibility for throw distance. For a 150" diagonal 16:10 image, for example, the range is 12.75 to 22.5 feet. The Ricoh WUL5670 Projection Calculator will give you the throw-distance range for the image size you want.

Offset and lens Shift. The range for vertical lens offset with the modest vertical lens shift is designed to work nicely whether the projector is on a table or cart, or upside down in a ceiling mount.

If you need to tilt or swivel the unit to move the image father than the lens shift can accommodate, you can adjust both horizontal and vertical keystone by up to +/- 30 degrees. Alternatively, you can use four-corner correction, which is also helpful for basic stacking setup.

The Ricoh WUL5670 is an aggressively priced bargain. At just $4,365 street, it is the least expensive model in today's market that pairs a 1920x1200 DLP chip with a laser-phosphor wheel light source. It is also the least expensive laser-based projector with that resolution and a 1.8x zoom lens, regardless of imaging technology.

Measured at roughly 5000 ANSI lumens, the WUL5670 is easily bright enough for up to a 200" 16:10 diagonal image with a 1.0 gain screen in moderate ambient light. Even with its 3500-lumen Video Optimized setting, it is suitable for watching film and video in, say, a museum display, in 16:9 format in sizes up to 160" diagonal with moderate ambient light. After several hours of viewing we found rainbow artifacts to be rare and non-problematic.

For a 5000-lumen projector, the WUL5670 is easy to set up thanks in part to its light 25 lb. weight, which makes it one of the lighter laser-based models in its class and one of the easier ones to handle. In addition, the 1.8x zoom lens--with its throw ratio of 1.2 to 2.13--plus the vertical and horizontal lens shift add flexibility for setup. Just keep in mind that the zoom curtails light output by 32% at the extreme telephoto end, so plan to install it using the wider end of the zoom for maximum brightness.

The laser-based design makes the WUL5670 suitable for 24/7, maintenance-free operation for the full 20,000-hour lifetime for the light-engine. For conference rooms and classrooms, this is a welcome convenience. For displays or signs in locations ranging from retail use to museums, it can be critical.

Also important for more creative installations are the WUL5670's support for mounting at any pitch over 360 degrees and its four-corner adjustment, which will let you correct geometric distortions for uneven or angled walls as well as match images for basic stacking to double the image brightness.

Adding still more to the WUL5670's value is one of the better warranties in the industry, at 3-years/20,000 hours for the entire unit together with advanced exchange for quick replacement.

With its combination of low price, high resolution, high brightness, ease and flexibility of setup, and better-than-average warranty, the RICOH PJ WUL5670 is a solid value. For a wide variety of uses--from retail signs and museum displays to conference rooms, classrooms, and small auditoriums--it will be exactly the right choice.