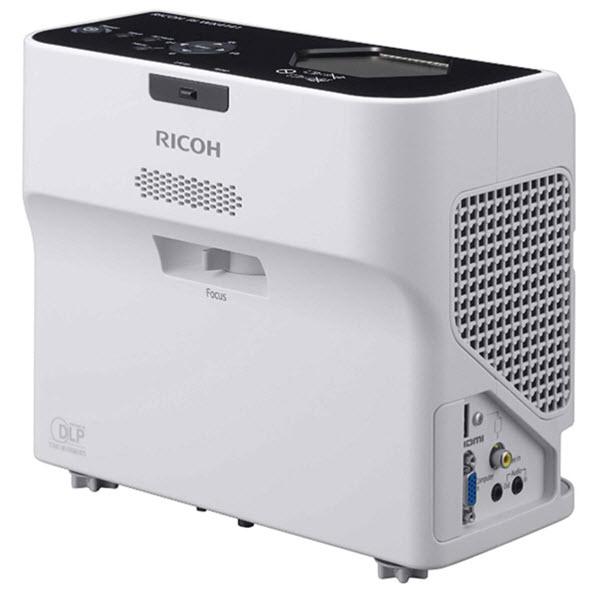 Most ultra short throw interactive projectors are designed primarily for permanent installation in a wall mount above the screen. The Ricoh PJ WX4141Ni can be installed that way too. But at 6.6 pounds, you can carry it with you, and Ricoh even ships it with a soft carrying case. That makes it a particularly attractive choice if you need to give interactive presentations on the go.

If the portability doesn't interest you, the collaboration feature might. Use the menu options to connect the WX4141Ni to another Ricoh interactive projector or whiteboard on your network, and you can see the same images on both, including any notations you add with either device. If you need to collaborate between different floors in a building or different buildings altogether, this can also make the WX4141Ni an intriguing choice, particularly since very few interactive projectors offer a comparable collaborative feature.

Underlying these features is an otherwise capable, but fairly standard, ultra short throw, interactive projector. It's built around a 1280x800 DLP chip, it uses TI's interactive technology, and it will give you a big image in a tight space. Even if you don't need the portability or collaboration features, it's a more than reasonable choice at $2,040 street. Near-excellent data image quality. The WX4141Ni did a good, but not excellent, job handling color in data images, with saturated, eye-catching color in all predefined modes. However red and blue were a little dark in the brightest mode, as is typical for DLP projectors with large differences between white brightness and color brightness levels. Color balance was excellent, with suitably neutral grays at all levels from white to black in all predefined modes.

It also helps that images designed to bring out pixel jitter and dynamic moire were rock solid in my tests. A minor shortcoming is that every time I turned the projector on or switched image sources away from and back to VGA, I had to manually give the auto-sync command to eliminate jitter and moire. But once I re-synced, the image with analog (VGA) input was as steady as with digital (HDMI) input. As with all but a handful of DLP projectors, I saw some rainbow artifacts (flashes of red, green, and blue) but they showed primarily on images designed to bring them out, and not often enough to be bothersome.

Video quality suitable for short sessions. Rainbow artifacts showed more often with video than with static data images, but infrequently enough that even those who see them easily should find them tolerable for clips that last only a few minutes. For longer sessions, however, the artifacts are likely to be annoying. Video was otherwise watchable but unimpressive, mostly because colors were a little dark, bordering on murky. Even so, colors were within the realm of acceptable. In addition, the projector did a good job with shadow detail, and it didn't show any posterization in scenes that tend to cause that problem.

3D Quality. The WX4141Ni supports HDMI 1.4a, which lets it show 3D from a Blu-ray player or other video device. In my tests, it worked with both 120Hz and 144Hz DLP-Link glasses for games and with 144Hz glasses only for Blu-ray 3D. I didn't see any crosstalk and saw only a hint of 3D-related motion artifacts. However, I saw a distinct flicker with some scenes. How easily you see flicker depends on your individual level of persistence of vision, so you may not see the problem.

The WX4141Ni shares most of its interactive features with every other projector that uses TI's interactive technology. Most notably, you don't need to calibrate the pen to the projector, and you can simply point the pen at the screen to interact without touching it. However, the farther you are from the screen, the harder it is to control the mouse or add notations. There's also the expected slight lag between moving the pen and seeing the result on screen. One nice touch is that the fan is whisper-quiet, so it won't be bothersome even if you're standing next to projector.

I didn't have multiple projectors for my tests, but according to Ricoh, the WX4141Ni can connect with up to three other Ricoh interactive projectors or whiteboards on the same LAN or WAN to share an image. You can make notations with any of the devices, and the notes will show up on all of them. Connect the projectors through a VPN, and you can collaborate easily with anyone, no matter where they are. Only a few interactive projectors offer this sort of collaboration feature, which makes the WX4141Ni a strong contender for anyone who can make good use of it.

Good connectivity. The WX4141NI offers fewer connectors than models meant primarily for permanent installation, but it includes all the most important choices.

1 VGA IN (for RGB or component)
1 HDMI
1 RCA composite
1 USB A (for reading files from a USB key)
1 LAN (for image and audio, for connecting with other Ricoh interactive projectors and whiteboards, and for controlling the projector over the network)
1 Stereo mini plug IN
1 Stereo mini plug OUT
1 mini USB service port
Integrated Wi-Fi

The WX4141Ni looks like nothing so much as an oversize lunch box without a handle. Put it on a table top, and it's much taller than it is deep, with the mirror-based lensing system on top. It projects the image mostly up and a little forward, throwing an 80" diagonal image in my tests from a touch less than 10", with the bottom of the image a little less than 6"--or about 14% of the image height--above the top of the projector.

Ricoh recommends a maximum 80" diagonal image. When I tried going much larger, the top edge was noticeably bowed. As with most ultra-short throw projectors, getting the image geometry and focus right can be tricky, because you're too close to screen to easily see the effect when you adjust the manual focus, the height of the screw-on feet, or the projector's position. If possible, you'll want someone standing where they can see the whole screen at once to help you through the process.

Setting up the interactive feature is easy. However, because the projector communicates wirelessly with the PC for interactive control, rather than through a USB cable, you will definitely need to read the instructions to find out how to set it up. The one unusual step is that you have to register the supplied USB key with the projector so the two can communicate. Once it's registered, you can use the interactive mode by installing the interactive software on any PC and plugging the USB key into that PC.

Collaboration features. You can connect up to four Ricoh interactive devices over a network, interact with each, and see the same image on all four.

With interactivity on, you're locked into a single predefined mode. With the lamp set to Standard, I measured it at 1686 lumens, which is bright enough for an 80" image to stand up to the ambient light in most classrooms or conference rooms.

As with most DLP projectors, color brightness is lower than white brightness, which is likely responsible for the color quality issues I saw with both data and video images.

Low volume. The 2-watt mono speaker is barely loud enough for a small room. If you need sound, plan on connecting an external sound system to the audio output.

Rainbow artifacts. As already mentioned, rainbow artifacts show up often enough with video that anyone who sees them easily will likely find them annoying for long sessions.

Limited image size. The lensing system allows a maximum 80" image size before it begins to show geometric distortion, with a bowed top edge.

The best argument for considering the PJ-WX4141Ni is that you need one or both of the features that make it stand out: portability and the collaboration capability. Even if you don't need either, however, the projector offers a lot to like, with near-excellent quality for data images, video that's watchable for at least short sessions, and a short throw even by ultra-short throw standards. If you need a 1280x800, interactive ultra-short throw data projector that's bright enough for a small- to mid-size room, it's well worth considering. If you need the portability or collaboration features, it could easily be your best choice.

Comments (1) Post a Comment
Abhi Posted Aug 1, 2014 6:06 AM PST
An excellent projector indeed! Innovation combined with good design from Ricoh.. And at just 11cm from the wall, it is great for very small meeting rooms, and digital signage solutions in a retail environment.