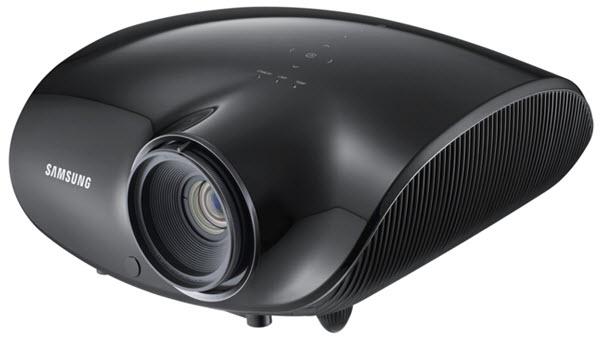 Samsung's projector division is primarily known for their line of high-end home cinema projectors. Projectors such as the SP-A900, reviewed a few weeks ago, make it clear that Samsung projectors can set a very high bar for performance. However, with the release of their new SP-A600B, they now have something to offer consumers on a budget as well. The SP-A600B is a compact 1080p projector that retails for $1795. It offers 1,000 ANSI lumens, respectable 3000:1 contrast, and accurate color in a package that's affordable. While it's not the least expensive 1080p projector on the market, it does offer decent performance for a reasonable price.

Lumen output. The SP-A600B packs a punch despite its small size. Its brightest mode, Vivid, produces 883 lumens on our test sample -- good for HD sports with the lights turned on, which makes it easier to see how much beer you have left. For cinema applications, Movie 1 mode has much-improved color when compared to Vivid, and still produces an excellent 570 lumens in high lamp mode. This is more than enough for a 120" diagonal screen in a light-controlled room, or even one with some ambient lighting, and could power a 100" diagonal screen in a room with plenty of light.

Low lamp mode extends the life of the lamp from 3,000 to 4,000 hours and cuts lumen output by 25%. This brings Movie 1 mode to 428 lumens, which is still sufficient for a 120" screen in a light-controlled theater. Vivid mode produces 662 lumens in low lamp mode, and is great for use with your child's video game system.

Contrast. In the age of projectors with 100,000:1 contrast and better, your initial reaction at a 3000:1 contrast ratio might be "Why would I buy that?" Taking one look at the Samsung SP-A600B's picture ought to satisfy your doubts. The projector has a black level that is more than sufficient for home theater, and competitive with other 1080p projectors under $2,000.

The SP-A600B is capable of displaying a good, solid picture that really looks great with high-contrast material like Blu-Ray movies. When the SP-A600B was placed next to its big brother, the SP-A900, it was surprising how good the little A600 looked. This is not to say that the two projectors are in the same league - they aren't - but that the A600 looks higher in contrast than you might assume.

Sharpness and Detail. The SP-A600B has a smooth, film-like, natural picture that is flattering to any content shown on it. Fine details in HD content, like the texture of a shirt or an actor's beard stubble, are resolved clearly and cleanly. At the same time, the image is not over-sharp, and there is no evidence of artificial edge enhancement.

Color performance. One of the SP-A600B's strong suits is accurate, natural color. Out of the box, color needed some adjustment to remove a green bias and some over-saturation. But give it a little fine-tuning and you're in business. Furthermore, black-and-white buffs will appreciate Movie 2 mode, which defaults to 5500K. This is a good approximation of the color temperature used to project black-and-white films, and produces a warmer, more inviting tone when watching these movies.

Quiet operation. The SP-A600B produces almost no fan noise during operation. If you are planning to use the projector in a coffee table mount, this will come in handy - the projector is so quiet that it will not cause any distraction to anyone, even if they're seated right next to it.

Connectivity. The SP-A600B has a spartan, uncluttered connection panel that still includes all of the connections commonly used in home theater. Featured are two HDMI 1.3 ports, a set of YPbPr component inputs, a VGA port, composite and s-video connections, a 12V trigger, and a 1/8" RS-232C connection. The 1/8" RS-232 is something not often found on projectors -- but RS-232 is a standard, not a connector, and it should be interoperable with all of your other RS-232 compliant equipment.

Price. The SP-A600B falls into an odd category. Pricewise, it is sandwiched between $999 1080p projectors from makers like Optoma and Vivitek and $2000-$2500 LCD projectors from Sanyo and Panasonic. The former beat the SP-A600B in price, and will appeal to budget-conscious consumers. The latter beat it in features and performance, and will attract more serious home theater aficionados. There are not many projectors that fall in this in-between category, save the new Epson Home Cinema 8100 or the as-yet-unreleased Mitsubishi HC3800, both of which have higher contrast than the SP-A600B.

Remote control. The SP-A600B's remote is a small affair which fits in the palm of your hand. It is roughly rectangular, but rounded on the edges, and in the dark it is easy to accidentally grab it upside-down. It has basic controls, such as direct access to the different inputs and a way to get in to the projector's menu, but that's about it. There is no backlight, so reading the remote in the dark can be difficult until you've learned the layout.

Image noise. The SP-A600B has a noticeable degree of image noise, which can be distracting on occasion. Image noise tends to manifest in areas of mid-tones, such as solid areas of the same color. Some people are not bothered by this artifact, but others cannot get past its appearance. The projector does have a noise reduction circuit, which removes a good portion of the image noise, but it does not remove it completely. It also reduces image sharpness slightly, so it is up to you to decide whether you'd like the picture more with the filter on or off.

Placement flexibility. The SP-A600B has a 1.3:1 manual zoom lens with a fixed throw angle offset of 10%. This gives you a small amount of leeway for installation - if you accidentally place the projector too close to or far from the screen, you won't have to take the projector down and re-mount it. The throw angle offset is fixed at 10% of the image height - meaning that for a 100" diagonal image, the bottom edge of the picture will appear 4.9" above the centerline of the lens. While features like an extended zoom range or some form of lens shift are always welcome, they are rarely seen on this class of DLP projector, and thus it is no surprise that they are absent from the SP-A600B.

The amount of activity in the budget 1080p market is encouraging, but it does cause consumers to wonder "which one is best?" We put the Samsung SP-A600B head-to-head with its less-expensive DLP competition, the Optoma HD20. Both are DLP 1080p projectors with short zoom lenses and relatively low contrast ratios, but the similarities end there.

Brightness. The Optoma HD20's 633 lumens in Cinema mode gives it a slight edge over the 570 lumens of the SP-A600B in Movie mode. Low lamp mode shows a similar differential, at 505 versus 428 lumens. With both projectors in their brightest modes, the HD20 measures 954 lumens to the SP-A600B's 883. What this actually means is that the HD20 appears slightly brighter than the SP-A600B, but not enough that one would notice if the projectors were not side by side.

Contrast. In side by side testing, the HD20 has a bigger dynamic range. In scenes with both very bright and very dark content, the HD20's image was more three-dimensional than the SP-A600B. However, the SP-A600B had a deeper black level, and therefore performed better in dark scenes. Black level on the HD20 was high in comparison, almost a dark gray. In a light-controlled room, the SP-A600B would be the better performer, but in a room with ambient light, the HD20 is the winner.

Audible noise. The SP-A600B is larger than the HD20. This actually makes the SP-A600B much quieter during operation than the HD20, which is easily audible even when placed several feet away. Meanwhile, we could sit quite close to the SP-A600B without being disturbed by fan noise.

The Epson PowerLite Home Cinema 8100 is Epson's latest addition to their line of 1080p home theater projectors. The two projectors are as different as can be; one is an LCD projector with extensive zoom and lens shift, while the other is a DLP projector with a 1.3:1 zoom and a fixed throw angle. However, their retail prices are within $200 of one another, though actual street price may vary somewhat.

Image clarity. The major difference between these two projectors, the one thing you will notice before anything else, is the difference in clarity and three-dimensionality. The Home Cinema 8100 has a clearer picture which exhibits less digital noise and looks far more three-dimensional than does the SP-A600B. When placed side-by-side, image noise on the SP-A600B is obvious, and it appears flatter in comparison.

Color. After a little bit of tweaking, the SP-A600B has very good, natural, life-like color, though it was oversaturated and slightly green before adjustment. The Home Cinema 8100, on the other hand, has a well-balanced picture without any noticeable bias, which makes it a better choice for the consumer who wants to "plug and play."

In terms of other features which impact usability, the Home Cinema 8100 is the clear winner. It has a 2.1:1 manual zoom lens to the SP-A600B's 1.3:1, highly flexible vertical and horizontal lens shift versus the SP-A600B's fixed throw angle, and a large backlit remote against the SP-A600B's miniature one. It is easier to install and use, and picture quality is excellent.

The Samsung SP-A600B is a projector that produces a good image for not a lot of money. It has a bright cinema mode and acceptable black level for a product of this class. However, competition from lower-priced 1080p projectors can make the value proposition offered by the SP-A600B seem weaker.

The Optoma HD20 offers a competitive level of performance, though perhaps not quite as refined, for almost half the cost of the SP-A600B, which could make consumers wonder what their extra money is actually paying for.

The new Epson PowerLite Home Cinema 8100 has all of the extra usability features that come standard on 1080p LCD projectors these days, and a great picture to boot.

The SP-A600B has no serious flaws, and indeed it is a very well-put-together product. However, for the money, there are other options available.

For more detailed specifications and connections, check out our Samsung SP-A600B projector page.