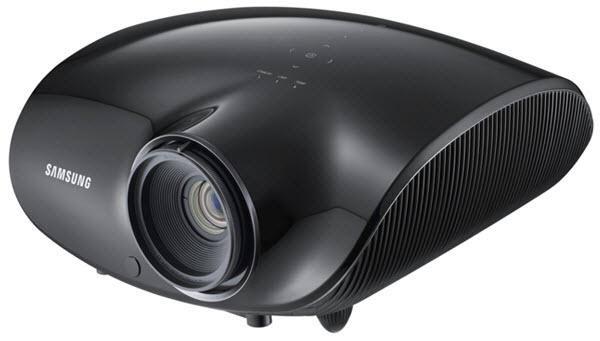 Samsung home theater projectors have become widely known as highly polished videophile products, thanks to Samsung's collaboration with video guru Joe Kane. While they have had their flaws, generally Samsung's home theater projectors have been exemplars of video quality and refinement. This year, Samsung has released the SP-A900B, a DLP 1080p projector that has few frills but produces an amazing picture. Despite its relatively unimpressive 12,000:1 contrast spec, the SP-A900B is a true videophile's projector, ideal for light-controlled home cinema.

The SP-A900B (not to be confused with Samsung's SPH-A900, which is a cell phone) is sold through a network of authorized dealers and custom installation specialists, so it cannot be purchased over the Internet. It also has a steep retail price, at $12,999. It's certainly not a projector for everyone. However, it does offer incremental improvements that, collectively, make it an attractive option for serious devotees of home cinema with the means to acquire one. Moreover, it offers one of the smoothest, most film-like, and most natural looking images to be found on any digital projector, which is something that cannot be discerned from the specifications. If you are looking for one of the finest projectors for pure light-controlled cinema currently on the market, and don't mind spending some extra money to get it, the Samsung SP-A900B is for you.

Lumen output. It is fairly common for home theater projectors to produce far fewer lumens in optimized Cinema modes than their specifications would indicate. The SP-A900B is rated at 1,000 ANSI lumens, and Cinema 1 mode measured 490 lumens on our test sample. During testing, we found that the A900 was indeed capable of 916 lumens, and you can see this for yourself by bringing up the "White" test pattern in the projector's menu.

Low lamp mode reduces the Cinema 1 mode lumen output from 490 to an even 400, which is better suited to smaller screens in light-controlled rooms. Lumen output can be lowered further if desired by switching the iris over to manual control and closing it down a few notches.

Contrast. Contrary to what the specifications might imply, the SP-A900B has excellent contrast. Although rated at only 12,000:1, it is capable of going head-to-head with some projectors rated at 60,000:1 or more. ANSI contrast on our test unit measured 484:1, and high-contrast scenes from Blu-Ray movies looked brilliant and dynamic. In Casino Royale, the stark difference between Bond's tuxedo jacket and white shirt was like night and day. This is a significant improvement over last year's A800, which suffered from relatively mediocre contrast performance.

The SP-A900B also has an auto-iris, which helps improve on/off contrast. Response time is near-instantaneous, and at no time did its movement cause any distraction. However, if you are not a fan of auto-irises, or just don't want to use it, it can be switched over to manual mode and adjusted along a scale from 0 to 100. This is especially useful if you have a near-perfect light-controlled room and find 400 lumens to be too bright for your screen size. Placement Flexibility. The SP-A900B has a 1.3:1 lens, which gives it a little bit of extra placement range compared to many DLP projectors - it can display a 100" diagonal image from 12' 6" to 16' 3", depending on the zoom setting. It also has a two image height vertical lens shift, allowing you to place the image either completely above or completely below the centerline of the lens. This flexibility allows you to mount the A900 on a low table between the seats, in a ceiling mount, or on a rear shelf without much difficulty. Relatively few DLP projectors incorporate lens shift, and even fewer have as much flexibility as the SP-A900B.

Despite this flexibility, we recommend that the projector be mounted on a rear shelf, at a height that allows the projected image to be placed half above and half below the lens centerline - i.e. as close to the neutral position as possible. The SP-A900B has the most even screen illumination and most consistent grayscale tracking/white balance when placed in this central position. Since the SP-A900B is undeniably a videophile product, it is sensible to mount the projector in such a way as to give the user the best performance possible.

Color. The SP-A900B has a professional color calibration system accessible to custom installers and ISF technicians, which is intuitive and simple to adjust with a light meter. Despite being unfamiliar with the system, we were able to adjust grayscale tracking in about ten minutes, after which we measured near-perfect 6500K across the board. What this means for you is that your installer will be able to calibrate your SP-A900B to near-perfect 6500K in a matter of minutes. However, as an end-user, you will probably never see this system. Any small flaws you find with color balance can be adjusted via a secondary system, located in the projector's options for image modes.

As far as actual color in video content, accuracy is nearly perfect, and saturation is rich and vibrant. Using Blu-Ray movies, subject matter appears life-like and color balance is realistic. Flesh tones were particularly impressive, and some difficult scenes in Casino Royale on Blu-Ray looked better than they ever have before. The SP-A900B is among the elite of digital projectors, offering the most accurate, consistent, and life-like color available.

Sharpness and Detail. All 1080p projectors are sharp by nature, but the SP-A900B is sharp even among 1080p projectors. Small, miniscule details in HD content that would normally go unnoticed have a way of popping out when watching the SP-A900B. Textures in fabrics and individual hairs are clearly visible. The SP-A900B is nearly transparent to the source material in terms of fine detail, without ever appearing to suffer from edge enhancement or a "digital" quality that can make a picture seem less film-like. The detail becomes most apparent when using an HD screen material (We used the Da-Lite JKP Affinity HD screen for this review.)

Smooth, film-like image. The greatest advantage of the SP-A900B is not found on the spec sheet, nor is it reflected in any readings or measurements taken for this review. Indeed, it is almost impossible to quantify what makes an image appear "film-like" or "natural," but the A900 has this quality in spades. This is partly because of the absence of artificial edge enhancement, an exceptionally sharp lens, outstanding color and a compelling three dimensionality in the image. It is a combination of all factors that gives the SP-A900B the elusive quality that separates a good projector from a great one, and videophiles know how important this quality can be.

Uneven color temperature. On our test unit, the edges of the screen did not measure the same color temperature as the center. When looking at a 100 IRE white screen, this was visible with the naked eye. While the center of the picture was reading 6500K, the left edge would read 6300K, while the rightmost edge would read 7100K and the top right corner would read almost 7500K. The effect was more pronounced when using the extreme ends of the lens shift range. At neutral position, the image was at 6500K in center from top to bottom. But when the lens was shifted to is maximum upward position, color temperature in the top center of the image went to 7100K while remaining at 6500K in the bottom center of the image. Thus, in order to maximize color temperature uniformity, it is best to install the projector with the lens shift in its neutral position if at all possible.

Having said this, we should hasten to add that it is pretty much impossble to notice any variances in color when viewing video or film sources. The only reason to mention it is that when one spends premium dollars for a high performance model of this type, one wants it to perform at its peak in all ways. The lens shift position at neutral is the optimal setting.

Black level. While ANSI contrast on the SP-A900B is superb, black level is not as deep as it is on several other recently released 1080p projectors with auto irises. This is only really visible in side-by-side testing, as the difference can be subtle, but the SP-A900B does not possess the extreme on/off contrast to be found on several other models. In a light-controlled theater, this would manifest as a slight shadow on the screen when projecting a 0 IRE test pattern. While not detrimental to normal use, those looking for the bleeding edge of contrast and black level performance will want to continue searching elsewhere.

Standard lamp life. The SP-A900B's lamp is only expected to last approximately 2,000 hours, while some other projectors these days have lamps which can endure for 4,000 hours or more. Now, 2,000 hours is still a long time - that's one two-hour movie per night every night for the next two years and nine months. However, those who acquire this model will most likely want to replace lamps more often than once every 2,000 hours. Lamps lose as much as 50% of their brightness over their lifespan, so changing lamps every 500 to 1,000 hours will ensure consistent, peak performance from this projector.

The latest collaborative effort between Samsung and Joe Kane is a true videophile's projector, optimized for pure home cinema use in a totally light-controlled environment. At $12,999, it is not inexpensive by any stretch of the imagination. Its contrast is solid and competitive if not leading edge, but the overall picture quality is something to behold. To the videophile with the cash who wants nothing more than the most film-like and natural image money can buy, the SP-A900B is a dream come true.

For more detailed specifications and connections, check out our Samsung SP-A900B projector page.

Comments (5) Post a Comment
Ken Whitcomb Posted Aug 23, 2009 6:09 AM PST
The replacement lamp carries a $250.00 MSRP, making it perhaps the least expensive UHP projector lamp available. This should be taken into account when considering the cost of ownership.
Robert Whitehead Posted Aug 25, 2009 6:43 PM PST
The price on the Samsung 900 has been lowered to $9999.00
Scott Anderson Posted Sep 1, 2009 9:25 AM PST
After the H710AE projector debacle, Samsung should be practically giving these things away. It sounds like a wonderful projector to view, as was the 710, but the reliability issues on that unit left me a very sour taste for purchasing another Samsung product.
Robert Whitehead Posted Oct 4, 2009 5:13 AM PST
Price on the 900 is going up to $12,999 on October 1st.
Ray Smith Posted Oct 5, 2009 5:21 PM PST
Do you have a schematic type drawing that shows the mounting holes to be used to mount it to a ceiling mount/plate? I'm trying to use it with an anamorphic lens that I don't want to buy from DVE....too expensive. If not do yo know where I can find this?