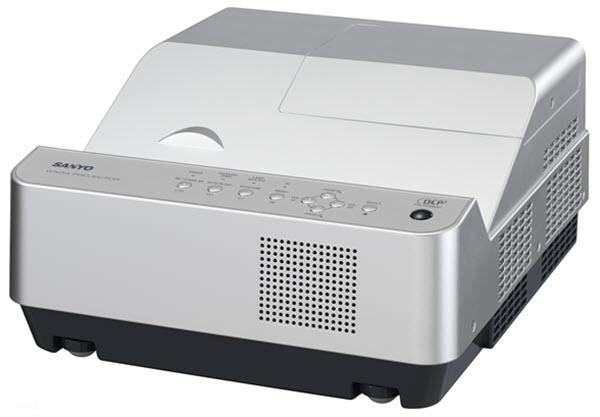 The Sanyo PDG-DWL2500 is an ultra short throw WXGA projector. It produces a large image in very little space - an 80" diagonal 16:10 image requires only 13" of clearance. With a 2500-lumen maximum light output, 3D capability, and excellent connectivity, the DWL2500 makes a great addition to any classroom or conference room. Never again will you need to worry about casting a shadow over your presentation. It is not portable and placement can be a hassle, but once installed, the DWL2500 is a solid performer. It retails for $1,995.

Image quality. The DWL2500 is a bright projector, with a brilliant data image that looks best with simple content like text documents and spreadsheets. Contrast is sufficient for use in ambient light, though shadow detail is not as well-defined as on some competing models. On our test unit, shadows were often crushed in lower illumination areas, meaning the DWL2500 is best used with bright, high-contrast content such as text documents and simple Powerpoint presentations. And while color accuracy and saturation is excellent at higher brightness, less intense colors suffer from the same crushed shadows. The DWL2500 is best paired with text, data graphics, and spreadsheet data, while photographs can look good depending on content. Using one of the less bright image modes, like Real or Cinema, can also help correct for this imbalance.

Ultra Short Throw. The DWL2500 is known as an ultra short throw projector, which is a somewhat fuzzy category. However, the generally accepted characteristics seem to include projectors that can display a moderately-sized image from throw distances of less than a foot. This makes the DWL2500 ideal for rooms where there isn't a lot of space or where a presenter must interact with their material often--classrooms come to mind immediately.

The DWL2500 will display an 80" diagonal 16:10 image at 13" throw distance from lens to screen. This is already impressive, but more so when you realize that the lens housing is situated near the back of the projector. For that 80" diagonal image, the front edge of the projector can be positioned only 1" away from the screen surface.

This also has the advantage of reducing the shadow cast by a presenter operating close to the screen. Since the DWL2500 has such an extreme throw angle, you can get very close to the screen (say, within nine inches) before you begin to cast a shadow on the projected image. In a teaching environment, this allows you to lecture from the front of the class without blocking the picture or having the bright projector lamp shine in your eyes.

The DWL2500 can display an image between 60" and 110" diagonal. When the projector is placed flush against the wall, the image diagonal is roughly 72". The smaller 60" diagonal is only possible if the screen protrudes over the projector housing by about 3". This is useful when a screen is not mounted absolutely flush with the wall--you can still project a focused, clear image. Scooting the projector back about an inch gives a diagonal of 80". The maximum size of 110" is reached from roughly 6.3".

Light output. As far as lumen readings go, the DWL2500 is exceptionally difficult to measure. Lumen measurements depend upon a series of nine meter readings and the size of the projected image. Due to the extreme throw angle of the DWL2500, we were unable to obtain a dependable reading from the projector. Laying the meter flat against the screen surface returned a reading of 800 lumens, but the picture looks much brighter than that. Tilting the meter to allow more light to hit the sensor resulted in readings far above the specification, above 2700 lumens. In this case, a subjective judgement will have to suffice: the DWL2500 is very bright indeed, and more than capable of projecting a 100" diagonal image in moderate ambient light. The projector's focus range is somewhat limited, so images above 110" diagonal are not possible in any case. In a dark room, the DWL2500 has more than enough light to go around.

One thing we can comment on is low lamp mode. It reduces lumen output by 23%, cuts audible noise, and extends the life of the lamp. On a projector this bright, there are few downsides to engaging low lamp mode.

Connectivity. The DWL2500 has an extensive array of connections available. Topping the list are HDMI and two VGA ports, one of which can double as a monitor pass-through. This is a desirable feature for classrooms because it allows the room's desktop computer to be used with the projector without disabling the teacher's monitor. Composite and s-video round out the visual connections. Next up is an RJ45 LAN port for network monitoring and connectivity, a 9-pin d-sub serial port, and a 3-pin VESA 3D sync jack. This allows the DWL2500 to work with a wide array of 3D hardware, though it is not NVIDIA certified, so users of that system may have to jump through some hoops to get the projector working properly. Audio connections include two 1/8" audio inputs, a 1/8" audio output, and an L/R RCA stereo input. With all of these connections available, one would be hard-pressed to find a signal the DWL2500 can't handle.

3D Ready. The DWL2500 uses Texas Instruments' DLP Link technology for 3D Display, allowing for the showing of stereoscopic 3D content up to 1280x720 resolution. Like all DLP 3D Ready projectors, the DWL2500 is capable of displaying 3D content transmitted in the frame-sequential format - that is, frames are transmitted left-right-left-right at 120 frames per second, giving a frame rate of 60 frames per second per eye. So the DWL2500 can be used with a computer outputting 120Hz 3D, but will probably not work with Blu-ray or broadcast 3D. This isn't so much a problem with Sanyo's projector as it is with the state of 3D technology, but it is something to consider before purchasing.

Documentation. This is not something we normally comment on, but the DWL2500 has an exceedingly well-written and comprehensive manual. It includes plenty of clear, easy to understand graphics and detailed instructions - including a how-to on using 3D content, which is absent from almost all other 3D Ready projector manuals. Sanyo deserves kudos for this addition.

Difficult placement. One of the downsides of short throw projectors is that placement is usually a chore. The projector must be placed perfectly square with the screen, down to the millimeter. The DWL2500 is even more difficult due to its ultra short throw; even the slightest alignment error can lead to strange problems with screen geometry. Getting the projector adjusted just-so is vital for achieving proper edge to edge sharpness and detail clarity, so the installer will have to take extra care to ensure that each projector is mounted precisely in the correct position. Typically, this is achieved with the use of a special mounting arm bracket which holds the projector in the proper position and secures to the wall itself. This is much easier than trying to place the projector on a table, as we found during testing; the slightest shift, the tiniest imbalance, and the rectangular image is skewed or made trapezoidal.

Focus. Related to placement is focus. The DWL2500 has a very limited focal range, in that it is only capable of displaying images between 60" and 110" diagonal. Smaller or larger images are impossible and will appear out of focus. This is part of why placement is so crucial with the DWL2500: if the image is not perfectly square, focus will not be even across the projected image. When displaying detailed information like a spreadsheet, a lack of focus in any part of the image can be detrimental to audience comprehension.

Gamma. The one flaw with the DWL2500's image is that mid-tones look dark and shadowy, causing a loss of detail in the mid- to low-end of an image's tonal range. So while bright data graphics and simple Powerpoint presentations looked vivid and life-like, photographs and especially videos seemed dim, dark, and dingy. This is not as much of a problem for most classrooms, where the focus is on bright and vibrant education material, but it can be a cause for concern in business applications where shadow detail can be important.

Maintenance. The DWL2500 is relatively high-maintenance compared to other DLP projectors. The 2500-lumen lamp is rated to last 3,000 hours in eco-mode, which is a modest lifespan these days. Replacements cost $600, which is above average. The DWL2500 also has an air filter, which is unusual on today's DLP projectors. While the benefits and downsides of air filters are debatable, the fact remains that they need to be cleaned and changed fairly often. Sanyo's filter on the DWL2500 is a long life model, rated to last between 2,000 and 4,000 hours depending on use environment. In a nice touch, the filter reminder timer can be set to 2,000, 3,000, or 4,000 hours. However, when compared to other DLP projectors with no filters, this is another piece of regular maintenance.

Sanyo's PDG-DWL2500 is great for the classroom. Its bright picture is perfect when you have a sizeable room full of students who all need to see the material. The high upward throw angle and short throw distance make instruction easy, since a teacher can stand very close to the projected image without casting a shadow. A cornucopia of connections makes it easy to attach any equipment you need, from laptop computers to Blu-ray players to the venerable low-tech VCR. The price tag of $1995 is high for a WXGA projector, and it is not designed as a multi-purpose machine; if you need a projector you can bring with you or place in many different viewing environments, this isn't the one for you. But for short-range projection of very large images, the DWL2500 is one of the finest projectors around.

For more detailed specifications and connections, check out our Sanyo PDG-DWL2500 projector page.

Comments (2) Post a Comment
oluayo israel Posted Feb 3, 2011 11:00 PM PST
very good product but the price is high considering we from a developing countries like Nigeria. I think it should be noted,
Craig Posted Mar 14, 2011 1:05 PM PST
With the short throw installation will there be any problems associated with glare if we project on an Eno board?