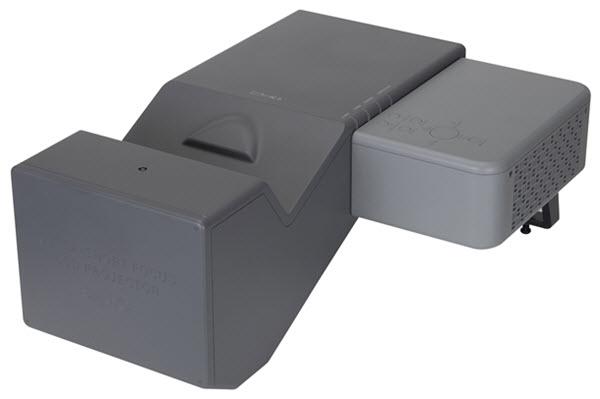 Imagine being able to get a bright, vibrant, 80" diagonal image from a projector placed only three inches from the screen. Imagine not having to place a projector on a conference table right in the middle of your audience, so they don't have that noise and heat in their faces. Imagine not having to worry about getting in the light path and casting shadows on your presentation, and never having to squint your eyes against the glare of the lamp. Well, this isn't just a dream. Sanyo has made it a reality, with the PLC-XL50.

The PLC-XL50 is touted as having the world's shortest throw distance. In point of fact, it can display an 80" diagonal 4:3 image from a mere 3" away from the screen. It is great for conference rooms, and for spaces like storefront display windows where a conventional projector will not fit. The XL50 is arguably Sanyo's most unique projector offered to date, and can simplify projector installation in almost every instance. It is available at street prices near $2900.

Super-short throw distance. The Sanyo PLC-XL50 is an ultra-short throw projector, meaning it can display very large images while only inches away from the screen. In fact, when the projector is placed flush with the screen's surface - in other words, a throw distance of zero inches - it displays a 70" diagonal 4:3 image. From three inches away, the image is nearly 80" diagonal. The largest image we were able to obtain was a massive 144" diagonal - that's 86" tall by 115" wide - which was measured at a throw distance of only nineteen inches.

High lumen output. The XL50 test sample we received delivered a whopping 2126 ANSI lumens in its brightest (Dynamic) mode, despite being rated at 2000 ANSI. We can count on our fingers the number of projectors that have exceeded their published lumen specifications. In "Real" mode, which gives excellent color performance, the XL50 measured 1701 lumens. This gives the XL50 enough lumen power that ambient light should not be an issue unless it is shining directly on the screen.

Accurate color. In "Real" mode, the XL50 did an excellent job of displaying a pleasant, well-balanced picture free of overt color bias or oversaturation. Photographs displayed on the XL50 in "Real" mode looked natural and vibrant. Other image modes such as "Dynamic" and the user-programmable modes have a greenish cast which can be taken out with proper calibration, but "Real" mode is the best out of the box choice for the display of material where color accuracy is a priority.

This sharp upward throw also allows presenters to get much closer to the screen without the discomfort of staring into the projector's lamp or the hassle of blocking important details with one's shadow. Even standing mere inches from the screen, a presenter will not cast a shadow in the projected image.

Relatively quiet. The XL50 is a powerful projector, and its 275W lamp puts out a reasonable amount of heat. Nevertheless, fan noise is low in pitch, and the XL50 is much quieter than many other 2,000 lumen XGA projectors, in part due to its larger size.

Because of the XL50's unique short throw lens, the projector is placed near the screen instead of on a conference table or a cart in the middle of the room. This keeps fan noise and heat exhaust well away from your audience, ensuring that neither of these factors will cause any distraction from your presentation.

No long cable runs. The XL50 sits up close to the screen, which is generally where one stands while making a presentation. This has the added benefit of keeping the projector and your laptop close together, eliminating the need for long cable runs. With the projector up at the front of the room, you can simply plug in and get to work.

Minimal ceiling mount placement flexibility. The XL50 has a fixed lens, meaning there is no physical zoom adjustment. While the projector can display an 80" diagonal from about 3" throw distance, this image cannot be made smaller or larger to accommodate your screen without either physically moving the projector or using the projector's slight digital zoom and losing resolution. When placed on a low table or a rolling cart, you can simply move the projector forward or back to adjust the image. However, when installing it on the ceiling, you need to place it just right in order to hit the desired screen size and location.

In addition to the lack of zoom, the XL50's extreme upward throw angle means that the projector must be mounted absolutely square with the screen. On the XL50, slight misalignments result in large, easily visible changes to the projected image's shape. If the unit is placed on a table or shelf where its position can be adjusted slightly, there is no problem. But if it is on a rolling cart, getting it positioned with exact precision could be a bit more difficult.

Not portable. The XL50 has a system of mirrors inside that creates a large image in very little space. However, this unique configuration comes at a price. The XL50 weighs in at a substantial 16.8 pounds, making it a great candidate for use on a rolling cart, in a ceiling mount, or on a fixed shelf or table. If you simply need to get the XL50 from point A to point B once in a while it is certainly possible, but it is not a projector for traveling presenters.

The XL50 is unlike any projector we've yet seen. We cannot do the usual comparison with similar models which have come before. In addition to conference rooms and classrooms, where the XL50 already has many benefits over a standard projector, there are several applications to which the XL50 is particularly well-suited. Many of these applications were previously thought to be places projectors could never go.

Digital signage. Nowadays, one often sees posters and flyers replaced with flatscreen televisions, used for dynamic announcements and the like. The XL50 can perform this same function, and it leaves the wall with a clean, uncluttered look. It can also put content at eye level while keeping the projector's controls out of reach and effectively tamper-proof, which can be important in public spaces.

Videogames. The XL50 makes a great pair with the Nintendo Wii, which displays most of its content in good old 4:3 standard definition. For those not familiar with the system, participants wave the motion-sensitive remote at the screen to perform a variety of tasks - many of which are better performed standing. As such, a short-throw projector like the XL50 allows the participants to get as close to the screen as they need to without blocking the picture.

The Sanyo PLC-XL50 is a projector with a purpose, designed to do one thing and do it well - project large images in little throw distance. It succeeds in this venture spectacularly. At $2900 street, the XL50 is a reasonably priced alternative to large flatscreens, and requires much less setup and clutter. For almost any presentation environment, the XL50 offers an escape from heat exhaust near the audience, long cable runs, staring into the projector's lamp, and blocking the picture with your shadow. With excellent lumen output and solid color performance, the XL50 is suited to almost any room.

For more detailed specifications and connections, check out our Sanyo PLC-XL50 projector page.