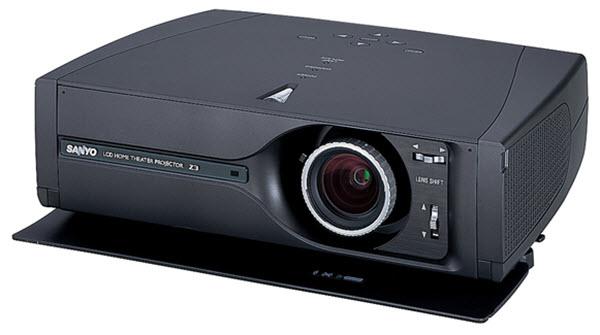 Without question the most popular resolution format for home theater projectors on the market today is 1280x720. Almost all of the higher end DLP projectors use this format, and the LCD makers have made aggressive moves in the lower end market with 1280x720 resolution machines as well. Sanyo has been one of the leading competitors in low cost, high resolution home theater, first with the release of the PLV-Z1, then with last year's improved PLV-Z2. Now Sanyo has just released the PLV-Z3, which carries on the tradition of delivering continued improvements built around the 1280x720 engine. The Z3 incorporates a number of refinements over the Z2, including better contrast, deeper black levels, lower fan noise, a wider array of inputs, and a unique feature than enables users to clear dust particles from the LCD panels.

Brightness. There are a variety of precalibrated video settings as well as four user programmable settings. Depending upon how it is calibrated the Z3 will output anywhere from 260 to 640 ANSI lumens. For optimum video quality, brightness will typically measure no more than about 300 to 400 lumens. As with all projectors rated at 1000 ANSI lumens or less, it is intended to be used in a dark viewing space for best results.

Similarly, the horizontal lens shift lets you move the image from side to side to a maximum of 50% of the picture width. That lets you position the entire projected image either to the right or to the left of the centerline of the lens.

Two notes are warranted. First, you cannot achieve both extremes of horizontal and vertical shift simultaneously. As you move the lens toward the ends of the vertical shift range your ability to move sideways is increasingly restricted. Second, you should avoid the extreme ends of the lens shift range whenever possible since the lens is not as optically efficient in those positions.

Six video inputs. The Z3 offers the new HDMI port, which means it is compatible with DVI (HDCP) outputs from DVD players or set top boxes that offer DVI output. Furthermore a PC input (15-pin VGA), and a second 3-RCA analog component video have been added to the basic configuration offered on the earlier Z2 which included just one component input. As with the Z2, there is one S-video and one composite video input, both of which should be used only for VCRs, video game boxes, laser disc players, and any sources for which component outputs are not available.

User maintenance of LCD panels. One problem that can occur on any projector that does not have a sealed light engine is that dust particles can settle on the LCD panels. When a dust particle lands on and sticks to an LCD panel, it will produce a small, fuzzy spot on the projected image. When owners of projectors have a dusty environment and/or do not perform regular filter cleaning maintenance, they may need to send their units in for cleaning periodically to eliminate dust.

Sanyo has come up with a novel solution to this problem on the Z3. There are three tiny holes in the bottom of the casework that remain sealed in normal operation. However should a dust particle settle on an LCD panel, the user may remove the seals and insert a hand-pump blower (included with the product) that will dislodge any dust. After this operation, the seals are easily replaced and you are back in business. Since there is no dust on our test unit, we cannot actually verify that this works. But it looks like a great solution to a problem that has long been a nuisance for some projector owners.

Color temperature. The Z3 has five preprogrammed user selectable color temperature settings, labeled High, Mid, Low1, Low2, and Low3, in descending order of kelvins. The Mid setting is the default, and closest to the ideal 6500 kelvins required for optimum display of NTSC color film and video. We are delighted to see that home theater projectors are beginning to include warmer color temperature settings as standard since they are great for those of us into classic black and white films. They deliver a warmer cast to the B/W film, much like the sepia toning of a B/W photograph.

You have four options for the display of 4:3 programming. First, in Normal mode you may center it in the middle of the 16:9 screen with black pillars on each side. This mode maintains the correct original aspect ratio of the material. Second, in Normal Through mode you can display the native 4:3 image without scaling in the middle of the screen. In this mode the image is much smaller, occupying only one-third of your actual 16:9 screen area. Hovever in this reduced size mode the scaling is eliminated so the image is of much better quality. Third, in Natural Wide 1 mode the 4:3 image expands horizontally on the sides to fill the 16:9 screen while (in theory) maintaining correct aspect ratio in the center of the image. (This did not function properly in our test. The image was evenly stretched horizontally with no evidence of an attempt to maintain proper aspect ratio in the middle of the screen.) Fourth, in zoom mode you can simply expand the 4:3 image to where the sides fit the 16:9 screen and the top and bottom portions of the image are lost. Of these options the only realistic choice for most viewers will be to center the 4:3 image on the 16:9 screen with black columns on each side. However it is easy to toggle sequentially through each of the aspect ratio settings via a button on the remote, and quickly select the one that most appeals to you.

Sanyo has incorporated a lot of improvements into the Z3. Scaling and onboard deinterlacing have been improved such that overall image stability and sharpness are better on the Z3 than they were on the Z2. Owners of the Z3 will never want to bother with an external video processor like the DVDO iScan HD since the onboard electronics are already fully adequate to the task. DVDs are scaled as cleanly as we've ever seen on any product in this class, and those with particularly good transfers look almost high def.

There was hardly any pixelation, and no screendoor effect on the Z2, and the Z3 is equal or slightly better in this regard. The visibility of pixel structure in credits and subtitles disappears at a viewing distance of 1.3 times the screen width-closer than just about anyone would ever want to view it.

Contrast and black levels are markedly improved over the Z2, lending the image more punch and better color saturation.

We see no hint of any vertical banding on our test unit. However the Z3 has an LCD panel adjustment mechanism available through the menu to tweak away the artifact if it should show up.

In terms of overall brightness, the Z3 is the same as the Z2. Once calibrated for best video, neither unit is designed for high light output. We suggested the use of a 96" to 100" screen for the Z2. Due to the improvement in contrast on the Z3 you can go somewhat larger and still get a very satisfying, high contrast image. However a dark viewing environment is mandatory for best results due to the limitations on lumen output. As is true with all projectors rated 1000 lumens or less, those seeking to achieve the best image quality will resist the temptation to go with too large a screen in order to avoid dilution of contrast and color saturation. The trade-off begins to cost you something in image quality once you go beyond the range of 110" to perhaps 120" diagonal.

The ability for the user to eliminate dust from the LCD panels is a novel concept and significant competitive advantage. Those who may have had trouble with dust on previous projectors are likely to credit the Z3 with many extra bonus points for this feature.

In most preferred operating modes for best video, fan noise is almost nonexistent on the Z3. Though the Z2 is not loud by any means, the Z3 is without a doubt a further step reduced in fan noise. This is a good thing, because no matter how you set it up, if you are viewing from a distance of 1.5 to 1.7 times the screen width, the projector will be in close proximity to the seating area.

With a throw distance of 10 to 13 feet to achieve a 100" diagonal image, most users will need to opt for either coffee table mounting or ceiling mounting. Rear wall shelf mounting will work in some cases as well, but the rooms that will accommodate this are relatively few as a percentage of the total.

For example, if you wish to set up a 100" screen and have a viewing distance of 1.5 times the screen width, you will be sitting about eleven feet from the screen. The projector (measured from the front of the lens) must be at least 10 feet and no more than 13 feet from the screen-in other words, right in your seating area. Therefore, your options are (a) set the projector on a table between the viewing chairs, (b) put it on an independent stand immediately behind the seating area, (c) ceiling mount it above the seating area, or if the room is just the right size, (d) put it on a shelf on a rear wall immediately behind the seating area.

Of these options, table mounting or placing it on an independent stand immediately behind the seats will be the easiest and most practical solutions for many users. The reason is that ceiling mounting will cost an extra $200 for the mount, and perhaps another $200 extra for long run video cables, plus some drywall work if you want to bother running cables through the ceiling.

The purpose of talking through this scenario is to get you to set aside for the moment the cost and image quality issues, and think about the practical logistics of setting up the Z3 in your intended viewing room. Since most projectors have relatively short zoom ranges, and most have throw distance ranges similar to those of the Z3, there is nothing particularly unusual about the Z3 with regard to installation options. But it is a practical issue that many folks can overlook while concentrating on lumen and contrast ratings, and focusing on the rave reviews proclaiming its amazing image quality.

When it comes to image quality, the Z3 has it in spades. This projector is a lot of fun to watch. DVD material is razor sharp and as cleanly scaled as it gets. Even standard definition broadcast television is clearer and more watchable that we would have anticipated. As you might imagine based upon its native 1280x720 resolution, it does a beautiful job with both 1080i and 720p HDTV. It is capable of delivering a high contrast, rich, detailed image that will be breathtaking to your friends and neighbors, especially after they hear how little you paid for it.

The price is worthy of note. Not only has Sanyo improved contrast, black levels, onboard video processing, and fan noise compared to the Z2, but they've added the ability to blow out the dust. On top of all that they've marked the retail price down $500, to $2,495. Overall, this is a combination of improvements in price/performance that is easy to get enthused about.

We are watching a rebroadcast of the Athens Olympic Games in HD this afternoon, and Cirque du Soleil is on tonight, both on Bravo HD. It is a good time to have a projector like the Sanyo PLV-Z3 on hand, and we are certainly pleased to put it on our list of Highly Recommended Home Theater Projectors.

For more detailed specifications and connections, check out our Sanyo PLV-Z3 projector page.