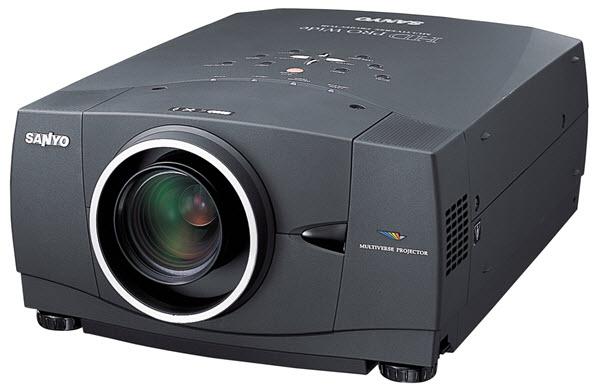 Sanyo does something that few projector manufacturers do. In addition to producing models like the PLV-Z4 that are made for home theater, they build commercial-edition 16:9 widescreen projectors that pump out a LOT more light than the typical widescreen projector designed for home theater. This tradition began in earnest with the PLV-70, rated at 2200 ANSI lumens. That was followed by the industrial strength PLV-WF10 which throws a very real, no-nonsense 4000 ANSI lumens. The latest Sanyo model to follow in this tradition of big, bright widescreens is the PLV-80. This unique 3000-lumen projector is not designed to be a "bright home theater projector." Instead it is intended for larger venue applications. And for those who need its particular set of features and performance, nothing else will do.

Zoom lens and throw distance: Variable based on lens selection.

The most obvious and unique feature of the PLV-80 is its high 3000 ANSI lumen brightness rating, which is rare in the world of widescreen projectors. Like the larger PLV-WF10, the video optimized output measures very close to the official specification. With the precalibrated "cinema" settings and the lamp at full power, our test unit produced 2460 ANSI lumens. After dropping the lamp power to eco-mode, brightness was reduced 20% to 1985 lumens. So the PLV-80 is roughly five times brighter than the typical video-optimized home theater projector. It is clearly intended for large venue use-large conference rooms, small auditoriums, sports bars, casino sports books, and other commercial environments where large scale video is required.

As one might expect, contrast is reduced in order to achieve this exceptional lumen output. Though the picture is brilliant, the black levels are not as deep as they are on today's home theater projectors, particularly with standard definition video (TV, DVD). This makes the PLV-80 well-suited to ambient light situations. When room lights are on, black levels get hammered no matter what projector you use. With lights on, a "5000:1 contrast" home theater projector rapidly drops to 50:1 or less, and the picture looks dull and dim compared to its dynamic snap in a dark room. The PLV-80's high lumen output is intended to compensate for this. What you end up with is a picture that lacks the rich blacks, but has much more of a commanding presence on the screen than a traditional home theater unit. You can light up a 120" diagonal screen with normal room lights on and still remain fully immersed in the image.

Alternatively, with some degree of light control, the PLV-80's lumen output can be used to produce much larger images than most video projectors. A 200" diagonal screen is four times the surface area of a 100" screen, and home theater projectors rapidly lose their punch when they are pushed beyond the 100" to 120" diagonal range. For those who have application requirements for very large screen video, the PLV-80 or the larger PLV-WF10 become more satisfying and cost-effective alternatives.

As with all projectors, the dynamic range of the image will depend in part on the signal. With computer graphics, digital photography, and HDTV, black levels on the PLV-80 are much superior to those achieved with standard definition video. Its image with HDTV is a thing of beauty, rivaling the quality of a home theater picture. While black levels do not quite match those of the home theater models, they are deep and rich enough to produce a thoroughly satisfying high-contrast picture with excellent color saturation. With graphics and HDTV, the PLV-80 leaves you with no impression that the blacks lack sufficient depth.

Brightness uniformity measured a good 82% with luminance fading somewhat to the lower right corner. This is visible only on a uniform gray field test pattern, and only when you look for it. In normal video operation there is no detectable unevenness in screen illumination. We found no hint of vertical banding in gray field test patterns.

The PLV-80 is not video optimized out of the box. It helps to have a calibration disc handy in order to get the picture tuned to its best potential. Factory defaults for component video in cinema mode on our test unit had sharpness significantly overdriven (to our taste at any rate)--the sharpness adjustment scale is 0 to 30, with a default at 15. We moved it down to 4 to gain a smoother, more satisfying image. Brightness was reduced a few notches from the default of 32 down to 28, and color was increased from 32 to 40. Those are not quoted as recommended adjustments for all PLV-80s, but they illustrate the type of basic adjustments we were making to achieve the best picture quality on our particular test unit.

The PLV-80 that we tested had the standard 1.3x powered zoom lens that can throw a 150" diagonal image from a distance of between 19.4 to 25 feet. However, this is just one of the five lenses that can be ordered with the unit. Optionally you can select a shorter fixed, or shorter zoom lens, or if you want more throw distance there is a long zoom and ultra long zoom alternative. The PLV-80 has powered vertical lens shift, but the range will vary depending on the lens you select. There are too many variables to discuss here, so consult your Sanyo dealer regarding lens options for your particular installation needs.

Since this is a bright projector intended for use in large venues, the fan noise is greater than it is on smaller units intended for home use. Considering the light output and the size of venue the unit is intended for, the fan noise is low in eco-mode and moderate in full power mode. It is low in pitch, so even in full power mode it is not objectionable in a larger room. However, if one were to use the PLV-80 in a large scale home theater, it would be good to take steps to isolate the unit, and thus the audible noise, from the audience.

A related consideration is the heat. This projector generates more light than most projectors in part by using a 300- lamp. So it must not be deployed in a confined space without adequate planning for heat dissipation.

If you are unfamiliar with Sanyo menus, the first encounter with the menu on the PLV-80 will be confusing. It is entirely icon driven and requires a bit of experimentation to figure it out. (As a last resort, you can always consult the manual). However, once you become familiar with it, it is easy to use. The icon format has a significant benefit--the relativly small icons are laid against the edges of the picture in the top left corner, so the menu allows you to see almost the entire picture as you make adjustments. There are certainly menu layouts that are more intuitive than this one, but they often consume so much of the picture area that you cannot see the effect of your adjustments.

The Sanyo PLV-80 is a rarity in the world of widescreen data/video projection systems. Most widescreen projectors are built for home theater and do not have the horsepower to be used in more demanding large screen applications. The PLV-80 is designed to deliver a big, bright, engaging image, and it does that in spades. It is ideal for video presentation use.

Many home theater enthusiasts are looking for much brighter widescreen projectors so they can watch movies in their family room with the lights on. It is understandable that the 3000 ANSI lumen rating on the PLV-80 would sound enticing to such users. However, in most cases the PLV-80 will be too big and too muscular for home use--too much light, too much heat, and in a small space, too much fan noise. Except in the most unusual of circumstances, the PLV-80 is not a viable home theater solution.

Having said that, we are enthused by the overall performance of the PLV-80, and have no reservations about giving it a solid recommendation for deployment in the larger venues that it was designed for.

For more detailed specifications and connections, check out our Sanyo PLV-80 projector page.