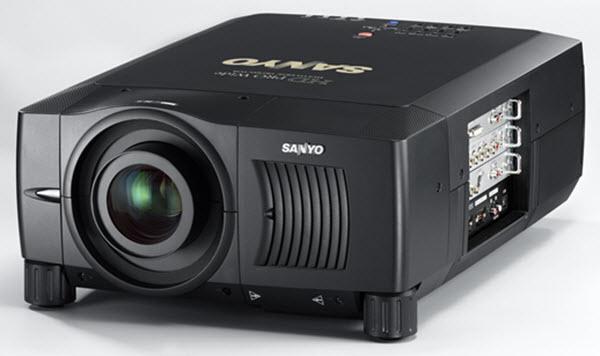 Sanyo builds a wider variety of LCD projectors than any other manufacturer in the business. With about 30 models in current production, Sanyo targets unique market niches like no other vendor. And the newly released PLV-WF10 is a prime example. With the WF10, Sanyo has combined high resolution widescreen LCD panels with a two-lamp 4000 ANSI lumen light engine to produce a large venue video projector unlike anything else on the market. Though the WF10 could be deployed in an oversized residential home theater, the ideal use is in any larger venue where high quality video and HDTV is required. The WF10 is a quintessential sports bar projector, and college-level film studies departments would want one in every classroom.

Lenses and throw distance. There is no standard lens with the WF10; all lenses are optional at extra cost. Most are between $1150 and $5,000, and one extreme lens is $16,395. Depending upon the lens selected, a 100" diagonal image can be thrown from as little as 7.5 feet to as much as 64 feet. A 300" diagonal image is achieved between 23 and 225 feet. Most lens options are motorized zoom, but two are fixed length, manual focus.

Vertical lens shift. With the lens in center position it throws an image with the centerline of the lens intersecting the center of the image. Vertical lens shift will move the image up and down on the screen. The degree of movement available depends upon the lens in use, but the range varies between 90% and 100% of a full picture height in both directions. This is the only option for obtaining a squared up picture on the screen; you may not tilt the projector and square it with vertical keystone correction, as this is not a feature available on the WF10. There is however horizontal keystone correction if you must place the unit off the horizontal axis to the screen. This works with all operating modes except "natural wide," which is the mode used to stretch a 4:3 image to fill the 16:9 screen. If this mode is selected, the horizontal keystone correction is deactivated.

Two-lamp design. The WF10 uses two 250W UHP lamps to achieve the maximum lumen output. The user may turn off either lamp to conserve lamp life. This cuts lumen output in half. Sanyo does not publish lamp life specifications on this unit.

Fan noise. The fan noise on the WF10 is too high for use in a normal home theater environment unless specific steps are taken during installation to provide sound damping without interfering with its cooling system. However by large venue standards, the noise level on this unit is moderate and low in pitch. Fan noise is not reduced when one lamp is deactivated.

Modular connection panel. Located on the left side of the unit as viewed from the rear. This panel houses three terminal boards which can be configured to suit the needs of the user. Terminal board options include one with a single DVI-I port, one with 5 BNCs, and an AV terminal with two composite BNC jacks and an S-video port. They can be mixed and matched in the three slots as the user desires. All terminal boards include audio inputs to drive the two 3W onboard speakers. In addition to the three variable terminal board slots there is a fourth fixed terminal the offers a serial DB9 input and output, a USB port, and a wired remote control. A set of audio outputs on this board can be used to feed an external audio amplifier.

Clearly one of the key distinguishing features of the WF10 is its 4000 ANSI lumen specification, which carves out a special niche as the brightest native 16:9 widescreen projector on the market. Given the tendency for most projectors not to meet advertised specs in actual operation, many will wonder-how far off is this particular claim? The answer: it is dead-on accurate. After calibration we measured actual ANSI lumen output at an amazing 4052 lumens. We can only remember one other projector in the last five years that has measured above its ANSI lumen specification in actual calibrated operation, and most get nowhere near it. By turning off one lamp, you cut light output almost exactly in half. So you still get a full 2000 ANSI lumens while conserving lamp life.

Contrast is rated at 900:1 which, combined with the high light output, is plenty to deliver a picture with excellent color saturation and shadow detail. We had the same experience watching the WF10 as we did the Sanyo PLV-70, another very bright video projector. The added brightness on the screen gives the effect of watching a very large television-a bright, crisp, highly saturated image.

Conventional wisdom says that, when it comes to quality video, contrast is all important and brightness is irrelevant. And it is true that in a dark viewing room and with not too large of a screen, even the dimmest projector can produce a beautiful image. Your eyes adjust to the average light level coming off the screen no matter what it is. But these very bright Sanyo projectors deliver a unique experience. There is a sense of invigorating energy that comes from a bright picture that is missing on dimmer units. We would have thought 4000 lumens to be too bright for comfort on a 120" screen. Not so. The eyes adjust, and you get an image with a commanding presence that is amazingly well-balanced. With this much light the user has much more flexibility in determining ideal screen size and ambient light.

The WF10 is not intended for the home theater market. However it, along with the PLV-70, provide sufficient evidence that projector manufacturers are missing the boat when it comes to lumen output on home theater projectors. The industry is in a rut. We can put a Rover on Mars, but we can't seem to figure out how to build a home theater projector that puts out more than 1000 theoretical lumens and 600 or so real lumens. We need 2000-lumen widescreen machines in this marketplace in order to allow consumers to go to larger screen sizes without sacrificing color saturation and contrast. We need 2000-lumen projectors so that folks can introduce low levels of indirect ambient light without compromising image quality. Yes, there are engineering and marketing trade-offs, mainly "brightness vs. contrast," and "brightness vs. lamp life, heat output, and fan noise," and the all important "brightness vs. product cost." Nevertheless, whoever builds the brighter mousetrap will find a market eagerly awaiting it.

But we digress. We found color performance on the WF10 to be among its strongest characteristics. Flesh tones in particular are outstanding, and overall color accuracy is just about as good as it gets in the digital world. Scaling of both standard and high-definition material is state-of-the-art relative to 1366x768 displays. Brightness uniformity (with the lens that we tested) is very good, falling off by only about 20% from center to the sides of the screen.

One peculiar omission was that of HDCP on the DVI terminal. Perhaps Sanyo is waiting to see if HDCP ever becomes relevant in the industry. If it does, since the WF10 has a modular connection panel we'd presume it would be easy to supply WF10 users an HDCP-enabled DVI board. Meanwhile, the HDTV content being broadcast today has no restrictions, and there was no compatibility problem between the DVI output of our Samsung HDTV receiver (with HDCP) and the DVI input on the WF10.[UPDATE: Sanyo informs us that a DVI terminal with HDCP will be available on the WF10 in May/June timeframe. EP 2/5/04]

The weakest aspect of the WF10 is the menu and remote control. As with all Sanyo projectors we've seen the menu is entirely icon driven and not all that intuitive. The user needs to invest some time exploring the menu by trial and error just to see what it does. The owner's manual does a poor job describing how to execute individual tasks. Moreover, the remote is laid out in such a manner that it is difficult to sense by tactile sensation which button your finger is on. Compounding this was the added irritation that the projector did not always respond reliably to the remote. This leaves the user wondering whether the wrong button was pushed, or whether the projector just didn't get it. The projector does not sense a bounced IR signal from the screen, even at close range, so the remote must be pointed directly at the IR sensors on the projector's front or back panels. The range of the remote is only 15 feet from the unit, rather limited for a large venue projector.

Perhaps the most unfortunate single oversight was not putting an aspect ratio control on the remote. The user must go into the menu and execute seven clicks to change the aspect ratio from 4:3 to 16:9, negotiating four different control buttons on the remote. For anyone expecting to do much switching between 4:3 and 16:9 sources, this will become an irritating nuisance.

The WF10 is targeted toward those who want superb video quality on a larger screen than a consumer would typically use in the home, but not as large as a commercial movie theater. Though it can project an image up to 50 feet diagonal, its idea "image quality vs. screen size" trade-off (assuming 4000-lumen mode) is in the range of 15 to 20 foot diagonal. As ambient light is introduced into the viewing space, screen size should be reduced to maintain adequate contrast performance.

Overall, the confusing menu and remote aside, the WF10 is good fun to fire up and sit down to watch even in a home theater environment as we have here. The spectacle of a brilliant 120" scanline-free 16:9 television screen before one's very eyes is an amazing thing to behold. Between its large scale brilliance and its natural, beautifully accurate color, it has something of a CRT-like quality that puts a smile on the face.

Nevertheless, this projector is best suited for small auditoriums, larger university classrooms, and corporate conference rooms where widescreen video is a significant component in the mix of subject matter. Larger sports bars and Nevada casino sports books are ideal target niches for it as well. Though the WF10 is not as well-suited to home theater, the much smaller, quieter, and much less expensive Sanyo PLV-70 definitely is. With these two units, Sanyo is showing the world that high lumen output can indeed be a vital ingredient in the delivery of a truly engaging video image. We hope the rest of the industry will follow Sanyo's lead in this regard.

For more detailed specifications and connections, check out our Sanyo PLV-WF10 projector page.