After the release of the PLV-Z5 in October of 2006, Sanyo took a breather in their annual updating of their 720p line of projectors, instead choosing to focus on 1080p. This month, the venerable Z5 was finally taken out of production, and its replacement was announced - this time in a stealthy black case. The Sanyo PLV-Z60, Sanyo's newest 720p offering, gives you 470 real ANSI lumens in video optimized mode. Great contrast and vibrant color bring the image on the screen to life. With very little visible pixelation and excellent placement flexibility, the Z60 is a worthy successor to the excellent Z5. Upon release, street prices should be less than $1,199. 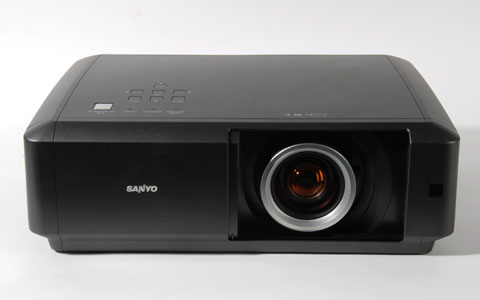 High Video-Optimized Lumen Output. Our test sample of the Z60 outputs 466 ANSI lumens in its brightest video optimized mode (which, for those interested, is Brilliant Cinema, lamp setting A1, color temperature Low 1, widest angle zoom). This is a slight improvement over the Z5's performance in Brilliant Cinema in terms of pure lumens produced, and a relatively large improvement in color fidelity and contrast when using this image mode. At 466 lumens, one could easily power a 120" screen in a light-controlled room, or a 96"-100" screen in a room with some ambient light.

As with all projectors that use long zoom lenses, the Z60 loses a significant amount of light when using the telephoto end of the lens - up to 39% of the total lumen output. With the settings listed above, this works out to 284 ANSI lumens. So, those using the maximum telephoto end of the zoom lens will want to give extra consideration to screen size and room lighting, as a too-large screen or too much ambient light will wash out a 284 lumen image fairly easily.

The low lamp option drops lumen output in any operating mode by 21%, so as one might imagine, using low lamp mode at the telephoto end of the zoom lens reduces lumen output significantly - down to 230 ANSI lumens with the settings listed above.

High ANSI Contrast for an LCD Projector. Most home theater LCD projectors we've tested recently, 720p and 1080p alike, yield an ANSI contrast measurement in the range of 200:1 to 300:1. The Z60 measured 312:1, which gives it a competitive edge over these other projectors. Simply put, the Z60 appears slightly higher in contrast than many of its LCD competitors, though this is only really visible when the two projectors are side by side in a dark viewing environment.Â

Well-saturated, Accurate Color. The Z60's color performance follows in the vibrant, well-saturated footsteps of the Z5. Color was pleasant and accurate out of the box using the "Low 1" color temperature setting, and a bit of fine tuning makes the Z60 look even better. Saturation was strong without being overdone, and overall the Z60 gives images a life-like feel.

Excellent Placement Flexibility. Like the Z5, the Z60 has a 2:1 manual zoom/focus lens, which allows the projector to display a 100" diagonal image from 10' 1" to 20' 2". Practically speaking, the Z60 can be installed in almost any room one would wish to use as a home theater, though the lumen concerns expressed above still hold true.

Three Year Warranty. Sanyo has been offering a three year warranty on their projectors for many years now, and the Z60 has that same excellent warranty. Sanyo states that most repairs are completed within 24 to 72 hours (though this is not a guarantee) and the company pays shipping in both directions. In an age of cost-cutting measures and outsourced technical support, it is nice to see a manufacturer stand behind their product. Sanyo's warranty is one of the best in the business.

Transient Improvement. The Z60 has a control in the Advanced menu called "Transient Improvement," which boosts sharpness and is enabled by default. The problem is, it adds unnatural and unnecessary sharpness, and actually takes away from the natural look of the picture. And, since it's buried in the Advanced menu (which is hidden by default), users might have a hard time finding it so they can disable it. This is a minor annoyance, but on an excellent projector like the Z60, sometimes minor annoyances are easy to live with.

Evolutionary, not Revolutionary. You may notice the frequent comparisons between the Z60 and the Z5, and it's because the two projectors are more alike than they are different. While we would love to report that the Z60 offers performance that is leaps and bounds beyond the Z5, it simply is not true. The Z5 was an excellent projector when it was released in 2006, and it is still an excellent projector today. Those who were considering the Z5 before it was discontinued have every reason to be excited, but the bottom line is that happy Z5 owners have little cause to upgrade.

For a long time, Sanyo's Z5 reigned supreme in the ~$1,200 720p home theater market - that is, until the Epson Cinema 720 came along to de-throne it. Finally, a projector could match the contrast and clarity of the Z5 while exceeding it in other ways. Now that Sanyo's Z60 is coming to market, let's see how it stacks up against the reigning champion.

Lumens. The Cinema 720 is capable of serious light output - 482 ANSI lumens in "Natural" mode, and 727 in "Living" mode. The Sanyo Z60 hits the usable lumen ceiling at 466 ANSI lumens in "Brilliant Cinema" mode. Both projectors have a "Dynamic" mode, but neither are particularly well suited to the display of video or film. In this category, the Cinema 720 has a clear advantage.

Placement Flexibility. Both projectors have a three picture height vertical lens shift and two picture width horizontal shift. Both feature 2:1 manual zoom/focus lenses, though the Cinema 720 has a few extra inches of adjustment range. The bottom line is that both projectors are very easy to install in almost any room.

Connectivity. The Z60 beats the Cinema 720 in connectivity. It has two HDMI 1.3 ports and two component video inputs, while the Cinema 720 has one of each. The Z60 will allow you to connect more devices directly to your projector, which some folks prefer, before being forced to run your video signals through your A/V receiver.

Clarity and Detail. The Cinema 720 projects a beautiful, detailed image, but the Z60 looks incrementally clearer, sharper, and more detailed. Subtle details in HD material seem to jump out on the Z60 slightly moreso than they do on the Cinema 720. While this category is a close call, the Z60 takes it.

Panasonic has not yet released a new 720p projector in this fall, instead focusing on their 1080p line with the upcoming AE3000. However, we decided to see how Panasonic's AX200 fared when placed head to head with Sanyo's new Z60.

Lumen output. The AX200 is clearly and obviously brighter than the Z60 in its brightest mode. The AX200's "Normal" mode is capable of cranking out 1600 ANSI lumens, while the Z60's brightest usable mode for video is Brilliant Cinema at 466 ANSI lumens. For large screens and rooms with considerable ambient light, the AX200 is the easy choice.

Contrast. The AX200 is capable of much brighter whites than the Z60, but black levels suffer in comparison. In comparable image modes, the Z60 has slightly duller whites, but much blacker blacks, making it appear to be higher in contrast. In a light-controlled room, the Z60's contrast advantage becomes more apparent.

Color. Out of the box, color on the Sanyo Z60 is very good, while the AX200 appears oversaturated and slightly greenish. Both can be improved with some fine tuning, but the Z60 wins in this category simply because one can "plug and play."

Sharpness and Clarity. The Z60 has a sharper picture with more apparent detail than the AX200 when displaying identical content over an HDMI connection. It is so clear, in fact, that it almost makes the AX200 appear slightly soft. All in all, the Z60 more accurately portrays the source material, and as such wins this category.

Sanyo's PLV-Z60 is an impressive projector. It delivers a sparkling, pristine image with plenty of pop and accurate color. The 2x zoom lens, extensive lens shift, and abundance of HDMI and component video inputs make it easy to install. It lacks the on/off contrast of the Epson Cinema 720 and the superpowered lumen output of the Panasonic PT-AX200, but it compensates with a beautiful, film-like image that's razor sharp and crystal clear. If you're looking for a new projector for your light-controlled home theater, this is the one for you.

For more detailed specifications and connections, check out our Sanyo PLV-Z60 projector page.

Comments (3) Post a Comment
AV Integrated Posted Oct 20, 2008 2:15 PM PST
Absolutely the best graphical representation of projector placement with lens shif that I have seen to date! I think it could still be a little bit more clear on the graphic - or maybe something that could be clicked on for a bigger, more specific view, but this does beat all and makes it very clear how much range there is.
mike Posted Feb 9, 2009 8:29 AM PST
Could anyone comment on the LCD panels used in this projector ? Is it organic or inorganic ? Or does it really matter in that regard ?
Terry Posted Jan 31, 2014 9:03 PM PST
Will an expert tell me where I can order a replacement filter 1 for the Sanyo PLV Z60 projector?