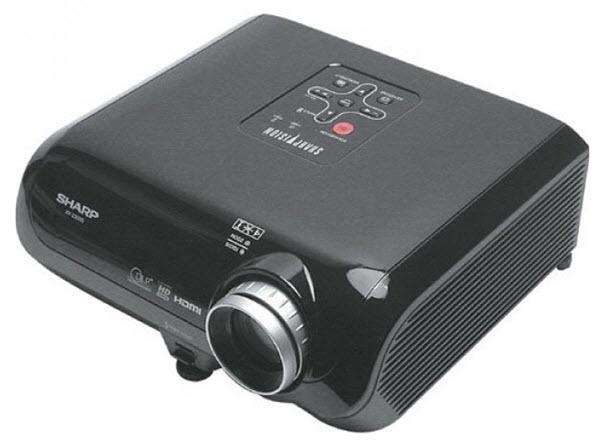 While 1280x768 projectors are becoming more common, those designed for home theater are still rather hard to come by. Native 1280x768 projectors are useful due to their ability to display several different resolutions in native format including HD 720p, as well as computer resolutions XGA (1024x768), and WXGA (1280x768). This makes them particularly versatile as they can be used for widescreen home theater video as well as high quality data presentation in either 4:3 or 15:9. The new Sharp XV-Z3000 is one of these versatile projectors. It is a 1200 ANSI lumen projector sporting a 6500:1 contrast ratio and a myriad of adjustments that make it easy to fine-tune your picture to your individual preferences. At street prices under $3000, it is also designed to bring high definition home theater to your living room while leaving your wallet intact.

The Z3000 is a slick looking projector, in glossy black casework with a prominent "SharpVision" logo on top. When looking at the projector head-on, the lens is mounted off to the right. Air intake is on the underside and exhaust is propelled out the left side. You will want to be sure that there is adequate ventilation and heat dissipation with this projector, as our review sample overheated when we were not as careful as we should have been.

The Z3000 has a short 1.15:1 zoom range, which means it will project a 100" 15:9 image from 9.7' to 11.1'. With 16:9 material, a 100" image is obtained between 9.9' and 11.3' -- not much of a difference. This relatively short throw distance relegates the Z3000 to table or ceiling mounts for the most part. Many people like to place seating for home theater about 1.5x the screen width, which would be about 11 feet in the case of a 100" diagonal image. In this case, ceiling mounting is really the only option unless you want to put the projector on a table between the seats. Rear shelf mounting behind the audience is an alternative if you want to sit closer to the screen than 1.5x the screen width.

However, the Z3000 also has a nearly nonexistent throw angle offset -- the bottom edge of the projected image is roughly 8% of the image height above the centerline of the lens. This small offset is fine for a coffee table placement. However, if you want to ceiling mount, many rooms will require the use of a drop tube if you don't want to tilt the projector downward.

For those who want to sit closer to the screen, another theoretical placement option would be to invert the projector and use a ceiling mount to attach it to the underside of a rear shelf. Don't try to short-cut this solution by inverting the projector and allowing it to rest top down on a shelf. This inhibits heat dissipation through the casework and will cause overheating. Even with the projector attached to the underside of a shelf, we would be concerned about heat build-up around the projector due to it being closed in above and to the rear. A small external fan may be necessary to keep radiant heat from building up around the unit.

In short, the lack of lens shift, the short throw distance, and the modest offset angle on the Z3000 combine to limit your options for placement in your viewing space. While all mounts require some thought, the Z3000 requires a little bit of extra effort. In the end, most users will probably opt for a ceiling mount with a drop tube assembly.

The Z3000's remote control is small, functional, and backlit. There are independent buttons for each source, the standard menu controls, an auto sync button for computer signals, an aspect ratio button, picture mode, keystone settings, iris setting, and freeze frame. There is also a set of buttons for image shift, which can be used to move a 16:9 image vertically within the projector's 15:9 frame. This could prove useful when mounting the projector, as it gives a few more inches of vertical leeway.

The menu system is comprehensive without being confusing. Divided into four sections, the menu is translucent and takes up the upper left hand corner of the screen. The "Picture" menu contains the most options, ranging from basics like contrast, brightness, hue, and saturation to advanced options like 6-axis color adjustment (RGBCMY). Pressing enter on any selection displays that option by itself, which frees up more screen space for adjusting on the fly.

The projector's iris can be set to High Brightness, Medium, or High Contrast, and lumen output varies greatly among these settings. All provide adequate contrast for home theater video, but High Contrast can step it up an extra level if you have adequate light control to take advantage of it.

Color Temperature defaults to 7500K on the menu, but on our test unit it actually measured very close to 6500K which is ideal for video. However, menu setting options range between 5500K and 10500K, should you require it.

The Z3000's DNR noise reduction function has three levels of processing, and it defaults to level 1. Levels 2 and 3 lose some fine picture detail and make edges appear soft, but Level 1 was quite effective in keeping the image clean and free of noise.

BrilliantColor, as described in the manual, increases the brightness of an image while maintaining color integrity. It works exactly as described, in that highlights become brighter while colors remain more or less the same. For the majority of our testing, we left BrilliantColor on setting 1.

The Z3000 is rated at 1200 ANSI lumens. While many projectors do not come close to their rated lumen specifications in video mode, the Z3000 measured 1146 ANSI lumens in its brightest mode (Movie 1 mode, BrilliantColor set to 2, iris at High Brightness, and lamp on high). Even with these settings, video quality was remarkably good - so if you need the Z3000 to double as a Sunday football party projector, it is certainly capable of it. Brightness uniformity was a respectable 87%. If 1200 lumens is too bright for your viewing environment, setting the lamp to low mode drops light output by 20% to 924 ANSI lumens. And for a completely darkened room, we were able to produce a rich, high contrast image by shutting down the iris and turning down BrilliantColor. At these settings our test unit produced 352 ANSI lumens--ideal for a high contrast image in a darkened space.

Contrast is rated at 6500:1 when the iris is in High Contrast mode. While this does come at the expense of lumen output, we found contrast performance at this setting to be exemplary. Black level is very deep, especially after knocking Brightness down a few pegs. Shadow detail in film content is clear and well-defined, which makes dark scenes easy to watch. The Z3000 did a fine job of accurately reproducing the ten-step grayscale test patterns, even when not in High Contrast mode. Opening the iris via the menu control allows more light to reach the screen and reduces contrast. Still, with any iris setting, the Z3000 delivers a dynamic, engaging picture.

With the Z3000's factory default settings, color accuracy is quite good, but a little fine tuning makes it even better. Green was a tad yellow, which can be fixed by adjusting the six-axis adjustments mentioned earlier. Flesh tones also needed a touch of work, but after some minor tweaking the Z3000 looked very accurate indeed. Saturation is solid with no discernable "push" towards any specific color. Many users will likely be happy with color as it is with the factory settings, but if you are not, it is easy to adjust via the comprehensive menu system.

Deinterlacing seemed to struggle on difficult elements, such as complex fabric patterns in characters' clothing or elaborate detail in window shades. If you have a DVD player that has quality onboard deinterlacing, you may wish to use that rather than let the projector do the heavy lifting. If not, we would recommend switching between the two devices to see which performs deinterlacing more cleanly.

The Sharp Z3000 and Optoma HD7100 are close to the same resolution and in the same same price bracket of roughly $3000. Both can project 720p HD content without scaling, and both are intended for home theater. However, there are some key differences to consider between the two.

The HD7100's native resolution is 1280x720, which is perfect for home theater and high definition content. The Z3000's native resolution is 1280x768, which will display 1280x720 content natively with black bars above and below the image, 1024x768 data content natively with black bars to either side, or 1280x768 signals in full frame. So while the HD7100 is in a standard home theater resolution, the Z3000 is more versatile in what signals it can display natively.

The HD7100 maxes out at 552 ANSI lumens when properly set up for home theater use. Contrast is rated at 5000:1, and the DarkChip3 makes for some truly impressive black levels and shadow detail. The Z3000 can reach 1143 ANSI lumens at its brightest setting. At more reasonable home theater settings (low lamp mode and medium iris), it still pumps out 506 ANSI lumens. It is also rated at 6500:1 contrast, in part due to the iris system. In head-to-head testing, it became clear that the Z3000 was capable of higher lumen output than the HD7100 as well as better contrast, though reaching those two levels simultaneously is nigh impossible. However, when we matched the lumen output of the Z3000 to that of the HD7100, the Z3000 showed definite higher contrast and deeper black level.

The HD7100 has impressive image sharpness and clarity, though it does show a fair amount of image noise. The Z3000 has significantly less noise than the HD7100, even without the use of the DNR setting. However, images appeared slightly softer on the Z3000 than they did on the HD7100. This added softness is not noticeable in anything but a side-by-side comparison, though.

The HD7100 has a manual 1.25:1 zoom lens, as well as vertical and horizontal lens shift. The Z3000 is clearly outclassed in this regard, with its 1.15:1 zoom lens and lack of lens shift. The two machines have roughly equivalent throw distances, though the HD7100's lens shift makes for easier mounting in a variety of situations.

With the Z3000, you gain brightness and contrast, as well as image flexibility. The Z3000 can be a bright "Sunday afternoon" projector, or a high contrast home theater projector, depending on need. The HD7100 gives greater placement flexibility, at the expense of lumen output. Both offer excellent image quality around $3000 street, and certainly deliver the "wow" factor associated with high definition projection.

The Sharp Z3000 shines in many respects, but lacks a few features that would make it easy to install in a variety of settings. It has a wide range of lumen outputs that make it great either for ambeint light or dark theater viewing. Home theater material looks sharp and three-dimensional, and the image has no shortage of "pop." However, it has a small throw angle offset and no lens shift capability. So installation options are limited. Despite all this, if it fits in your theater, we highly recommend it. At $3000, it provides great performance with a variety of video and computer source signals at an agreeable price.

For more detailed specifications and connections, check out our SharpVision XV-Z3000 projector page.