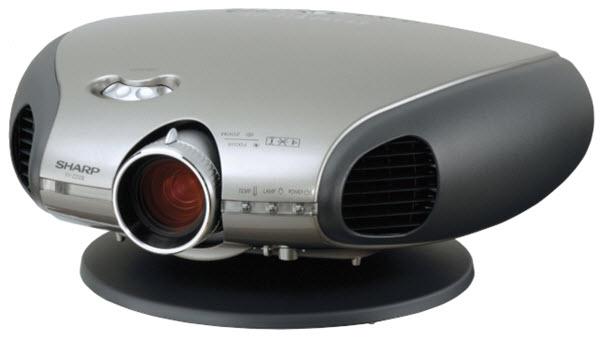 Following the success of the higher end XV-Z9000U, SharpVision has now brought some of that video technology down into a less expensive solution with the XV-Z90U and its alter ego, the Theago DT-200, a moniker condensed from the concept "theater on the go."

Both of these models carry a retail price of $3,995. They will be reviewed together here because they are in fact the same projector, the only difference between them being the throw distance of the lenses. The Z90 has a longer throw for larger projection spaces, and the Theago has the shorter throw lens for those who have limited space constraints. Except where noted, we will henceforth use the shorthand term "Z90" in a collective sense with the intention that the comments pertain to both the XV-Z90U and the Theago DT-200.

The Z90 is a DLP-based projector that uses a standard SVGA resolution (800x600) 0.55" DLP chip. So is it much lower in resolution than its big brother, the XV-Z9000U. However, like the Z9000, it features a 5x speed, six-segment color wheel and some of the same video processing electronics. It is rated at 600 ANSI lumens and 1200:1 contrast.

The Z90 features attractive, highly stylized silver casework. It comes with a swivel base for ease of coffee table set-up. The base can be removed if you wish to ceiling mount it. In addition, it has a manual vertical lens shift that lets you move the image up and down up to one full screen height, making set up all that much easier. The 1.2x manual zoom lens gives you some latitude to adjust the picture size to a particular screen without requiring exact positioning of the projector.

Horizontal and vertical keystone correction is also a standard feature of the Z90. This lets you position the projector off-axis, and still square the image with a screen on the wall.

The projector is portable and easy to handle and install. It weighs 8.4 lbs, and is 14.5" wide, 13" long, and about 6" high including the swivel stand.

The Z90 has four video inputs on the connection panel. Input 1 is three RCA jacks for component, Input 2 is digital DVI-I, Input 3 is S-video, and Input 4 is a composite RCA jack. There is also an RS-232C connector. There are no speakers on this projector, and thus no audio connectors.

The light source is a 150-watt SHP lamp with a 2500-hour lamp life, or 25% more than the typical 2000-hour life on many competing units. Like virtually all Sharp products, the menu is attractive, comfortably laid out and easy to use. For each video input you can adjust contrast, brightness, color, tint, sharpness, red, and blue. There is also a color temperature adjustment from 5500 kelvins to 10,500. The system's default setting is 8500k. However 6500k is the preferred setting for NTSC color material. The warmer 5500k setting should be used for classic black and white films if you wish to approximate the experience of the original theatrical presentations. (This is true on all projectors by the way.)

For each video input you can also select from four pre-programmed gamma settings. There is also a "white emphasis" feature that could be engaged or not (we suggest not).

In the XV-Z90U owners manual there is an "Advanced Picture Adjustment" feature that is not accessible via the initial menu. It gives you independent control of contrast and brightness for red, green, and blue. You can access this screen by pushing the sequence ENTER/ENTER/UNDO/UNDO/ENTER/ENTER/MENU on the projector's control panel. This feature is NOT documented in the DT-200 owner's manual, but it is nevertheless available on the projector.

All calibrations for each set up in both the basic and advanced control menus can be saved in up to 5 memories.

As noted above, the difference between the XV-Z90U and the Theago DT-200 is the throw distance. And it is a big difference. To throw a 100" 4:3 image with the XV-Z90U, you need to place it in the range of 17 to 20 feet from the screen. To fill the same screen with the DT-200, it needs to sit just 10.3 to 12 feet from the screen. So the DT-200 is the more appropriate machine for home theater enthusiasts who don't have larger rooms to convert into a theater. On the other hand, if your room is 20 feet long, the XV-Z90U will let you project from the back of the room and keep you from having to ceiling mount your unit directly in the middle of the room where it might look a bit odd. If it is a dedicated theater room, it may be no big deal. But if it is a multi-purpose room, this could be an important consideration.

Both the XV-Z90U and the DT-200 Theago models come with just a one-year warranty. This is unusual in the projector industry where the typical standard warranty is two years, and three-year warranties are common.

The strongest performance characteristic of the Z90 is color balance and saturation. In terms of color, this is a beautiful projector. Saturated colors are sufficiently but not garishly saturated, pastels are appropriately subtle, flesh tones are perfect. In short, everything looks entirely natural, which is the ultimate objective. In terms of its color dynamics, the Z90 is probably renders the best color of any projector we've yet seen in its price range.

In terms of contrast, shadow detail, and black levels the Z90 performs admirably as well. At contrast ratings of 1200:1, the image sparkles. It does not surpass leading edge competitive units in this area, but it holds its own with no problem.

Readers may be concerned about the brightness rating of 600 ANSI lumens. As we have noted in other writings, when in a dark room the eyes adjust to a wide range of light level. And 600 lumens is plenty adequate to light up a 100" diagonal screen.

Between the two test units available to us, despite their common rating of 600 ANSI lumens, we found that the XV-Z90U measured 14% brighter than the DT-200 Theago. It is possible that this differential could be due to manufacturing variances in either the lamps or other elements in the light engines. So we are not prepared to make any definitive statement about the relative brightness of these two models based on the comparative testing of two random samples. However, the results made us suspect that the longer throw lens on the XV-Z90U may also be more light-efficient.

Fan noise is low in both volume and pitch. It is not silent, but the noise is unobtrusive and should not be a problem for anyone but the consumer who demands perfect silence. There is no light leakage from the rear of the unit, so it can be coffee table mounted between you and the screen without creating any distractions. There is a very slight bit of dim light leakage from the exhaust vent in the front, but it is of no consequence.

Perhaps the weakest aspect of the Z90's performance is in the area of resolution. This is a standard 4:3 format SVGA (800x600) machine. Accordingly there is some pixelation that is apparently at viewing distances of anything less that 2x the screen width. Pixelation is most readily apparent in text, subtitles, and credits. Furthermore, details tend to get lost or fuzzed to a degree that they do not on the better XGA resolution products in this same price range. This is due simply to the physical limitation of the lower resolution chip. However you probably won't be bothered by either of these things if you use a smaller screen, or maintain a viewing distance greater than 2x the screen width.

Overall, the Z90 is a well-made product that produces a very satisfying image. If you see it demo'd by any of Sharp's specialty retailers who are carrying it, you will be quite impressed with the image. You will be especially blown away if it is demo'd on a relatively small screen, as is often the case in retail shops. Small screen demos always make a projector look better than it will on your 100" screen at home—something you should be acutely aware of when you shop.

As impressive as the XV-Z90U and the Theago DT-200 are, when you factor in the price tag of $3,995, the question of value for the money takes center stage. Readers will recall that we were highly enthused about the incredible price/performance of the SharpVision Z9000. However, given the present competition in the $3,000 to $4,000 price range, it does not appear to us that Sharp has delivered an equally impressive price/performance proposition with these units. Keep in mind that distribution of these models is restricted to SharpVision retailers and mass merchandisers. Since distribution is limited, it means that you are likely to pay full retail price, or very close to it. Thus buyers should be aware of alternatives that may deliver better overall performance for the money.

This is not to say that the LT240 is better in all respects. For example it has a 2x speed color wheel vs. the Z90's 5x speed. That means that viewers who may be able to detect rainbow artifacts will see less of them on the Z90 than they would on the LT240. And in general we would say that the Z90 has an edge in overall color performance, although both units are extremely good. The Z90 has a 2500 hour lamp life, while in eco-mode the LT240 is at 2000 hours.

The major advantage of the LT240 over the Z90 is in resolution. There is no pixelation at any normal viewing distance on the LT240. And the combination of XGA resolution and superb scaling makes the rendering of detail more precise (or technically speaking, less imprecise). Thus the LT240 delivers overall a sharper image.

We are impressed with the quality, workmanship, and design characteristics of the Z90 products. The picture is beautiful in most respects. If the image is viewed from a sufficient distance the inherent limitations of its SVGA resolution become moot, and the image overall is quite exciting.

If this product had been released at a retail price of $2,995, and discounted to street prices in the $2500 range, we would be behind it 100%. Given the downward fluidity of prices in the projector market, this one is one to keep an eye on for the future. Sharp could lower prices on these units and the value proposition could change at any time.

For more detailed specifications and connections, check out our SharpVision XV-Z90U projector page.