The Sony VPL-PHZ10 is an outstanding value. Built around Sony's 20,000 hour Z-Phosphor laser light source and its BrightEra 3LCD engine, it delivers vibrant color for graphics, 1920x1200 native resolution for fine detail, and both video and film quality suitable for sports bars and for showing full-length movies. Although rated at 5,000 lumens, the more intriguing number is the roughly 4,000 lumens we measured in Constant Brightness mode, which promises no lumen output degradation over the life of the projector.

Designed primarily for large rooms, including auditorium-style conference rooms and classrooms, the PHZ10 also includes features that make it attractive for displays and signs. Among these are 360-degree orientation in any axis and maintenance-free operation thanks in part to an automated filter-cleaning system that removes dust every 100 hours.

In today's market, the PHZ10 is a bargain even at it $5,000 MSRP, and it will be more so at its actual street prices. The official education price is $2,999. If you're not an education buyer, you'll want to check actual prices with Sony resellers.

The PHZ10's image quality is in the top tier for business and education projectors for everything from maintaining crisp text in spreadsheets and fine detail in line drawings to delivering vibrant colors in graphics and highly watchable video and film. It's not in the same league for movies as a similarly priced home theater projector, and it doesn't offer 3D support. However, its image quality beats low-end home theater projectors, with the bonus of much higher brightness for standing up to ambient light. 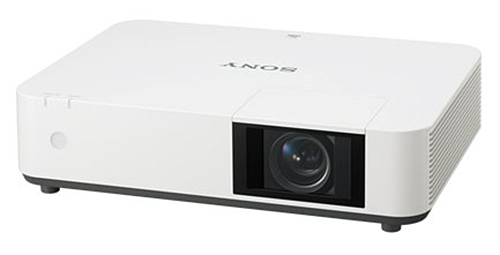 All three predefined color modes--Presentation, Dynamic, and Standard--are customizable, but all three are also eminently usable straight out of the box. As is typical for laser-based models, even Presentation, which is the brightest mode, has only a hint of bias--greenish yellow in this case--rather than the impossible-to-miss green bias that's common in the brightest modes of most projectors.

Colors for graphics are vibrant and nicely saturated in all color modes, and colors for film and video are close enough to accurate even in the brightest mode to use it without a second thought for presentations that include photos and short video or film clips.

For extended video or film sessions, both Dynamic and Standard modes offer better color accuracy, with both coming far closer than Presentation mode to matching the calibrated projector we use for comparison. But if you need the higher brightness, Presentation mode's colors are close enough to accurate to let you watch a full length movie without being distracted by memory colors being jarringly outside a realistic range.

The PHZ10's blacks are typical for LCD-based business projectors. When viewed in a dark room, black areas in images are less than solid black, which translates to a low contrast ratio and makes colors in video and film look a touch flat. However, this 5000-lumen projector is designed for use in ambient light which compromises black levels anyway. So the weaker black level has little to no effect in the PHZ10's intended viewing environment.

The projector also has some video processing features that are more typical of home theater projectors and which improved the image in our tests without adding artifacts. Contrast Enhancement, for example, adds a noticeable boost to apparent contrast. And Sony's Reality Creation, which Sony describes as "optimizing every pixel" has the effect of making the image sharper. It's not doing any edge enhancement according to Sony, but turning it on has the same visual impact as removing a soft focus filter from the lens.

Brightness. Our test unit measured 4880 center lumens of brightness, which is very close to the 5000 lumen spec. ANSI lumen measurements typically run a bit lower than center lumens since they take partial account of brightness uniformity. ProjectorCentral uses the ANSI protocol for lumen readings, and our measured ANSI lumens for each of the PHZ10's predefined color modes with Standard, Middle, and Low power are as follows.

Presentation Optimized Lumens. Presentation mode without any adjustment offers vibrant color for graphics and far more accurate color for photorealistic images than most projectors' brightest modes. The combination makes it a good choice even for presentations that include photos and video clips. At about 4400 lumens, it's bright enough for a 160" 16:10 image in moderate ambient light.

Video Optimized Lumens. With some minor tweaking and no loss of brightness, Dynamic mode delivers color that's close to matching a calibrated projector we use for comparison. That puts our video optimized setting at 3275 lumens.

Zoom Lens Effect. The zoom lens curtails light by only 13% at the full telephoto setting compared with the full wide angle setting. That's only a modest loss for a 1.45x zoom, and just on the cusp of being enough to require taking it into account when you're deciding how far to place the projector from the screen.

Fan noise. The PHZ10's fan noise is low for its brightness. Both the Middle power mode (rated at 28 dB), and Low mode (25 dB), would be noticeable during quiet moments in a small room. In the larger rooms this level of brightness is meant for, however, the unchanging, moderate-pitch sound is unlikely to be distracting to anyone seated more than a few feet from the projector. Much the same is true for the Standard power mode (rated at 36 dB) at a minimum of 10 or 12 feet away.

In High Altitude mode the fan noise is louder and adds an overlay of a slight high-pitched whine. Even in Low mode, the sound could be distracting during a presentation for anyone within about 20 feet--a minimum distance that increases to about 30 feet for Middle mode and 40 feet for Standard mode. If you need to use High Altitude mode, which Sony recommends for elevations of 5,000 feet and above, you'll probably want to stay with Low mode, or position the projector behind a false wall to help deaden the sound.

Input lag. Our lag meter measures 37 ms in all modes.

Warranty. The price includes a 5 year/12,000 hour warranty, including the laser-phosphor light source.

At 19.2 pounds and 4.4" x 20" x 14" (HWD), the PHZ10 is meant for fixed installation. Its 1.45x zoom and both vertical and horizontal lens shift give it lots of flexibility for placement, whether on a flat surface or in a ceiling mount. In addition, its four-corner keystone adjustment allows basic stacking, and its support for mounting in any orientation over 360 degrees in any axis can be useful for displays and signs.

The throw distance for a 150" 16:10 image ranges from roughly 13.5 to 20 feet. The Projection Calculator will let you find the range for the image size you want.

Connection Panel. The input panel offers two HDMI ports, one HDBaseT, one RJ45 network port, one analog RGB/component 15-pin VGA, one composite video, two USBs (Type and and Type B), one RS232 remote control, and one stereo mini audio out.

No built-in edge-blending. The lack of built-in edge blending limits the PHZ10's usefulness for large displays that require multiple projectors.

24/7 operation. The PHZ10 can run 24/7, but Sony warns that it should be limited to showing ever-changing images. A single, still image can result in burn-in.

Whether set up in a conference room, higher-ed classroom, sports bar, or as a display or sign, the Sony VPL-PHZ10 can deliver a consistent image brightness--measured at 4,000 lumens in Constant Brightness mode at Standard power--for thousands of maintenance-free hours, and 24/7 if needed. It's bright enough for a 160" image in moderate ambient light with Constant Brightness off, offers 1920x1200 native resolution for maintaining detail, and delivers vibrant color for presentations as well as video and film quality that's outdoes low-end home theater projectors. All this makes it a bargain--and highly recommended--at its $5,000 MSRP, and even more so at its much lower street prices as well as at its education price of $2,999.

For more detailed specifications and connections, check out our Sony VPL-PHZ10 projector page.

Comments (1) Post a Comment
Ed DeBolt Posted Jan 30, 2018 3:26 PM PST
I purchased this unit for my home theater using a 120 inch diagonal screen ( 96 inch width by 72 inch height. It is a Daylite standard movie screen.I use it for movies and satellite TV. The picture is absolutely awesome! The high lumens brihtness renders a very crisp and high definition picture!

I have owned three previous projectors, then purchased this Sony laser unit for just under three thousand dollars.I am totally satisfied with a product that exceeded my expectations. I considered a 4K projector, but from a distance of ten feet or more from the creen, I just can't see much difference. I am 67 years old so I don't have real young eyes, butafter looking at 4K vs HD TV's at various outlets, as I back away from the screens, past ten feet to fifteen feet from the sreen ( my setup has my chairs and couches around 13 to 15 feet from the screen.

The high definition picture this Sony laser projector renders is just outstanding! IN a high end store I compared a new Samsung 4K 75 inch screen vs a 75 inch Samsung high definition screen, at a distance of 12 feet I just did not see enough difference to warrant spending an additional $2,000 for 4K. Also there is not a lot of 4K material out there right now.

I also found out that you have to sit closer to 4 to 8 feet of a 4K TV to really appreciate the difference. I have a large living room, 18 feet wide by 23 feet long, and with the variable aspect ratio, I can easily fill the entire screen or watch a movie in it's normal cinematic aspect ration. The setup and focus is so easy with this Sony! And there are no filters to remove and wash every several weeks, it cleans itself! My unit sets on a audio-video cabinet eleven and one half feet from my screen, all my video and audio devices are in this cabinet and the Sony sets on top about 28 inches above the floor.

I am absolutely satisfied with my Sony !