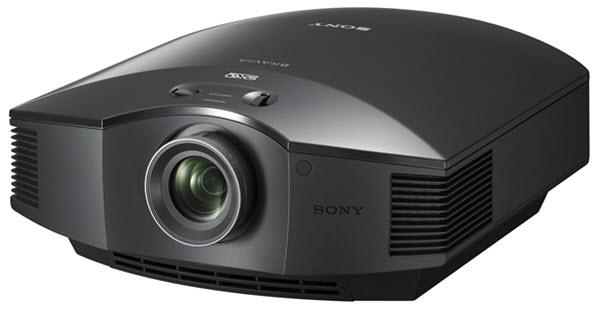 Sony's newest 1080p projector, the Bravia VPL-HW10, is now available, and it is easily the finest projector from Sony we've yet seen. The HW10 is brighter than previous models by a decent margin, has excellent contrast, open midtones, a sharp picture, and good placement flexibility. The Sony VPL-HW10 delivers a vibrant, dynamic picture, and it is a very competitive projector among the new 1080p resolution products coming to market this fall. 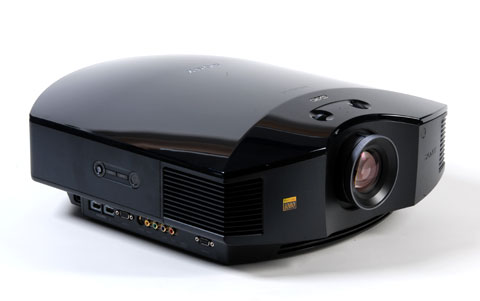 High Lumen Output. Unlike previous Sony 1080p projectors, the HW10 is a powerhouse in video optimized mode at 697 ANSI lumens. In a light-controlled room, that is enough light to power more or less any screen size you choose. In fact, on screens of 120" or less, it can be too much light and may lead to eye strain unless you tone it down a bit. Fortunately, low lamp mode on the HW10 drops lumen output 32% to 477 lumens, which is still plenty of light for many screens in light-controlled rooms.

The HW10 has a 1.6:1 zoom lens which delivers the maximum amount of light at its widest angle setting. When at maximum telephoto (yielding the smallest image at a given distance), the HW10 loses 22% of its lumen output. For example, its 697 video optimized lumens drop to 547 lumens, and its 477 lumens in low lamp mode drop to 372 lumens. This is still brighter than most competing models when using their low lamp modes and the long ends of their zoom lenses.

The HW10 has two brighter modes - Standard at 711 lumens and Dynamic at 747 lumens. However, these modes take a serious hit in color accuracy and do not deliver much of an increase in lumen output, so they don't represent an attractive alternative to the video optimized mode.

High Contrast. In measuring our test unit, the HW10 registered 416:1 ANSI contrast, which is the highest ANSI number we've see so far on an LCOS projector. Sony's big improvement in SXRD ANSI contrast keeps it fully competitive and comparable to the improvements made by LCD manufacturers. (By comparison, the Mitsubishi HC7000 measured 409:1, and the Panasonic AE3000 measured 443:1.) The HW10 displays solid deep blacks, nuanced shadow detail, and excellent overall "pop" and three-dimensionality.

The HW10 has an auto iris which is enabled by default. The iris adjusts quickly enough that we did not see any transitions, though the effects of the iris are clear. In dark scenes, black levels drop significantly. The high contrast makes the HW10's picture particularly eye-popping when viewed in a dark environment.

Good color after calibration. On our test unit, the Medium color temperature was reasonably well-balanced at its factory defaults, though there was room for improvement. After some calibration, the HW10 produced accurate, natural color with excellent saturation. Our calibration came very close to the 6500K standard across most of the gray scale. The HW10 has three user-programmable color modes, so you can set up one for black and white movies, one for color films, and one for HD sports or video games.

Sharp Picture. Sharpness and clarity of image is imperative in a high definition projector, and the HW10 does a fine job of maintaining fine detail. The HW10 is comparable in image sharpness to several other recently released 1080p projectors, such as the Samsung SP-A800B and Panasonic AE3000. As far as sharpness is concerned, the Mitsubishi HC7000 and HC6500 stand out as slightly sharper than the rest of the 1080p competition so far this fall. However, the HW10 and the other 1080p projectors are certainly competitive in this regard.

Quiet Operation. The HW10 uses a quiet exhaust fan, and the projector is nearly silent during operation, even in high lamp mode.

Image noise. During comparative testing, the HW10 has incrementally more image noise than some of the LCD competition in the same price bracket. However, the HW10 has very good noise reduction onboard, which reduces the amount of visible noise without adversely affecting image sharpness. However, completely eliminating noise is an impossibility.

Lens Not Powered. Several competing models have powered zoom, focus, and lens shift, while the HW10 has manual controls on all three. Most people will not be affected by this omission, though a 1.6:1 lens does open up the possibility of using the lens's zoom to display 2.35:1 movies in large format without the use of an anamorphic lens. For those who wish to set up a 2.35 screen and use the zoom to accommodate it, a powered zoom and lens shift would have been helpful.

No Frame Interpolation. Several 1080p projectors coming to market this season feature some form of frame interpolation, a technology designed to show video and film at a higher frame rate by creating interim frames. The technology serves to greatly reduce or eliminate judder. The HW10 lacks this feature.

The HW10 is one of the strongest home theater projectors we've yet seen from Sony, and is a great option for large screen 1080p projection in a light-controlled room. With 697 usable lumens and strong contrast performance, the HW10 can be used with screens up to 150" diagonal and beyond. Sony's HW10 brings together the brightness and contrast performance needed for large screen home theater with good placement flexibility, quiet operation, and natural, vibrant color.

In our experience, Sony home theater projectors tend to cost more than competing units will similar performance and features. Part of what buyers pay for is the brand name. However, this can be justified. Sony has a solid reputation for excellent customer service and support, and our direct experience with Sony support has been outstanding. Sony's projectors typically have excellent picture quality, and the HW10 is no exception. The HW10 lacks some of the features available on other 1080p projectors released this fall, and it costs somewhat more; as a result we are unable to assign it five stars for value. But it certainly does merit five stars for performance. Those who go for the HW10 will be enjoying a terrific picture with the confidence they've bought from a vendor with an exceptional commitment to service and support.

For more detailed specifications and connections, check out our Sony VPL-HW10 projector page.

Comments (17) Post a Comment
Eiffel Posted Nov 7, 2008 4:08 PM PST
I'd be interested in a side by side comparison with the AE3000 as the specs and price are fairly close in the end (brightness, contrast, noise, etc.), although the HW10 has fewer features (Powerzoom, zoom range, frame interpolation, etc.)

Any reason to pick this projector over the Panny one?
Felix Alonzo Posted Nov 7, 2008 4:44 PM PST
I agree with Eiffel, there's gotta be a shootout between the AE3000 and the HW10. These two are at the top of my list for my next upgrade.
madshi Posted Nov 7, 2008 4:57 PM PST
Interestingly, in Germany the HW10 is very cheap with only 1900 Euros while the AE3000 costs 2700 Euros.
LORDD Posted Nov 8, 2008 5:11 AM PST
A mi m eha salido en espaÃ±a el HW10 por 1695â¬, si lo comparamos con los 2300 que cuesta el AE3000, no hay discusion alguna.
EeeTee Posted Nov 8, 2008 12:58 PM PST
If Sony has "an exceptional commitment to service and support" that would represent a significant improvement over my personal experience, and many others I know, who owned early Sony widescreen projectors (VPL-W400Q, VW10HT-VW12HT). Sony consistently ducked responsibility for inherent design/build issues and voided/avoided warranty repairs. MY experience with Sony Service is why I would be unlikely to buy a Sony again.
Khalid Posted Nov 8, 2008 11:11 PM PST
I think after my research, i have reached the conclusion that if one can afford, Panasonic BD-55 Blu-Ray player and AE-3000 projector is a leathal combination! And nothing can beat it ...yet! I wonder when AE3000 will come out with LED or Laser as a light source so i may use it as a HD Television as well ... not worrying about the bulb crap.
Joseph Lackay Posted Nov 11, 2008 11:58 AM PST
I need to buy this product. Please send me complete information.
Senaka Perera Posted Nov 20, 2008 11:59 PM PST
I love this product.Wish if any body could offer this as a gift as it was my ambtion from the child hood to owns a Home Theatre.
george Posted Nov 27, 2008 7:10 PM PST
I am having a hard time finding exactly the projector I need. My diagonal is 60 in. exactly and the throw is 14 ft. I cannot change these dimensions. Cannot find a projector that fits.Help.
Bill Posted Jan 16, 2009 6:40 PM PST
I had the projector a for week it is stunning. I got setting and calibration from AVS Forum. The picture is unbelievable I owned the Epson 1083 there is no comparison the sony is true killer. I am very happy It's a keeper.
Alec Posted Mar 1, 2009 5:59 PM PST
I agree with EeeTee. My first projector was a Sony VPL-HS2 and I was fooled by the name. I thought Sony products were good, but my projector failed after less than a month. Sony fixed it inder warranty, but I had to pay over a hundred dollars for shipping and wait two weeks. It began failing again shortly before the warranty expired. Sony said that there was nothing wrong with it, and when it totally failed two months later, a week after the warranty ran out, they offered to fix it for $1000, $400 less than I paid for it new. Personally, I won't buy another Sony product.
Thim Lee Posted Jun 20, 2009 7:59 PM PST
This projector is awesome for the money. I have had the VPL-HS20 for about three year and as technology change so has performance and I can say with conviction that it is worth the upgrade. Never had any problem with my previous projector and was extremely hapy with the old and the new Sony. Great picture right out of the box.
David Q Posted Jun 22, 2009 2:06 PM PST
I'm interested in purchasing a Sony VPL-HW10 and matching it with a 92" Screen Innovations fixed screen. Question: How far from the wall should I install the projector? I need an idea to have the pre-wiring done in the media room. Also, any suggestions on a combo projector/screen? Thanks.
Crusty Posted Oct 13, 2009 8:26 AM PST
I have owned this projector for nearly 10 months and it still gives me the same satisfaction that it delivered the first day I purchased it. Many of my friends are awed at the pq and it has been trouble fee so far (fingers crossed)
Blue Laine-Beveridge Posted Oct 14, 2009 4:24 AM PST
The review states in the first sentence that the HW-10 "is easily the finest projector from Sony we've yet seen"; then the first sentence of the conclusion states it "is one of the strongest home theater projectors we've yet seen from Sony". Aren't these two different statements?
wizard Posted Oct 20, 2009 6:20 PM PST
i have seen the sony sxrd and panasonics ae3000 side by side.the panasonic hands down blew the sony out of the water.Pay the extra cash for the panasonic.it is well worth it.if you do your homework you will find you can get a free bulb with the panasonic making them pretty much the same price.
Last Toy Posted Nov 3, 2009 7:20 PM PST
Bought this after the AE4000 cratered local prices, picked up a demo with 2 hrs on it for 2600CAD. Running it with an Optoma 1.8 gain 106" screen from 14'. Dialed in the calibration numbers I found online, and you know, for an "entry level" projector, it's not bad at all. Going to have it pro calibrated by a guy here in Calgary that actually set THX up with their calibration program. He did one tv for me years ago, it was astonishing to see the difference. From what I have seen so far from it uncalibrated though, blacks are pretty darn black, skin tones look true, pretty decent all the way around. Numbers are numbers, but the eyes like what they see.