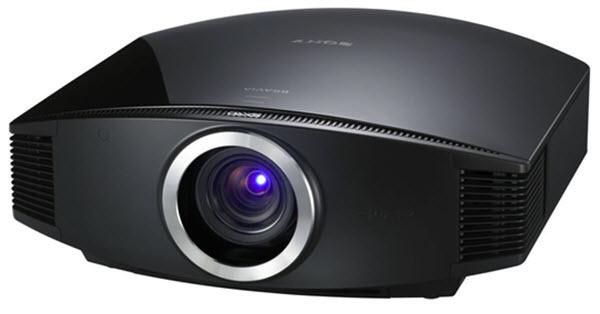 Sony's flagship home theater model, the BRAVIA VPL-VW85, is a behemoth of a 1080p projector. Designed from the ground up for home cinema use, the VW85 sports 800 ANSI lumens of real-world brightness and a 120,000:1 claimed contrast ratio. Amenities like a 1.55:1 powered zoom lens with both vertical and horizontal lens shift make it easy to place the VW85 in a wide variety of theaters.

However, few people buy a projector like this for the features since there are many projectors that have the same features but cost much less. Most potential buyers of the VW85 are concerned with one thing: image quality. When you pop in a Blu-Ray movie or turn on Sunday's game, what you get is the experience as it is meant to be seen, right there in your home theater. The VW85 has a dynamic, three-dimensional image that jumps off the screen, with color so life-like you'd swear you were there. Home theater excellence is attainable for just under $8,000 from your local custom installer.

Light output. The VPL-VW85 is rated for 800 lumens of brightness. In the ideal mode for home cinema--Cinema 3 with a custom color temperature--our test unit measured 763 lumens, or 95% of the specified output. Many home theater projectors have much higher lumen ratings, but once they are calibrated they lose a significant amount of light, causing cinema mode to be much dimmer than the specification would imply. 763 real, color-calibrated lumens in cinema mode is excellent performance by any metric, and the VW85 outputs more than enough light to be used on even a 160" screen in a theater with proper light control. On smaller screens, one might wish to engage low lamp mode to decrease output. Switching to low lamp mode reduces light output by 36%, to 490 lumens. This is just about right for a 120" screen in a light-controlled room or a 100" screen with mild ambient light.

These lumen readings were taken with the lens at its widest angle. As with all zoom lenses, some light is always lost when moving the lens from its widest angle setting to the longest throw; in this case, the drop-off was 23%. This would bring Cinema 3 to 586 lumens in high lamp mode or 376 lumens in low lamp mode. Even at 376 lumens, using the VW85 on a 100" diagonal low-gain screen results in a bright, engaging picture.

Contrast. In a darkened room, the VW85 has great contrast. Thanks to the action of an automatic iris, dark scenes are dimmed down significantly, while bright scenes are opened up. This allows both highlights and shadows to be fully expressed, though never in the same scene--obviously, the iris cannot selectively dim some parts of an image while brightening others. Even in scenes without extreme highlights or shadows, the VW85 still has a very three-dimensional picture. And when switching between the two extremes, the operation of the iris was undetectable, even during rapid changes between low and high average light levels. 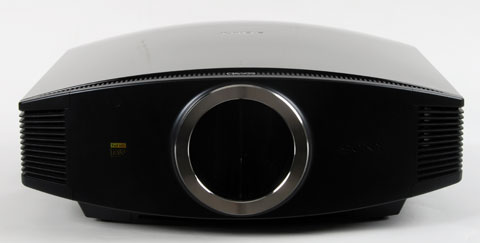 Color. As expected from a projector of this caliber, color is impeccable. We tested the VW85 with our CalMAN Professional system. Even fresh out of the box, grayscale tracking in Cinema 3 measured an average white balance of 6350K, very close to the 6500K reference point for video and film. Still, after some fine-tuning of the color temperature controls, grayscale tracking can be improved even further. Likewise, the color gamut matched the reference standard very closely, with a deviation so small that it is for all practical purposes nonexistent.

The settings we used on our test sample are as follows:

At factory defaults, the VW85's color saturation is too low. This is easy to fix by simply increasing color saturation. The saturation control runs from 0 to 100 and defaults to 50; our preferred setting was 55. Be careful not to overdrive saturation, as it will begin to make objects look artificial and one-dimensional.

Sharpness and Clarity. The VW85 uses a three-chip SXRD light engine, SXRD being Sony's trade name for LCoS. We saw no undue softness on the VW85, nor did we see any evidence of panel misalignment, but the image is also not quite as sharp as the Optoma HD8600, which sells for about the same price. The VW85 looks plenty sharp on its own, and the HD8600's subtle edge in this regard is only evident when the two models are placed side by side.

Placement Flexibility. The VW85 has a 1.55:1 powered zoom/focus lens as well as powered H/V lens shift. It can display a 120" diagonal 16:9 image from throw distances of 12' 9" to 19'. Likewise, the image can be placed either completely above or completely below the centerline of the lens, as well as moved up to 20% in either direction horizontally. Keep in mind that the total range of the lens shift is like an oval; using the maximum vertical shift will limit the amount of horizontal shift you can apply, and vice versa.

Frame Interpolation. Frame interpolation is a technology by which a projector buffers several frames, analyzes the differences between them, and then creates intermediate frames. These intermediate frames are inserted between the "real" frames and can make motion appear smoother as well as almost completely eliminate the appearance of judder. The downside is the occasional artifact as the algorithm gets "confused," leading to some interesting visuals (for a great example of this, find a scene with a horizontal pan across vertical stripes). The other downside is what's called the "digital video effect," sometimes derogatorily called the "soap opera effect," where the overall picture looks too real. Those who dislike the effects of frame interpolation say that it induces a sense of hyper-reality, breaking your immersion in the film and making it difficult to suspend disbelief. Others enjoy the effect, saying that it looks different from 24fps film but not necessarily bad. There's no way to know which camp you'll fall into until you witness the technology in action.

The frame interpolation system on the VW85 goes by the trade name "Motionflow." It does a good job of reducing judder, though it has a slightly higher incidence of artifacts than we are used to seeing. It also appears to have more of the "digital video effect" than similar systems on other modern 1080p projectors, so home theater purists may wish to leave the system disabled.

In almost every way, the Sony BRAVIA VPL-VW85 exceeds the performance of most lower-priced 1080p projectors on the market. So it is indeed a real step up in performance that justifies its higher price. However, we would describe is as being unexceptional in its own class, since its performance is in general equal to or slightly less than competing products in its price bracket. There is no single area where the VW85 is obviously flawed. But there is no area in which it uniquely outperforms the competition either. Its shortfalls are minor, and only apparent in side by side viewing with similarly priced 1080p projectors.

User Interface. The VW85 uses a remote very much like that of the earlier HW15, with the addition of a few buttons to access some of the new features. It retains the same large size and the same bright blue backlight. In a dark theater environment, the backlight is bright enough to be annoying--especially since it is difficult to actually read the labels on the buttons when the light is shining. The backlight button itself does not light up. Some projector remotes feature a backlight button that glows in the dark; this would have been a handy feature.

Digital noise. There was a small amount of digital noise visible on the VW85, slightly more than on competing models in its class. This has the effect of "flattening" the image a little bit in certain scenes, ordinarily those which are already low-contrast. It can occasionally detract from the overall clarity of the image. There is a slight graininess to the VW85's image, separate and distinct from the normal film grain that comes from the content being displayed. Some people are hypersensitive to this artifact, but it is not a concern to most viewers.

The Sony BRAVIA VPL-VW85 is a very impressive home theater projector, designed for the cinema enthusiast who wants to put the best possible image in a light-controlled environment. Despite its low 800-lumen rating, it has the brightness to drive a low-gain screen up to 160" diagonal. It has excellent color and very good contrast, giving it a solid three-dimensional look. It has some digital noise and a less-than-perfect frame interpolation system, as well as some stiff competition, so it is not the undisputed king of the $8,000 price bracket. Nevertheless, if you're looking for a high-performance home cinema projector, the VW85 is a great option.

Comments (3) Post a Comment
Will Posted Jun 26, 2010 9:50 AM PST
So this is a replacement for VW70, any word on what to expect to replace HW15?
michael Zygmunt Posted Aug 10, 2010 8:29 PM PST
I am looking for a replacement for my Sharp 8000. My dealer says this projector will not fit my needs. I have a 108 inch diagonal screen, and 13ft of distance. I also need to vertically lower the image. The Sharp has a keystone feature. What would be the "king" if I were to spend 8000-10,000 dollares for a new HD projector?
paul adams Posted Sep 6, 2010 7:52 AM PST
Hi All The Sony VW85 [like other Sony VW projectors] uses lens shift to optically "move" the image vertically. The key is to mount the projector very level in the ceiling, then use lens shift to "drop" the image. My VW85 is ceiling mounted 12 feet from a 105 inch screen and I use lens shift to "drop" the image on screen. Note: keystone is a digital feature to shift the image, but there is a quality loss. No quality loss with lens shift.