Home / It Takes a Village: Sponsors Step Up as Countdown Continues for 2022 Laser TV Showdown

It Takes a Village: Sponsors Step Up as Countdown Continues for 2022 Laser TV Showdown

We're just days away from the 2022 Laser TV Showdown being hosted by ProjectorCentral and ProjectorScreen.com. On August 4th, six independent judges recruited from the audio/video press corp will compare image quality among 14 different ultra-short throw laser TV projectors. The system built for the private event allows the simultaneous viewing of up to eight test projectors on matching 100-inch screens, plus a 100-inch image from a reference projector. 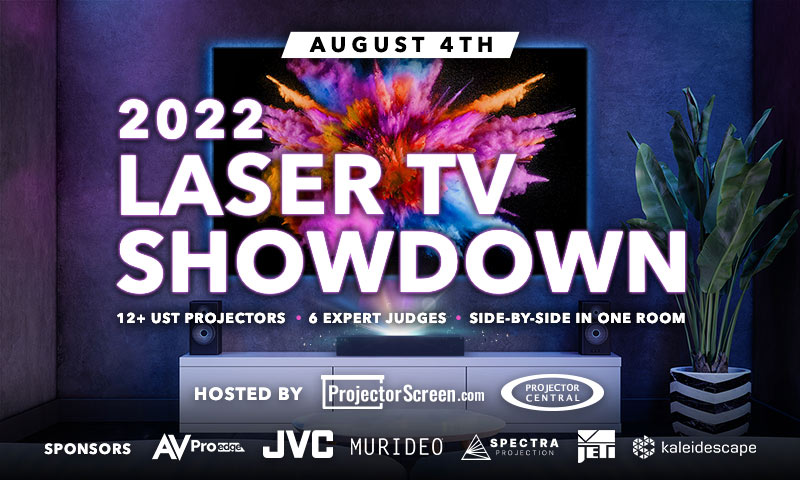 ProjectorCentral is fully overseeing the testing and scoring of the projectors to ensure the integrity of the results, and ProjectorScreen.com has provided projector samples from its online retail operation as well as the 1,400 square-foot test facility. We have accepted no sponsorship dollars for the event. However, setting up nine screens and the electronics to distribute full-bandwidth 4K HDR signals to nine calibrated projectors presents challenges, and multiple sponsors have graciously stepped up to provide the gear to make it all happen. Frankly, I've been blown away with both the quality of the equipment and support they've offered. It's worth describing what we're using and why.

Jeti. For several weeks now, our event calibrator Dave Harper has been tuning the projectors to look their best. Most calibrators and reviewers work with the highly-regarded Calman calibration software, and we remain grateful to Portrait Displays for their steady support of the editorial community. But a calibration is only as good as the light meter you connect to the software, and the most accurate measurements are taken with a spectroradiometer. These are expensive instruments and only the most sensitive spectros—those with an optical bandwidth of 5 nanometers or less—are said to provide the best accuracy for laser projectors like the ones in our Showdown. Jeti, based out of Germany, provided us with their Spectraval 1511 HiRes. With its narrow 2 nm bandwidth it's well within the desired tolerance, and in conjunction with a zippy Klein K-10A colorimeter that can be modeled on the Jeti for each projector, makes for time-efficient calibration. Along with its high accuracy, the 1511 is a super-slick little box with an easy-to-use touchscreen interface and gorgeous display for when you just want to point and shoot it. 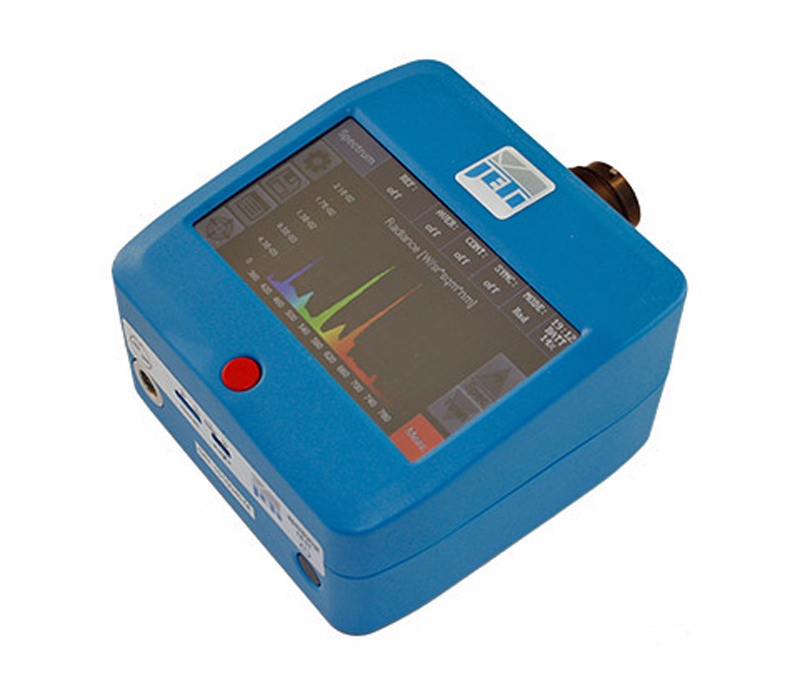 AV Pro Edge/Murideo. Simply put, AV Pro Edge and its sister company Murideo, both out of Sioux Falls, SD, produce some of the best thought-out and engineered signal distribution and generation equipment you can find. The stuff just works when you plug it in, and when it doesn't—typically due to some dreaded HDMI conflict among your components—there's usually some facility to fix it. The company sent us a veritable treasure trove of gear; the image below doesn't even show everything that came in the box. 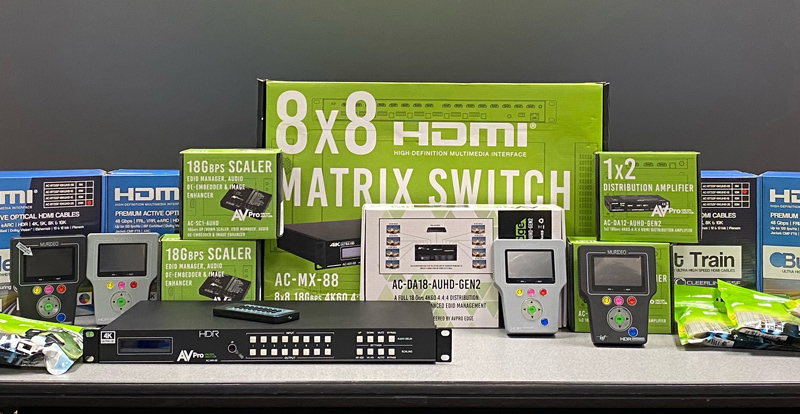 To begin, we got a couple of Murideo MU-SIX-PAIR kits consisting of a Six-G 4K Gen 2 HDR signal generator and a Six-A 4K HDR HDMI Analyzer. The SIX-G is the preferred video pattern generator for many calibrators and reviewers including yours truly; with its built-in display you can cycle independently through a wide range of revealing test patterns or hook it up to Calman for automated workflows. Add in the SIX-A analyzer, and you can troubleshoot most HDMI connection and EDID issues, even intermittent problems that only occur randomly. We're using the SIX-G to help generate patterns for the Showdown evaluations as well as for calibrations.

At the heart of our signal distribution system are two key components: An AC-MX-88 8x8 matrix switch and AC-DA18 AUHD Gen 2 1x8 distribution amplifer. Both are rated for full bandwidth 18 Gbps HDR signals. The matrix switch can accept up to eight signal sources and route them indepdendently if needed to eight different displays. In our case, we're using the switch to alternate between a Kaliedescape movie player, an Oppo UDP-203 UHD Blu-ray player, a Roku Ultimate UHD streamer, a Direct TV web-streaming set-top box, and a Murideo SIX-G generator. Despite some initial conflicts among our projector groupings, the HDMI EDID management in the matrix switch made it easy to "copy" the EDID from one of the working projectors and apply it to all the outputs. Problem solved. An AC-DA12-AUHD Gen 2 HDMI 1x2 splitter, also with its own EDID management, was placed in the line after the switch and prior to the distribution amp to feed our reference projector.

All of our HDMI cables are Bullet Train from AV Pro Edge, including active Clearline SSF optical cables that require no external power source in 20 and 10 meter lengths and passive copper HDMI cables for source interconnects. All the cables are rated to 48 Gbps.

Kaleidescape. I'm not sure there's anything I can add about Kaleidescape's award-winning movie servers that hasn't already been said so many times in so many publications, but suffice to say that if there were ever a single aspirational product that all movie and home theater lovers want for their system, this is it. K-scape's signature cover-art user interface has only gotten easier and more engaging through the years, and the company's download movie store has grown into a massive library of just about anything you'd want to watch, including quite a few flicks that you simply can't find anymore on disc. 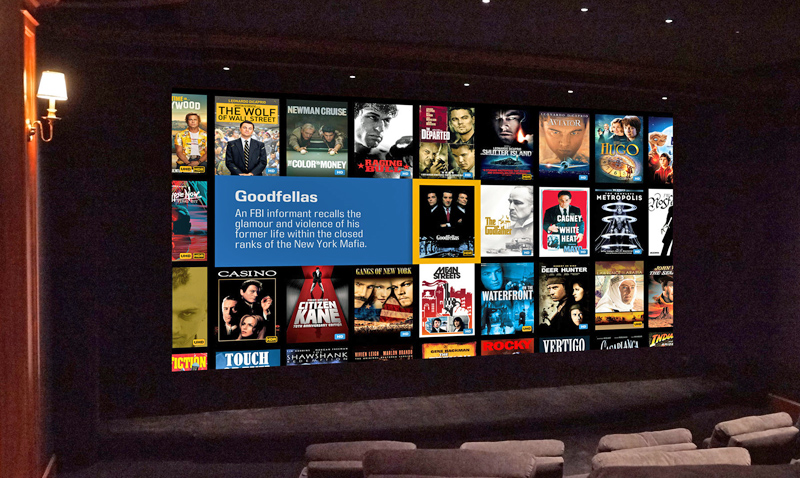 But the Kaleidescape players have some specific qualities that make them very desirable for an event like ours. In the first place, the downloaded titles deliver just about the highest bitrate you can get, and therefore the best quality and least-compressed digital video signal. 4K movies stream at up to 100 megabits per second, which is competitive with the very best UHD Blu-ray transfers and five to six times faster than web-streamed movies. Content plays pretty much instantly, and you can create customized scripts to present specific movie clips in any order, which is awesome for making highlight reels for our evaluations. Kaliedescape was kind enough to volunteer the use of a player and loaded it with additional titles we wanted for our tests.

JVC. Looking at up to eight projectors simultaneously may tell you which one you like best, but it won't tell which one is right. So we reached out to JVC and they graciously stepped up with a sample of their DLA-NZ8, the middle model in their line of laser projectors. At $15,999 it costs more than twice what the most expensive UST Laser TV in our Showdown goes for, but that's the point. While evaluating our test projectors the judges will be able to peek through an archway into a dark adjoining room and see what a current, state-of-the-art LCoS-based projector is doing with the same content. The NZ8, which we recently reviewed at ProjectorCentral, delivers uber-deep blacks and superb HDR handling from JVC's Frame Adaptive dynamic tone-mapping and makes an excellent reference. Our calibrated sample will be projected onto a Stewart Filmscreen reference quality 1.3 gain screen. 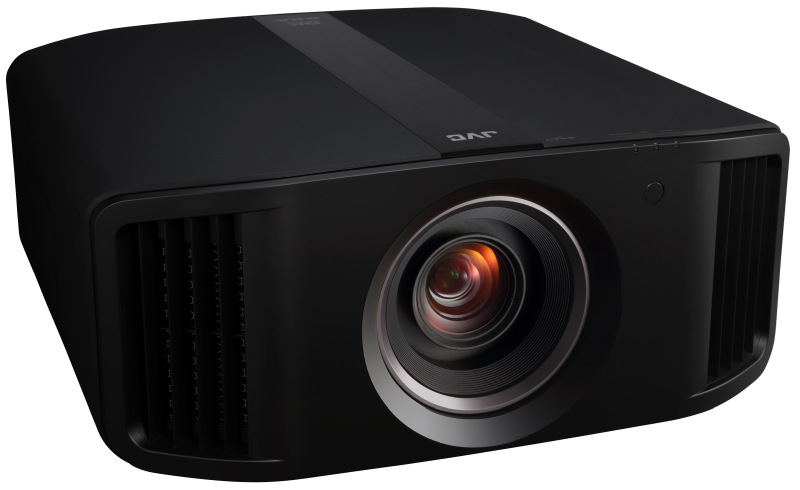 Spectra Projection. Ultra-short throw laser TV projectors absolutely require a good ambient-light-rejecting screen to look their best whether you are watching in light or dark conditions. The best choice is usually a lenticular screen with reflective ridges that aggressively reject overhead light while directing the light from the projector out to viewers, improving picture quality while preventing image splash onto the ceiling. They typically offer a gray, negative-gain material, which sacrifices some peak brightness but vastly enhances contrast and deepens blacks.

Spectra Projection's Vantage 100 with UST 0.5 material was a great choice for the Showdown, offering a rated 0.5 gain that compares favorably to the best-performing UST ceiling-light-rejecting screens. It also comes with a very solid frame, a thin velvet bezel to help absorb any image bleed, and a rare height adjustment to help level it out once it's up on the wall. This is the high-quality, high-value house screen at ProjectorScreen.com, and we're using eight of them on rolling racks for our test subjects.

We're incredibly grateful to all of our sponsors for their contribution to the 2022 Laser TV Showdown, and we look forward to sharing our results with all of you later this week.