The world is well-populated these days by drop-in workspace centers that provide folks with temporary offices and conference rooms. Often, along with the communal office facilities they'll have a little refreshment center or kitchen where you can pour yourself a cup of coffee and a sitting area where you can chill, but that may be the extent of it. Then, there's COhatch, a growing chain that serves the Ohio metro areas of Columbus, Cincinnati, and Cleveland, as well as Indianapolis. 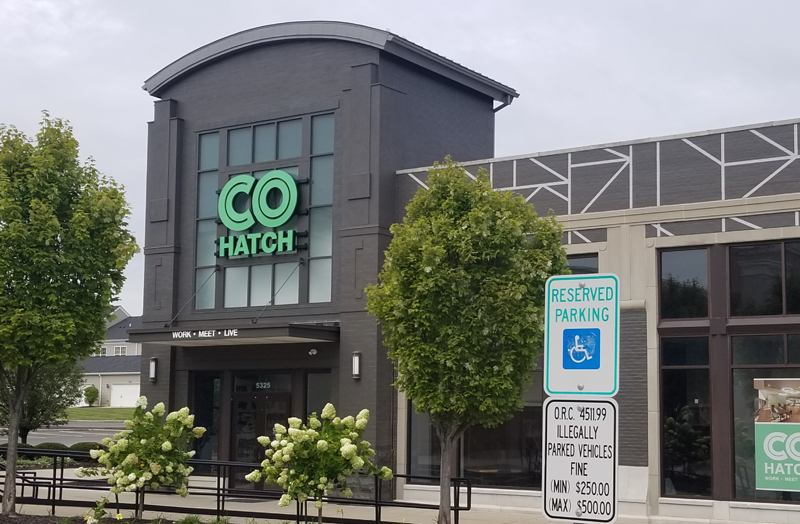 COhatch co-founder and CEO Matt Davis does a nice job of articulating the company's vision in this YouTube video, but suffice to say that the mission is not just to make available cookie cutter office rooms and meeting spaces, but to build unique environments that will not only creatively inspire people in their work lives but also allow them to integrate their personal lives as well. To that end, COhatch centers are a unique combination of a traditional office, attractive spaces to socialize and relax, and, well, funhouse. Various facilities might offer amenities like a coffee or brew bar, a room with arcade games, a giant suspended cargo net to play on, a fully-equipped podcast room, or even a home theater. The idea is that you can just as easily conduct business and incubate ideas with your fellow Hatch-mates on Friday and throw your kid's birthday party or entertain clients on Saturday, all in the same community-focused environment. The company motto is "Work, Meet, Live."

The theater profiled here, created for the COhatch in the Cincinnati suburb of Mason, wasn't the first in a COhatch center, but is the largest and most ambitious to date. Andres Sauceda, an engineer and system designer at Hanson Audio Video out of Dayton and Cincinnati, had been using one of the Columbus locations for coffee-shop visits with clients and Zoom meetings, and got to know the COhatch management team. That eventually led to this theater in the basement of the Mason facility that seats 18 total—12 in recliners and another six at two high-top bars at the back. Davis asked his interior design team and Hanson to create a state-of-the-art bigscreen theater where he could watch Star Wars movies. The theater, which can be used by COhatch members for presentations during the day or entertaining at night, was originally envisioned by COhatch interior design staff to have a dark, minimalist look. But when the team saw the starkness of the space, the creative wheels started turning, and a well-known local mural artist was hired for the Star Wars inspired walls—including the warp-speed lines that extend onto the stage floor and ceiling to create a sense of dimensionality and depth.

Unlike with a typical home theater, the projection system had to accommodate both a dark-room movie night as well as lights-on business presentations. That called for high brightness, which ruled out some well-regarded 4K projectors that lacked the juice, while budget constraints eliminated some powerful high-end commercial 4K models. The perfect solution proved to be an Epson Pro L1070U, which is a 7,000-lumen native WUXGA (1920x1200) 3LCD projector that uses Epson's 4K Enhancement pixel-shift technology to simulate a 4K image on the screen.

Once the projector and its standard zoom lens were selected, finding the right screen proved to be one of the unusual challenges facing the installation. With a nearly 200-inch diagonal image in mind, the setup called for a screen with a wide viewing angle, some degree of ambient-light rejection for presentations, acoustic transparency, and—just as critically—no moirÃ© artifacts that could be introduced by the combination of the acoustic perforations and the Epson's pixel-shifting.

The Hanson team originally spec'd a screen from another well-known supplier, but the company couldn't guarantee the image would be moirÃ©-free. That's where Stewart Filmscreen stepped in. Stewart worked with Sauceda to zero in on a 193-inch diagonal FireHawk LS, which is the extended-size version of Stewart's 5th-generation (G5) classic ambient light rejecting gray material. Then, their local rep picked up the Epson projector and shipped it to the company's plant in California, where they could test it against the material and even adjust the perforation spacing if needed before manufacturing the screen, thus guaranteeing in advance that moirÃ© would not be a problem. The final product, with Stewart's MicroPerf X2 THX Ultra perforation process and a narrow-bezel, tapered BalÃ³n Edge frame with an LED backlight kit, makes for a stunning image that meets all the viewing requirements while also retaining good color accuracy and keeping the image free of hotspotting.

The theater's audio system is no less impressive, featuring Anthem electronics and top-line Paradigm in-wall speakers behind the screen and around the theater to creative an immersive 5.4.2-channel Dolby Atmos soundfield with four subs and two overhead effects speakers. Sources include a Sony UBP-X1000ES UHD Blu-ray player, Apple TV 4K and Roku Ultra 4K streamers, and a TiVo Bolt set-top box for broadcast TV. The equipment rack is located in a closet at the back of the room, and an Atlona video switcher with Atlona port boxes inside the theater allow users to connect and view laptops or media for presentations. The whole room is easily operated with a Control4 automation system with iPad touchscreen and handheld remote interfaces.

To say that the theater has been a success would be understatement. Although it enjoys mixed use, it gets tapped most frequently—probably 80% of the time—for entertainment. And here's the best part of the story: after opening last year in the midst of the pandemic, the Mason theater proved to be a popular safe haven for friends and family who could not otherwise gather to watch movies in a bigscreen theater. That's the perfect result for a company whose cofounder Davis says, "We really want to integrate your life inside of our spaces."