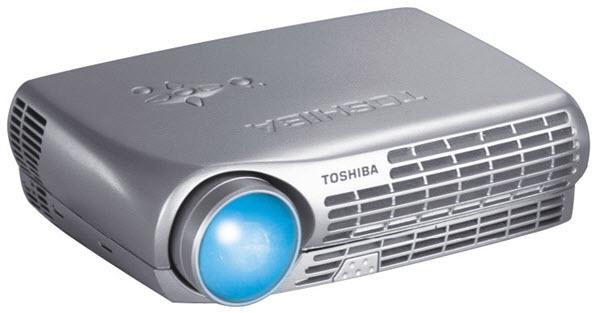 Toshiba's offering in the ultra-portable form factor is the 2.4-pound TDP-P5 projector, a richly featured user-friendly projector that packs a lot of functionality into a very small and stylish package. Measuring only 2.6 x 6.0 x 8.3 inches, this small powerhouse is targeted at the mobile presenter who needs excellent performance in a sleek package that fits easily into a briefcase or handbag.

The TDP-P5 competes with 5 other projectors in the highly mobile class of 3 pounds or less. As of this writing our database showed 18 projectors in that category, but 13 of them are the same as the other 5 projectors and being sold under other names. This is a good thing for consumers. Choices of like things give you more options on where to buy and generally better pricing.

As of this writing, mobile projectors less than 4 pounds are all DLP based due to the inheritantly smaller and lighter design of single display DLP projectors versus 3 LCD display projectors. For some commentary on the merits of one technology versus another, check out LCD versus DLP.

The unit comes with a nice remote control, carrying case, User's Manual, Reference Card, and cables for audio, data, mouse control, S-video and composite video. The projector was easy to set up with its manual zoom and focus and produced an excellent picture with the factory settings. Throw distances are from 5.0 to 32.8 feet allowing a maximum diagonal screen size of 266 inches. At a typical viewing distance of 10 feet the diagonal image size ranges from 65 inches to 82 inches. The picture was crisp with good color saturation and contrast, with minimal fan noise (rated at 32dB) and produced the clean pixel-less image expected of DLP projectors.

Because of its size, the P5 has only 4 connectors and power. The audio connection uses a mini-stereo connector. For video an S-video and composite connector are provided; however, as seems to be the case with nearly all manufacturers, the composite cable is included and the S-video is not. Strangely the manufacturers do themselves a disservice by choosing to supply the cable for the lesser quality video source. Presumably this is because composite is more widely supported on old and new video devices, but if you have an S-video source, get the S-video cable. You'll get a better image. Finally, the data connection uses a M1-DA (P&D) connector that is common on InFocus products. The data cable includes a USB pigtail for easy connection of data and mouse to your notebook computer.

The P5 remote control is not your typical credit card type remote often found on mobile projectors. This remote fits comfortably in the hand and has some very nice features including a trackball mouse with left and right click and a laser pointer; two things that all presenters would appreciate.

It includes the usual buttons for power on/off, computer and video selection, volume control, and menu. The unit also has a programmable button called Effects, which we discuss later under Features. Something not usually found on a remote control is a power switch that turns the remote on or off. This is to protect the battery from a power drain due to accidental activation of the laser pointer when traveling.

The projector has front and rear I/R receivers that allow the remote control to operate well when pointed at the projector from a range of up to 20 feet; however, it had marginal performance when trying to bounce the I/R off the screen unless we were within in a few feet of the screen.

As a final note on the remote control, we would have preferred to have the menu button on the last row of buttons nearest the trackball to improve the transition from menu to trackball and back to menu.

The P5 offers a number of features that are selectable from the Remote Control.

The menu is easily controlled using the trackball and includes the usual controls for Contrast, Brightness, Color, Setup and Keystone Correction. Another nice feature was the ability to capture a logo for display instead of a blue or black screen when there is no source detected. It's a nice way to put your company name in front of your audience before and after the presentation. This was quickly and easily accomplished with on-screen instructions.

When viewing a DVD with composite video we found a need to adjust color temperature and although the manual indicated a choice of 4 color temperatures (5200, 6500, 7300, 9300), the menu offered only a choice of "presentation" or "film." Changing the selection to "film" did improve the image by warming the skin tones and toning down the greens.

There was also an "Application" menu item that offered choices of "normal", "film" and "presentation." The effects of the various selections were not obvious and again the choices did not match those in the manual.

The lamp warranty is 90 days. The projector warranty is 2 years and can be extended to 3 and 4 years for an additional fee.

The P5 is an impressive package and a welcome relief if you're doing a lot of road shows. It is easy to set up and use. Menus are intuitive, although we found some incompleteness, and the remote is very functional. Many nice features have been provided with the mobile presenter in mind. The light weight and small package makes it easy to transport using the carrying case provided or packing it into luggage, a briefcase, or a tote bag.

The P5 delivered bright, high contrast quality images in video and data making it ideal for business and pleasure. The projector does not support HDTV, but if the connectivity suits your needs and the price is within your reach, it is an excellent mobile solution.

For more detailed specifications and connections, check out our Toshiba TDP-P5-US projector page.