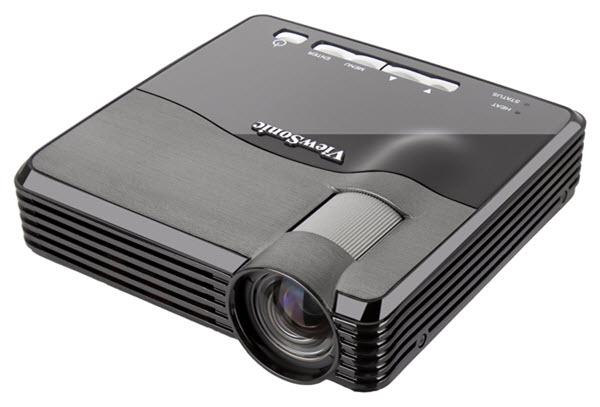 The line between a mini-projector and a pico-projector is already blurry, and ViewSonic's PLED-W200 makes it fuzzier. Most mini-projectors weigh more than a pound and have rated outputs of over 200 lumens. The PLED-W200 weighs less than a pound and puts up 250 lumens. Few pico projectors offer the PLED-W200's 1280x800 (WXGA) native resolution, but many of them also support for SD cards. So, the PLED-W200 is an intriguing mix of both pico- and mini- characteristics, but we'll take ViewSonic's lead and call it a pico projector.

The PLED-W200 is a great personal projector. It works well in hotel rooms for movie viewing with something larger than a TV image, and it covers quick hallway meetings where a small, bright image will suffice. It even sports dual 2-watt speakers which is unusual for a projector whose footprint is only 5"x5". At a street price of $555, the PLED-W200 is shipped with an individual carrying case and a slightly larger zippered pouch for holding the projector and its accessories.

The PLED-W200's custom input connector accepts a supplied snap-in cable adapter. The 3-foot VGA cable has a male connector, so you either have to plug it directly into your computer or use a male-to-female VGA cable, not the more common male-to-male, to extend the run. In either case, you have to be careful that the weight of the cables does not tilt the projector, and it is easy to accidentally bump the projector when moving near it or a computer connected to it. You may also need to tweak image settings to get the quality you want because none of the presets hit the mark. Still, even with those precautions, this is a nice step up from traditional pico projectors.

The first thing that hits you when you unpack the PLED-W200 is its clean look. There are no traditional connectors or power plug receptacles staring at you because it has a specialized input adapter. That could be a problem if you misplace or damage it because you have no way to connect to the projector without the adapter. The layout of the control panel and the remote control is simple and easy to understand.

Another pleasant surprise is the low noise factor. Projectors in the 250-lumen range generally need fans to exhaust heat, and small fans can emit irritatingly high-pitched noise. The PLED-W200 has low-pitched fan noise which does not offer much of a distraction even in a small room.

As with most picos, image size and brightness is a trade-off. For the PLED-W200, image diagonals of less than five feet have enough brightness to avoid washout in modestly lit rooms. This is not the projector for an airy living room bathed in afternoon sun. But if you are relaxing in your hotel room after a busy day, a PLED-W200-projected movie in your room looks good.

Data images are clean and well focused from edge-to-edge, but video images lack much pop due to low contrast and color saturation. On a bright note, the PLED-W200 is almost completely free of the rainbow artifacts that plague most DLP projectors. Also, its WXGA native mode maps 720p widescreen video nicely.

LED-based illumination systems can have some color balance issues, and the PLED-W200 is no exception. None of the presets hit the sweet spot, so you will have to engage User mode to get the image to look natural. Fortunately, the PLED-W200 offers two User settings, so even if the projector is shared, you can retain your favorite settings.

The PLED-W200 is definitely a personal projector since 250 lumens will not handle most daylight room brightness, but it does have enough brightness to extend its usefulness beyond most pico projectors. It will not slip into your shirt pocket, but it does fit easily into your briefcase or backpack. You will need to find an AC outlet to use it, but that is a small inconvenience for what is a notable improvement over the pico projector.

SD Card. The PLED-W200's SD card features are surprisingly extensive. Not only can the usual audio and video content be accommodated, but with proper file conversion (software supplied), even certain Microsoft Word, Excel, and PowerPoint files can be displayed. Not all application features are supported, but basic presentations are a snap.

Menu Selection and Navigation. ViewSonic has done a nice job with the PLED-W200 menu system. Menus are clearly defined, and layering is kept to a minimum. Navigation is easy, and when re-opening the menu system, you return to the last-used menu. That is really convenient when making repetitive adjustments to a particular setting.

Dual User Modes. It is not uncommon to have one User mode in an inexpensive projector, but the PLED-W200 goes one better. This is handy if the projector is a shared resource because two users can store their preferred image settings and avoid re-tuning each time the projector passes to the other user.

Audio Output.It is rare to find more than a single 1-watt speaker in a pico projector, but the PLED-W200 has dual 2-watt speakers. Make no mistake . . . 4 watts is not going to fill the room with sound, but for intimate settings, it is sufficient to overcome ambient noises that might otherwise be distracting.

Remote Control.Since it is the size of a credit card, the PLED-W200's remote control is easy to misplace and may accidentally slip away in someone's pocket. That would be a shame since its one of the better-configured remotes we have seen. Every button is clearly labeled, and many one-touch functions are available. Examples include aspect ratio, color mode, and direct source selection. One minor issue is that the remote sensor is on the rear of the PLED-W200, so you have to be behind the projector to use the remote.

Connectivity.The input adapter cable has a male VGA connector as well as a set of RCA composite audio/video connectors. There is a USB Type B connector on the chassis for a computer connection in lieu of a bulkier VGA cable, but you will have to purchase an additional cable to make the connection.

Warranty.ViewSonic warrants the PLED-W200 for three years and its LED illumination system for one year. The LED is rated at 20,000 hours, but the one-year warranty will expire long before that.

Maintenance. The PLED-W200 has no air filter to change, so maintenance consists of vacuuming the side grills every now and then to avoid any dust accumulation that might impede airflow. There is no lamp to replace, and that will save a few coins as long as the LEDs hold up for their rated life.

Brightness and Uniformity. In its brightest mode at 200 lumens, our test unit did not quite reach its rating of 250 lumens. However, it showed no hot spots and its brightness uniformity was excellent at 89%. Preset mode brightness readings were: PC - 125 lumens, Movie - 100 lumens, and ViewMatch - 115 lumens. Since lamp life is not an issue for a LED-based projector, the PLED-W200 has no Eco setting.

Lamp Life. The LED light source is rated to last for 20,000 hours. That is about seven years of continuous 8-hour-per-day usage, so the PLED-W200 will probably be relegated to a closet shelf long before the LEDs wink out.

Image Size and Offset. The PLED-W200 sets up nicely for tabletop placement. The bottom of the image is at lens centerline height, and that puts the center of the image at eye level. A six-foot diagonal can be projected from six feet away, so even a confined space can accommodate a good-sized image.

Placement Flexibility. Like all pico projectors, the PLED-W200 has a fixed focal length lens. That can limit your placement options because a particular image size requires a specific projection distance. However, the throw ratio does allow relatively large images with short projection distances, so you may not find the lack of a zoom lens problematic.

Image Color Bias.Low cost LED illumination systems often fall short of mercury vapor lamps when it comes to color uniformity. With the PLED-W200, you will see this effect on a white screen in the form of slight blue-green tint in the left half of the image. This may be a slight distraction in data presentations, but in video presentations it is not noticeable.

Presets. The PLED-W200's four preset modes (Brightest, PC, Movie, and ViewMatch) are not particularly effective. For example, flesh tones are off in Movie mode, and Brightest mode has more than the usual green overtones. ViewMatch gave the most pleasing video rendering, but to really achieve the best images, you will have to resort to the image settings available in the two User modes. In general, lowering brightness and saturation while raising contrast will produce the best results.

ViewSonic has broken new ground with the PLED-W200. It is neither a pico nor a mini but shares both characteristics. It is small, light, and versatile, and it is priced competitively for a WXGA projector. Its video performance will not compete with larger projectors, but for a 250-lumen projector, it does a good job for personal viewing and for small gatherings.

For more detailed specifications and connections, check out our ViewSonic PLED-W200 projector page.

Comments (1) Post a Comment
Dr.Habes Posted Oct 4, 2015 2:38 PM PST
I have View Sonic PLED_-W200 Pocket Projector , but from three months, the Projector has been increasing its temperature during 3-5 minutes after switching on and shut down and sometimes shows a message (the files are corrupted)....please advice me to resolve this problem.