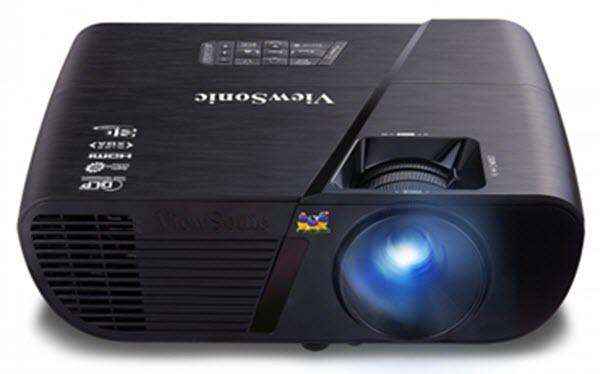 With 1920x1080 as the established standard for home theater projectors, it is easy to overlook the vast improvements being made in less expensive, lower resolution products. But there is a lot of exciting action in the sub-$500 price category. If you want a great picture on a low budget, you need to look no further than the new Viewsonic PJD5555W.

Firing up this small portable projector is a treat. The first thing you notice is the low fan noise, then the bright picture. Once you open the menu and flip through the color mode options, it becomes quite obvious that Viewmatch and Movie modes deliver solid color balance and very good contrast right out of the box-no fiddling with the picture controls is required. The native resolution on this projector is 1280x800, not the standard 1920x1080 you get on more expensive home theater projectors. But the picture is quite smooth and well-integrated with no visible pixelation from any normal viewing distance. Details such as hair and fabric are remarkably sharp and well-defined despite its lower resolution. If you want an inexpensive projector that performs exceedingly well with no calibration or muss and fuss required, this is it.

5000 hour lamp, 8000 hours in eco-mode. Many are attracted to new models using LED and/or laser light sources due to their claims of 20,000 hours of life and up. Nobody wants to pay up to $300 for a replacement lamp (the price of a replacement lamp on this projector is $265). This was a bigger deal when lamps only lasted 1500 to 2000 hours. But many of the current high pressure lamps get much longer life. And the cheaper LED/laser projectors often suffer from either dim pictures, poor color balance, high fan noise, or the likelihood that other components in the light engine will fail far sooner than the light source itself, rendering the claim of 20,000 hours of life moot.

Excellent remote layout and response. This remote feels good and solid in the hand, the buttons have superb tactile response, and the projector see the IR bounce from a screen twenty feet away.

Extensive keystone adjustment. The PJD5555W has plus and minus vertical keystone adjustments up to 40 degrees, which is far beyond the range you'd actually want to use it. Since there is no lens shift (no projector in this price class has lens shift), the keystone performance becomes more of an issue. On more expensive home theater projectors with native 1920x1080 resolution, many users prefer not to engage keystone adjustments at all, because it eliminates the one-to-one pixel match between a 1080p source and the native resolution of the projector. But on a 1280x800 projector like this one, all 1080p material is compressed anyway, so deploying a keystone adjustment makes no visible difference in image acuity. We would still recommend using it only modestly, as an aggressive use of keystone will cut light output of the projector.

Light weight and portable. While not designed to be a compact portable for frequent travelers, the PJD5555W is lighter than it looks, under 5 lbs. The larger form factor of the casework assists in keeping fan noise to a minimum, so there is real benefit to its size/weight ratio.

Brightness. Our test sample measured 3038 lumens in its brightest pre-programmed color mode, conveniently called "Brightest." So it is pretty much on target with its rating of 3200 lumens. Other color modes include Dynamic (2850 lumens), Standard (about 2500 lumens), and Viewmatch and Movie (about 2400 lumens each).

Lamp power options: There are two settings, Normal and Economic. Normal is full power, and Economic reduces light output by a nominal 18%.

Fan noise. Audible noise is surprisingly low for a small portable projector of this brightness. In normal lamp mode it is a low pitched whirring sound that would only be noticeable during a quiet interlude in a movie if you were seated within a few feet of the projector. In economic lamp mode, it drops to a softer whisper.

The best color modes for movie viewing are Viewmatch and Movie. Color balance is quite solid in these modes, and there is no practical reason to worry about further calibrations. This is the most impressive factory default color performance that we've seen in a projector in this price range.

Input lag. Our Bodnar meter indicates a lag of 33 ms, which is about two frames at 60 fps. This is typical for inexpensive DLP projectors and plenty fast for most gaming. We do not know of any projectors under $500 that are any faster than this, but if you want to spend more you can find models with input lag under 20 ms.

Rainbow artifacts. The most annoying flaw in DLP technology is its tendency to produce rainbow artifacts-occasional momentary flashes of red, green, and blue that last no more than the blink of an eye. Some people never see them, some see them so infrequently that they are not a problem, and some see them frequently enough that they become a distraction. If you see them, they are generally more of an annoyance in movies, video and gaming, and not so much business presentation. But they tend to appear on almost all inexpensive DLP projectors, and the PJD5555W is no exception. In this price range, if rainbow artifacts are bothersome to you, your best option is to go with an LCD projector. Unfortunately, we don't know of an LCD projector under $500 that puts out a better picture than the PJD5555W.

Almost no zoom range. A zoom lens with 1.1x range means limited placement flexibility. To fill a 100" diagonal screen you must set the projector 11 feet from the screen, plus or minus 6 inches. This gives you a slight bit of leeway to fit the projected image to a screen without having to place the projector at an exact distance, so it is better than no zoom at all. But most projectors have at least a 1.2x zoom range.

Fixed Throw Angle. The centerline of the lens on the PJD5555W intersects with the bottom edge of the projected image. That means it is relatively well set up for an inverted ceiling mount, but it would be more problematic to put it on a rear shelf above the heads of the viewers. In most of those cases you'd need to tilt the projector downward to hit the screen, and engage keystone correction to square it up. The keystone correction works fine, but aggressive use of any keystone feature will reduce a projector's light output since it is turning off part of the image device.

16:10 Aspect Ratio. Though 1280x800 resolution is a de facto standard, keep in mind that it is 16:10 aspect ratio, not the conventional HD 16:9. So when projecting a full screen image of a 16:9 movie there will be small black bars at the top and bottom of the screen. These will be about 5% of the picture height. So for example on a 100" diagonal screen the black bars would be about 2.5 inches. If you prefer, you can get rid of them by filling your 16:9 screen vertically. That will cause you to lose a couple inches off the right and left edges of the picture.

Flimsy focus and zoom controls. The PJD5555W is an inexpensive projector, and the flimsy focus ring and zoom adjustment ring serve as reminders of that. Moreover, they tend to interact to the point where it is difficult to tell which ring is which. Once you set it up on a shelf or ceiling mount and get it adjusted properly, you won't need to touch these again. But if you are using it in a portable application, the flimsy focus control can be a minor nuisance. Over all it is not a big deal, but it is a noticeable flaw in an otherwise solidly designed projector.

The Viewsonic PJD5555W can be found for under $500 without too much shopping around. And it that is the top end of your budget range you will be hard pressed to find a projector with a better image for that money. However, as noted previously, the DLP rainbow artifacts may be a problem depending upon how sensitive you are to them.

If this is a concern of yours, you can take a large step toward eliminating that problem by stepping up to the BenQ 1070, an excellent entry level home theater projector which is now selling for under $700. The 1070 has two primary advantages over the PJD5555W. One is it is native 1920x1080 resolution, so you will get an incremental boost in detail definition. The other is that it has a faster color wheel, so the color refresh rate is much higher. This translates to a lot fewer rainbow artifacts.

And, as of this writing there are two professional projector resellers offering the BenQ 1070 at competitive prices, ProjectorPeople and Visual Apex. The advantage of dealing with these folks rather than Amazon is that they have knowledgeable staff available to speak with you by phone. They can also set you up with whatever accessories you might need--HDMI cables, screens, ceiling mounts, etc. And, buying from these folks helps support ProjectorCentral, which we always appreciate. See links to their listings for the BenQ 1070.

The Viewsonic PJD5555W puts out a truly bright, beautiful picture for under $500. For optimal video/movie viewing in ambient light (where color saturation and contrast are already compromised), it can be used with BrilliantColor set to maximum for an output of 2400 lumens. In a dark room you can turn BrilliantColor off and reduce brightness to a still ample 1000 lumens, and thereby maximize its saturation and contrast.

Its only flaw is the DLP rainbow artifacts that are the Achilles Heel of just about every DLP projector in this price range. But the color and contrast are so solid that it almost begs one to live with a few rainbows in order to get the benefits of the otherwise impressive picture. Some people are not bothered at all by rainbows and never even see them. Others find them a real problem. You won't know whether they are an issue for you until you spend some time viewing a DLP projector. One solution is this: buy the Viewsonic PJD5555W from a reseller who offers a refund if you are not satisfied. That way you can road test it and see for yourself whether your particular sensitivity to rainbow artifacts impairs the enjoyment of the otherwise terrific picture.

For more detailed specifications and connections, check out our ViewSonic PJD5555w projector page.