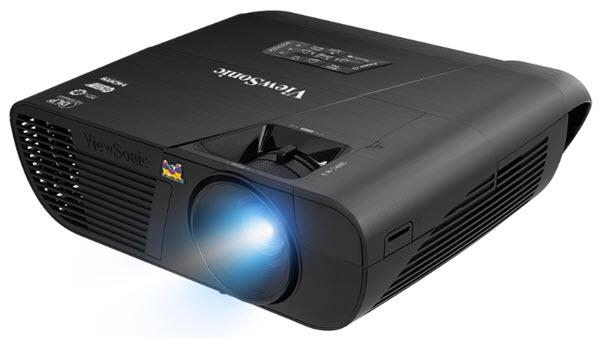 If you like the idea of wireless presentations using a local area network, then ViewSonic has something interesting for you in their new 3300-lumen ViewSonic LightStream PJD6350 XGA projector. With an official price of $679, the PJD6350 is not the least expensive XGA projector you can buy, but it comes with a lot of features not found in its class. For example, it sports a 10-watt speaker that can fill a medium-sized room with sound where all of its competitors offer just a 2-watt speaker. It also offers optional interconnect capability with IOS and Android handheld devices along with the usual PC and Mac inputs. Of particular interest is what ViewSonic calls its Port All compartment that serves as either the plug-in location for their optional ViewSync WPG-300 wireless dongle or for a second wired HDMI input.

All this capability comes at the cost of slightly more size and weight than most of its competitors, but as an offset to those limitations, the PJD6350 comes with a cable management cover that hides the connections to the rear panel and gives the projector a sleek look. And if that is not enough, the PJD6350 offers horizontal as well as vertical keystone, and it has corner correction for those environments where the projection surface is not perfectly flat.

The PJD6350 is an excellent data projector, and even though its native resolution is only 1024x768, it puts up a very satisfying video image thanks in part to its 20000:1 contrast ratio rating and its unusual 6-segment color wheel where yellow and cyan are emphasized over the white segments usually found in DLP-based designs.

You would expect that a new XGA projector would be pretty good at putting up data images, and the PJD6350 does not disappoint. Colors are vivid, and focus is sharp from edge-to-edge. Even 7-point type was easily readable, and vertical/horizontal keystone correction (Â±30Â° each) was effective without reducing readability. The PJD6350's brightness uniformity was excellent at 89% with absolutely no hotspots visible.

The surprisingly good video performance of the PJD6350 is more than adequate for classroom and conference room use. The native 4:3 XGA aspect ratio means you would not use it for home theater, but Viewsonic has substantially improved color performance on this class of product. In fact, after a few tweaks of the color management controls, the flesh tones and background detail of complex video scenes was as good as we have seen in much more expensive projectors. Since it is a DLP-based projector, the PJD6350 can exhibit some rainbow artifacts in certain high contrast panning scenes, but these artifacts were less evident than usual.

The heart of the PJD6350 is its wireless projection capabilities. Once the vSync software is installed on your PC, the vPresenter Pro application is available to do everything from mirroring what is on your PC's screen to grabbing cloud video or split screening between up to four computers. That same versatility is available with apps for Apple's IOS-based devices as well as Android devices. You can show your audience live camera feeds from your portable devices via the projector, and up to eight separate devices can access the projector. This is not a free option as the ViewSonic WPG-300 wireless dongle costs about $170, but if wireless presenting is where you would like to head, then the PJD6350 is ready for just about any environment you can imagine.

Unlike many inexpensive projectors, the PJD6350 has a robust 10-watt speaker that holds up from low to high volume settings without any detectable buzz or rattle. With any ambient noise in the room, a 2-watt can be drowned out in low volume scenes, but that was no problem for the PJD6350. This is one of the few low-cost projectors that has to make no apologies for its audio performance.

ViewSonic has done a nice job with its remote control and on-screen menus. Both are easy to navigate, and the remote has its keys clearly labelled and grouped by function. There is an assignable key that you may use to select a regularly used function, and there are several single function keys (e.g., Eco Mode and Color Mode) that make changing formats easy. The six menus are well laid out with little layering.

There are all the usual inputs at the rear of the projector including VGA, composite video, and S-video along with one HDMI input and both audio input and output. The Port All compartment handles either an MHL/HDMI dongle or a standard HDMI wired input. Also included are RJ-45 and RS232 connections which are LAN and Crestron RoomView Express compatible, respectively.

The PJD6350's maintenance is comparable to its competitors with both its lamp and air filter needing occasional replacement. The lamp life is rated at 5,000 hours at full brightness and a surprisingly long 10,000 hours in Eco mode. A replacement lamp (RLC-092) can be purchased for about $225. The PJD6350 is warranted for three years, and its lamp for one year. In addition, ViewSonic offers its Express Exchange service for free during the first year. Under this plan, if your projector fails for any reason, ViewSonic will ship an exchange unit to you within 48 hours of your notice of failure.

10,000 hour lamp in ecomode. This may be somewhat huge for many buyers who have been attracted to the super long life LED and laser products. The eco mode reduces lumen output by 23%, but since it is so bright to begin with, you end up with about 1800 lumens in Viewmatch mode. That is MUCH brighter than the typical LED projector, and you get a projected 10,000 hours of use out of the lamp--far more than the vast majority of users would ever sit through. Even the 5,000 hour life in full power mode is a major improvement over lamp life in years past.

Color Brightness. Many DLP projectors use white segments in their color wheel to brighten the image, but this usually comes at the cost of color accuracy and saturation. The PJD6350 reduces the color wheel's white segment size and replaces it with larger yellow and cyan segments that retain much of the original brightness while producing more accurate and vivid colors. The improvement is noticeable compared to other inexpensive DLP projectors, and hopefully other manufacturers will follow ViewSonic's lead.

Image Positioning Convenience. It is rare to find horizontal keystone correction in an inexpensive projector, but it is a feature that makes installation easier especially with unusual room configurations. In addition, the PJD6350 has a short-throw lens coupled with a 1.3:1 zoom ratio, so projector placement near the screen does not necessarily mean a small image. For example, the PJD6350 can put up a 60" image from as close as six feet from the screen. And since Eco mode only reduces brightness by about 23%, you can take advantage of Eco mode's lower fan noise in many situations.

Wireless Operation. Even though the wireless dongle needed to utilize the PJD6350's wireless capabilities is not free, $170 seems like a worthwhile investment to simplify interconnection of the many devices whose images you may wish to display. The PJD6350 will support select wireless dongles from other manufacturers in the future. ViewSonic's vPresenter Pro is easy to operate once installed, and your presentations can expand into areas that really involve your audience in ways not possible just a few years ago.

Brightness. While preparing this PJD6350 review, new specifications were issued by ViewSonic including an increase in its brightness from 3,200 to 3,300 ANSI lumens. Our test unit met that new specification almost exactly with a 3,295 lumen reading in Brightest mode. Other modes delivered the following: Dynamic - 2,515 lumens; Standard and ViewMatch - 2,335 lumens each; and Movie - 1,240 lumens. Eco lamp mode decreased brightness by about 23% while going from wide angle to full zoom resulted in an 11% reduction in brightness.

Brightness Uniformity. Uniformity was outstanding at 89% with no hot spots.

Image Size and Offset. The PJD6350 is well designed for tabletop or cart mounting. The bottom of 60" diagonal image is roughly 6" above the lens centerline.

Input Lag. Input lag measured 49 ms which is a bit longer than some of its competitors.

Fan Noise and Heat. Fan noise is quite low even in normal mode, and in Eco mode, it is almost undetectable. Heat is exhausted from the front of the projector, so there is no air flow impacting the audience.

Input Lag. Measured at 49 ms, this is a bit slower than the 33 ms we often see on inexpensive DLP projectors. This means that if fast gaming is your primary interest, this model would not be at the top of your short list.

Size and Weight. While the weight of the PJD6350 is only a few ounces more than its competitors, it is quite a bit larger. This extra volume is needed to accommodate the Port All compartment as well as the short-throw lens. The good news is that the additional volume allows for less fan noise.

Base Cost. If all you need is a bright XGA projector, there are several less expensive options. However, if the convenience of wireless presenting and the versatility of the PJD6350's wireless modes have appeal, then the PJD6350's price is in line with its capabilities.

No SD Card. For all its capability to handle external devices, the PJD6350 lacks an SD card input.

Second HDMI Connection. If the wireless dongle is not used, the Port All compartment offers a second HDMI input. However, that second HDMI cable exits the left side of the projector through a small snap out panel and is not covered by the Cable Management cover.

Whatever your appetite for wired vs. wireless presenting, one thing is certain: wireless operation extends the content you can present to your audience. With all the portable devices packed with countless photos, videos, and other data your audience might wish to see, you really need a versatile wireless projector to take full advantage. Beyond that, the color performance is top notch for a product in this price/performance class, and the 10,000 hour lamp in a still very bright ecomode is going to be a deciding factor for many buyers. The 4:3 aspect ratio is more suited to presentations than video and gaming, but the Viewsonic PJD6350 is a downright excellent choice for the money when it comes to wireless presenting.


For more detailed specifications and connections, check out our ViewSonic PJD6350 projector page.

Comments (1) Post a Comment
Nabi Posted May 19, 2015 10:42 PM PST
Take the Viewsonic lamp life projections with a grain of salt--a large one. There are at least2 ways to extend lamp life; Viewsonic seems to have chosen the most logical course: change the definition of an hour. The clever folk have invented something called the 'equivalent' hour. My experience is that, no matter what mode you're in, the counter races ahead of real time. (Sometimes even when you turn the projector on the counter has jumped ahead of where it was when you turned it off.) I'll be thankfulto get 3000 real hours, at this rate, which would likely put me at about 7000 `equivalent hours`. The reasons for buying a projector remain portability and the theatre like ambience that can be achieved. I've had 6 and all, including one with an LED (altho the jury's still out on my latest LED acquisition) have disappointed in the lamp life category.