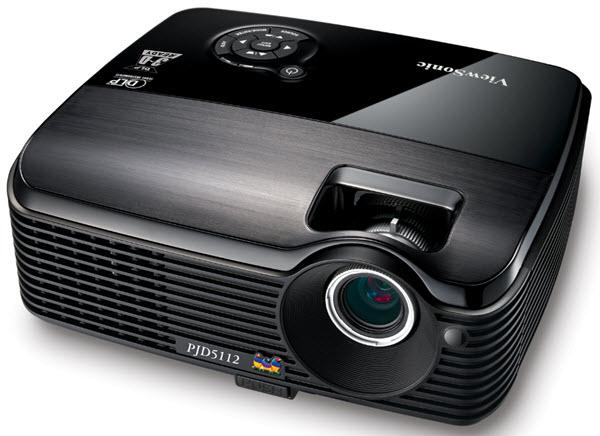 The ViewSonic PJD5112 is a DLP-based, 3D-ready, SVGA (800x600) projector rated at 2600 lumens. Because it's 3D-ready, it might seem more appropriate as a home entertainment projector for 3D games or video, but teachers and business presenters know that anything that can grab a viewer's attention is worth using. More important, it doesn't take a crystal ball to predict that if 3D succeeds at all it will quickly work its way into business and education software. That's enough to make the PJD5112 worth considering for business or classroom use.

While you're waiting for 3D software to materialize, you can use the PJD5112 as the reasonably portable (5.7 pound) projector that it is while paying no premium for it being 3D-ready. Though it is $679 direct from ViewSonic, it can be found for as little as $449 on the street. ViewSonic says it works with its distributors to arrange education discounts, which vary from one distributor to the next.

Brighter than advertised. The PJD5112 is one of the few projectors that's actually brighter than its rating. We measured it in its brightest mode at 2747 lumens, 106% of the 2600 lumen rating. It's easily bright enough to stand up to the typical level of ambient light in a classroom or office.

We measured the brightest preset mode at 2392 lumens in Eco mode -- only a 13% drop. However, the relatively low drop in brightness offers a big return in lamp life, boosting the rating from 3,000 hours in normal mode to 5,000 hours in Eco-mode. The difference makes Eco-mode well worth using, especially considering the cost of the lamp -- $279 direct from ViewSonic or $199 street. (Here again, education discounts vary from one distributor to the next.)

Good basic connectivity. The back panel of the PJD5112 offers more connectors than many portable projectors. There are two VGA ports that can both connect to either a computer or component video source, a third VGA port for monitor pass-through, S-Video and composite video ports, and stereo miniplugs for audio input and output.

A USB port will let you connect to your computer for controlling the mouse from the remote, and also update the projector's firmware. There's also an RS-232 port to let you control the projector from a computer and a 12 volt DC connector that you can use, for example, to control a retractable screen automatically when you turn the projector on and off.

Reasonably good image quality. Aside from some issues with brightness uniformity for data images and sequential breakup (aka rainbow artifacts) for video images, the PJD5112 offers reasonably good image quality for both data and video. For data images, colors are vibrant and well saturated, thanks to the Brilliant Color option. Brilliant Color has only two settings -- on and off -- and is on by default. Video images are a little lacking in contrast, but are helped by a dynamic contrast ratio feature that you can turn on manually. There's also a gamma setting that you can adjust to taste, which helped bring out detail in dark scenes in our video tests.

Security features. The PJD5112 includes both a Kensington lock and a security bar that you can wrap a cable around, although the security bar is thin enough that you might be able to cut it with pliers that include a wire cutter. You can also add a power-on password and create a customized startup screen.

Creating the startup screen is easy. Just give a menu command to capture the current image, then change the Startup Screen setting from ViewSonic to User. Creating a password by following the menu options is also easy, but it's not particularly secure. You can use only two buttons on the remote to create a 4 character password, for a total of 16 possible passwords. On the other hand, the details for which buttons you can use aren't in the manual, so having a password may still discourage a thief who's not familiar with the projector.

Power saving features. With its default settings, the PJD5112 hovers around a relatively hefty 10 watts in standby mode. We measured it with a Kill-a-Watt meter, which measures only in full watts, as wavering between 9 and 11 watts. However, you can also set the projector to Green mode, which isn't explained in the manual. ViewSonic says this shuts down the 12V DC port which drops the standby power to less than 1 watt. The Kill-a-Watt meter confirmed this with a reading of 0 watts. You can also set a timer to automatically turn off the projector if you forget to. The settings range from 1 to 60 minutes after it loses a signal.

3D-ready. The PJD5112 offers a 120 Hz maximum refresh rate, which is an essential requirement for 3D. Today's 3D technology creates the 3D effect by showing alternate frames to each eye. Since each one sees only half of the frames, a 120 Hz image effectively becomes 60 Hz for each eye. In addition, the projector has settings for both NVIDIA 3D Vision and TI 3D DLP-LINK modes. Unfortunately, we couldn't test either mode, since we're still in the process of designing appropriate tests.

Low volume. Although the PJD5112 offers reasonably good quality audio, the top volume for the 2 watt speaker is woefully inadequate even for a small conference room, as is typically the case for portable projectors. If you need audio, don't count on the projector's built-in audio system. You'll need powered speakers to plug into the audio output port or an entirely separate sound system.

Poor brightness uniformity. The brightness variance score for the PJD5112 was surprisingly poor for a full size DLP projector, at 56%. The difference is enough to be obvious on a solid white screen, and even on a screen broken up by text, as with a Microsoft Word window. With our test unit, the lower left hand corner had an obvious hot spot, which some people might not notice, but others might find distracting. However the brightness variance wasn't at all obvious with video, which tends to have much busier images to help hide the difference.

Color breakup. Single-chip DLP projectors are always subject to a potential issue of color breakup because of the way they create colors -- showing one primary color at a time, and leaving it to the eye to integrate them into the colors we see. If you move your eye, or an object moves on screen, this can create sequential breakup, aka the rainbow effect, for light areas on a dark background as each primary color falls on a different part of the retina.

May need cables. The PJD5112 comes with only a power cord and VGA cable. If you want to use any of the audio or video connections, you'll have to buy cables separately.

The PJD5112's poor brightness uniformity and tendency to show sequential breakup easily in video is potentially bothersome, but certainly not a reason to rule out the projector if you intend to use it primarily for data images. At 5.7 pounds it's reasonably portable, with more connectors than most portable projectors and more security features than many. Finally, of course, it's 3D ready, which means getting the PJD5112 will put you in position to take advantage of 3D as soon as rest of the pieces fall into place.

For more detailed specifications and connections, check out our ViewSonic PJD5112 projector page.

Comments (3) Post a Comment
ykkk Posted Apr 20, 2011 11:25 PM PST
great article can u pls tell me, can i connect iphone to ViewSonic PJD5112 SVGA DLP Projector? pls reply thank u.
Kulmansam Posted May 16, 2011 5:28 PM PST
You can purchase a cable for your iPhone on eBay under $30. The cable let's audio and video play throug, you will be able to get (yellow) video out to RCA/composite of the projector. Red & White can be plugged into sound with yet another adapter you can find on eBay.
marcio cruz Posted Apr 16, 2012 6:28 PM PST
comprei um projetor view sonic igual o modelo acima, gostaria que alguem me ajudasse, seria possivel liga-lo ao blu ray e ter o efeito 3d?

Google translation to English: I bought a view sonic projector like the model above, I would like someone to help me, it would be possible to turn it on blu ray and have the 3d effect? need some adapter or cable? seller knew anythig tell me ... what is blu ray 3d, but I turn on the projector output?