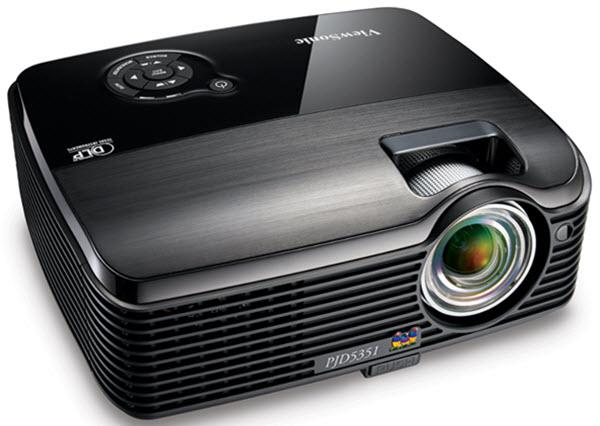 Viewsonic's PJD5351 is a short-throw XGA DLP projector. High lumen output and a short-throw lens make it a great fit for a cramped classroom, especially on a rolling cart. Filter-free design, long lamp life, and inexpensive lamp replacements make it easy to maintain. As if this were not enough to make it a great classroom projector, its sub-$800 price means that it won't break the school's budget.

High lumen output. The PJD5351 is rated at 2500 ANSI lumens. Our test unit measured 2321 lumens in its brightest mode, which is conveniently named "Brightest." This is 93% of the stated specification, and excellent performance by any metric. In a classroom where light control is difficult, a moderate-sized image is bright enough to be seen easily by all of your students. With the lights off, you can make the image even larger, which helps when accommodating larger classes.

Eco-mode, which boosts lamp hours from 3,000 to 4,000, decreases light output by 30% to 1600 lumens. In a room with the lights dimmed, this is still more than enough light to create a bright, vibrant picture.

Good brightness uniformity. Short-throw projectors occasionally have problems with low brightness uniformity, due to the extreme angle at which the light hits the screen. This is not the case on the PJD5351, which maintains 77% uniformity. There is no visible hotspotting, though 77% uniformity means that the viewer can see a brightness difference with the naked eye. As is typical with short throw projectors, the bottom third of the image is the brightest, while the top third is slightly dimmer.

Short throw lens. The PJD5351's claim to fame is its short-throw lens, which can project a 100" diagonal 4:3 image from 5' 10" away. This is not the shortest of the short-throw projectors. However, being farther from the screen helps with brightness uniformity, since the light hitting the screen is doing so at a less extreme angle. Since the projector has no zoom, you'll need to move the projector closer or farther from the screen to adjust image size.

Security. The PJD5351 has the standard attachment point for a Kensington cable lock, as well as the attachment point for an additional cable or bar lock. On a projector so well-suited to use on a rolling cart, having a double measure of physical security is reassuring. The projector also has a control panel lock, but it is not password protected and can be disabled from the control panel itself, making it largely useless. The bottom line here is that you'll have to rely on physical security, because there are no password functions on the PJD5351 that would deny use of the projector to a potential thief.

Blackboard mode. Not every classroom has a screen. The PJD5351 has blackboard mode to compensate for this. Using this setting will alter the color balance of the projected image, in order to make it appear more natural when projected on to a blackboard. It also has settings for green- and whiteboards, which are more common in newer schools.

Low cost of operation. The PJD5351 has a lamp rated for 3,000 hours of operation in normal mode and 4,000 hours in eco-mode. Replacements cost $299. There is no dust filter, resulting in an easy maintenance schedule and low total cost of ownership. One minor annoyance is that the PJD5352 has a bottom-changing lamp, so if you were to ceiling mount it, it would need to be taken down for lamp changes.

Loud speaker. The PJD5351 has a five-watt mono speaker. Using our standard test tone, the speaker produced 63dB of sound from a distance of three feet. This is fairly loud - you wouldn't want to sit right next to the projector - and should be enough sound to guarantee that all students in a normal classroom can hear what's going on.

Quiet operation. Despite its small size, the PJD5351 has a very quiet exhaust fan. Even in high lamp mode, the projector does not create a lot of fan noise during operation. In small classrooms, this can be a great benefit, as educators do not need to raise their voices to be heard over the projector.

Video performance. To be perfectly blunt, the PJD5351 is not a video projector. That said, for multi-purpose use, it does a respectable job. Yes, it lacks the HDMI port necessary to use the highest quality video signal available. However, when using a component video signal over VGA, it proves its capability. In "Cinema" mode, which produces 785 lumens, it has great contrast and good color balance. Its short-throw lens makes it a perfect companion to a video game system like the Nintendo Wii. All in all, the PJD5351 would make an excellent multi-purpose projector.

Imperfect edge-to-edge sharpness. On our test sample, the top left section of the projected image was consistently softer than the rest. If you are using the PJD5351 to display photographs, charts, or PowerPoint presentations, you can safely ignore this minor flaw. If, however, you use the projector to display highly detailed text documents or spreadsheets, you may find that content in the top left corner is difficult to read.

Poor remote. The remote control is a tiny design more at home on a mobile presentation projector. It is about the size of three or four credit cards stacked on top of one another, so it easily fits in a pocket. While this is an advantage in a mobile projector, this also means it is easy to lose in a desk drawer, drop without noticing, or steal without drawing attention.

The Viewsonic PJD5351 is a powerful little package for the classroom. Pushing 2500 lumens, this short-throw XGA projector is a perfect companion to a laptop and a rolling cart. With a low upfront cost and minimal maintenance, the PJD5351 is an affordable option for schools - and its easy portability means it can be used in multiple classrooms over the course of the day, maximizing value. With strong multi-purpose capability, the PJD5351 is a superb option for classroom use.

For more detailed specifications and connections, check out our ViewSonic PJD5351 projector page.