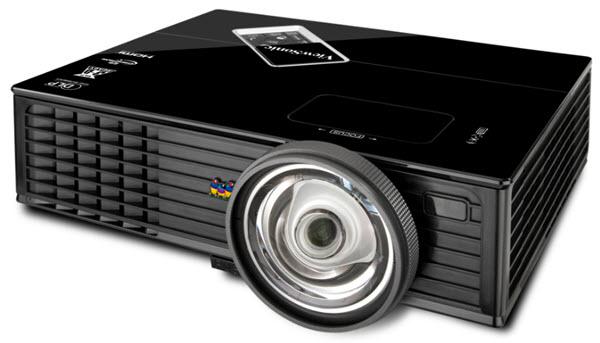 The ViewSonic PJD6683ws offers the kind of sleek good looks that can fit nicely in a conference room designed to impress clients with the dÃ©cor. But the really good news is that it works well too. Built around a 1280x800 DLP chip and sporting a short throw lens, it delivers a large-size, high-quality data image from close to the screen, making it an attractive choice in more ways than one.

In addition to image quality, the PJD6683ws earns points for fully living up to its claimed brightness, which I measured at 104% of the 3000-lumen rating. Beyond that it offers a reasonably full set of connectors, including an HDMI port, and it supports 3D with DLP-Link glasses. As is typical, however, the 3D support is a minor feature at most, with no glasses included with the projector. One other noteworthy feature is a relatively long lamp life, at 3,500 hours in Normal mode and 5,000 hours in Eco mode, to help keep total cost of ownership down.

The PJD6683ws is small and light enough to carry at least occasionally, but heavy enough, at 6.6 pounds, so that it's more likely to wind up permanently installed or sitting on a table or cart. The short throw makes it particularly appropriate for smaller rooms or for crowded rooms where it's hard to position the projector behind the audience without casting shadows. Given a $749 estimated street price, however, the bright, high-quality data image makes it worth considering even if a short throw lens isn't an absolute requirement.

Short throw. Short throw projectors let you project a big image from a short distance. This is an obvious advantage in a small room. It also helps in situations where it's hard to position a standard-throw projector so it's far enough from the screen for the image size you want without casting shadows from people or objects sitting between the projector and the screen.

ViewSonic says that at the native 1280x800 resolution and 16:10 aspect ratio, the PJD6683ws can throw an image ranging from 30" diagonally at 1 foot away to 300" at 10.4 feet. My tests suggest that the claim is on the conservative side, since I was able to get closer than 1 foot and still focus the image. I didn't try to measure the size with the projector at 10.4 feet away, but I did confirm the image was bright enough to be usable in dim lighting. For most of my tests, I used a 90" diagonal image with the projector sitting 40" from the screen.

Near excellent data image quality. The PJD6683ws's data image quality is just short of excellent. The only important problem I saw was with color balance, and that cropped up with only some presets. Various levels of gray showed a slight green tint in my tests in Brightest mode, and a slight brown tint in Movie, Dynamic Movie, and ViewMatch modes, but they were all suitably neutral in PC and Dynamic PC modes. Colors in all modes were a little dark in terms of a hue-saturation-brightness model, making yellow a little dull. However, colors were well saturated and suitably eye-catching otherwise in all modes.

More important for data screens is the projector's excellent retention of detail. Both black on white and white on black text was highly readable, with crisp, clean edges, at sizes as small as 7 points. Even better, I saw almost no pixel jitter on an analog connection. Unless you know which screens tend to bring out the problem, and you make a point of looking for it, you're not likely to notice it at all.

Potentially portable. With its 6.6 pound weight, the PJD6683ws is a little too heavy for a constant traveling companion, but light enough to bring with you occasionally. However, ViewSonic doesn't include a carrying case with it, so you'll have to buy one separately.

Long lamp life. ViewSonic rates the PJD6683ws's lamp at a reasonably long 3,500 hours in Normal mode and 5,000 hours in Eco mode. This can help keep total cost of ownership down, compared with having to replace the lamp more often. At $329 per lamp, however, the replacement cost undercuts the savings somewhat.

Three-year warranty. ViewSonic's three-year warranty for the projector plus a full year for the lamp, is longer than many manufacturers offer, making it a welcome extra. If you register the unit, ViewSonic also adds one-year of advanced exchange service, with ViewSonic sending a replacement immediately along with a return label and picking up the shipping cost in both directions.

Usable audio. The built-in audio in the PJD6683ws is better than many projectors in this weight class offer. The sound quality is good enough so spoken dialog in video clips was understandable in my tests, and the 10-watt mono Speaker was loud enough for a small to mid-size conference room. If you need stereo, more volume, or better quality, the minijack audio output lets you connect easily to an external sound system.

Bright Image. I measured the PJD6683ws in its Brightest mode at 3127 lumens, or 104% of its 3000 lumen rating. Next brightest was a tie, with PC and Dynamic PC modes both at 2296 lumens. That's still easily bright enough for the 90" inch diagonal image I used in my tests to stand up to the ambient light typical for a conference room or classroom. Also worth mention is that the PC mode, with better color balance than the Brightest mode, is the default setting as shipped.

None of the other presets drops the brightness very much, with all three other choices coming in at just over 2000 lumens on my tests. However you can drop the brightness by about 25% with Eco mode, which I measured at 2307 lumens with the Brightest preset.

Keep in mind too that as with most DLP projectors, the color brightness for the PJD6683ws is lower than the brightness in ANSI lumens, so color screens won't be as bright as, for example, a word processing document with a white background. However, the perceived difference in brightness isn't obvious.

Acceptable brightness uniformity. Short throw projectors often have problems maintaining uniform brightness across the entire screen, but even for a short throw projector, the PJD6683ws came in with a low score, at 53% brightness uniformity. Fortunately, it's not bad enough to be a problem for real world use. On a solid white or color screen, the image on the test unit was noticeably dimmer in three of the four corners than over the rest of the screen. With the image broken up by text or graphics, however, the difference was hard enough to see that most people will never notice it.

Good connectivity. The back panel on the PJD6683ws offers a reasonably full set of connectors, with an HDMI 1.3 port for a computer or video source, two VGA inputs for computers or component video, both S-Video and composite video ports, and a VGA monitor out port. For audio, in addition to the HDMI port, there are two stereo minijack inputs, with one shared by one VGA port along with the two video ports, and the other paired with the second VGA port. Finally, there's a stereo minijack audio output, a mini USB B port for connection to a computer so you can control the mouse from the remote, an RS232 port for controlling the projector locally, and a LAN port for controlling it over a LAN.

Relatively low video quality. The PJD6683ws's video quality isn't the worst I've seen from a data projector, but it's best limited to short clips. Among other issues, I saw some minor posterization, moderate problems with shadow detail, moderately obvious noise, and obviously low contrast ratio. I also saw more rainbow artifacts than with most current DLP projectors. They don't show often enough with data images to be an issue, but with video, anyone in your audience who sees the artifacts easily will almost certainly see them often enough to find them annoying.

Limited 3D. The PJD6683ws's 3D works only over the VGA port, and only with 3D-equipped computers. Arguably the more important limitation, however, is the need to buy enough pairs of DLP-Link glasses -- typically $70 or more each -- for your audience.

The PJD6683ws delivers a more than attractive mix of features, starting with the native 1280x800 resolution and the short throw lens. It's also suitably bright; it delivers near excellent data image quality; and it offers all the connections you'll likely need, including HDMI.

The one potential shortcoming is the video quality. However, the video is good enough for short clips, even with the projector's tendency to show rainbows. And if you use little to no video in your data presentations, the video quality won't matter in any case.

Keep in mind too that the PJD6683ws can be a good fit for more than one kind of use. Small enough to carry with you occasionally if you need to, it's also equipped with a LAN port for easy control over a network in a permanent installation. Be sure to add some extra points also for the relatively long lamp life and long warranty, particularly the full year for the lamp. All this makes the PJD6683ws that much more appealing, and a strong contender for anyone who needs a 1280x800 short throw projector.

For more detailed specifications and connections, check out our ViewSonic PJD6683ws projector page.