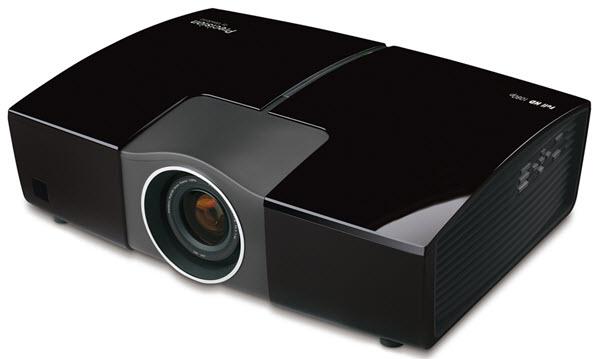 Viewsonic is well known for their line of data projectors, which offer a solid feature set for a reasonable price. However, the brand is not often seen on home theater projectors. The Pro8100 is a notable exception. Viewsonic's newest projector marks their first foray into 1080p projectors. This bright, quiet projector offers solid performance for lovers of sports broadcasts, HDTV, and video games. The introduction of the Pro8100 also marks a noteworthy diversification of ViewSonic's distribution strategy: unlike previous models, this one is being sold exclusively though customer installers and specialty retailers. The Pro8100 retails for $4999.

High lumen output. The Pro8100 is rated for 1000 ANSI lumens. After we adjusted color temperature, our test sample measured 750 lumens in high lamp mode. That's a very bright color-balanced picture for a projector rated at 1000 lumens. It is plenty of power for a 100" screen in moderate ambient light, or a much larger screen in a dark viewing room. Low lamp mode brings output down to 591 lumens, a 21% reduction. As always, these numbers are calculated using the widest angle (brightest) setting on the zoom lens. Using the Pro8100's 1.6:1 zoom lens in its maximum telephoto setting reduces lumen output a further 18% which is not much compared to most zoom lenses of this length which can cut light by twice this much. So the Pro8100 could be a good choice for installations that require more lumen output than you get from many 1080p projectors.

In a dark room with a smaller screen, 750 lumens is too much light, and it can cause eyestrain and headaches after extended viewing. However, the Pro8100's other image modes can reduce output to roughly 350 lumens, which is arguably perfect for a 100" diagonal screen without any ambient light present.

Good connectivity. The Pro8100 has plenty of input options, including two HDMI 1.3 inputs, two YPbPr component inputs, and a 15-pin VGA port. Also included are a 12-volt trigger for motorized screens, a USB port, and an RS-232 port for external control.

Placement flexibility. As with most LCD home theater projectors, the Pro8100 has excellent placement flexibility. The projector has a 1.6:1 powered zoom/focus lens, allowing the projector to fill a 100" 16:9 screen from a throw distance of 10'3" to 16'7". The Pro8100 also has powered vertical and horizontal lens shift, with a vertical range of 2.5 screen heights. This allows the image to be placed either completely above or completely below the centerline of the lens, which makes coffee table and ceiling mounts easier, while rear shelf mounting is a snap. The horizontal lens shift has a range of 11% of the picture width in either direction, enough to compensate for slightly off-center mounting.

Color. Color balance out of the box with factory defaults is not particularly accurate, but it can be calibrated to look very good. You won't need to worry about this because the Pro8100 is being sold by professional resellers who can deliver it with installation and calibration services at the time of purchase. After calibration, our test unit had solid grayscale tracking with temperatures around 6500K from 30 IRE to 80 IRE. Below that (0-20 IRE) the Pro8100 was too warm, with color temperatures around 5000K; above 80 IRE, it was closer to 7500K. The solid mid-range performance and barely detectable cooling of the highlights means that the vast majority of content will look accurate, though the warm shadows may be noticeable to those who bother to look for it.

Low audible noise. In low lamp mode, the Pro8100 is rated for 18dB of operating noise. In reality, the projector nearly silent in low lamp mode, and we had a hard time determining whether or not it was warming up at first. This makes it an excellent choice for small rooms, since the fan noise will not be distracting to the audience, no matter where the projector is situated.

Average Contrast. In our contrast tent, the Pro8100 measured 258:1 ANSI contrast, which puts it in the same range as many other LCD 1080p projectors. Full on/off contrast measured 3011:1, which is somewhat lower than other 1080p models we have measured. Practically speaking, the Pro8100 does not achieve blacks that are quite as deep as the competition when viewed in a light-controlled room. However, its higher than average lumen output can make it sparkle in a room with ambient light. This makes the Pro8100 a particularly strong unit for sports fans, HDTV watchers, and video game enthusiasts who like a bit of light in the room.

Image noise and softness in standard definition. While the Pri8100's HD picture is sharp and clear with minimal noise, it showed excessive image noise when displaying standard definition DVD over HDMI. This was visible with all content but especially apparent with video. When viewing the same material with a component video connection, borders were softer and detail less crisp, but there was not as much noise.

Confusing menu system. While most projectors have a tabbed or hierarchical menu system, Viewsonic uses something completely different. The initial menu screen displays the active input and its current resolution. From here, you can press left for a status display (a graphical representation of your current settings) or press right for the meat of the menu.

Pressing right takes you to a menu featuring five boxes, labeled Picture, Config, Advanced, Memory Settings, and PCS (Precision Color System). Pressing enter on any of these will bring you to their respective submenus, which are lettered in tiny type. Selections on these submenus are hard to see, as the highlighting for the currently selected item and the currently active item are almost identical.

Some menu placements make little sense. For example, to adjust color temperature manually, which is necessary to bring the Pro8100 to 6500K, one might think that the adjustments would be located in PCS. They are not. One must go into the Picture menu, select Color Temperature, select User, back out to the main menu, select Memory, select Custom Color Temperature, and adjust from there. Why these closely linked settings are located in two separate tabs is baffling.

The good news is that you will have a professional installer to navigate the menu system, perform the calibration, and teach you how to operate the unit.

The Pro8100 and the InFocus IN83 are both 1080p projectors selling for roughly $5000 through custom installers and specialty home theater retailers. Both are exceptionally bright and work well in ambient light. The Pro8100 is LCD while the IN83 is DLP. Other key differences are as follows:

Light output. The Viewsonic Pro8100 can produce up to 750 ANSI lumens, as noted above. However, the IN83 is capable of 1202 ANSI lumens with BrilliantColor active and 1167 lumens with BrilliantColor turned off (our preferred setting). For high ambient light conditions, the InFocus IN83 is the stronger of the two projectors. Both units have a minimum lumen output around 300 ANSI lumens for situations where full light output is not appropriate or desired.

Contrast. The IN83 has superior contrast to the Pro8100 in every situation. In ambient light, the IN83 will appear to be higher in contrast than the Pro8100 due to its higher lumen output. In a dark room, the IN83's deeper black level and 517:1 ANSI contrast gave it a clear edge.

Color. As described above, the Pro8100 shows accurate color between 30 IRE and 80 IRE, with deviations at both ends of the gray scale. The IN83 delivers nearly perfect color temperature, with slight deviations below 20 IRE and perfect 6500K from above 20 IRE to 100 IRE. While either projector is good, the IN83 again has a slight edge.

Connectivity. The Pro8100 has two HDMI 1.3 ports and two component inputs, while the IN83 has one HDMI input, one M1-DA input, and one component input.

Placement flexibility. The Pro8100 and its powered 1.6 zoom/focus and powered vertical/horizontal lens shift make the IN83's fixed-throw 1.2:1 manual zoom lens seem useless in comparison. The Pro8100 has a great deal more versatility when it comes to options for placing in your viewing room.

In an LCD vs. LCD comparison, we put the Pro8100 up against the Panasonic PT-AE2000U, which is one of the most popular 1080p projectors amongst our readers at the moment. The AE2000 is a fully featured projector with great image quality for the price. Let's see how these two stack up.

Lumen output. In their brightest modes, the AE2000 is capable of 900 ANSI lumens and the Pro8100 is capable of 750 lumens. Either would be well suited to a room with imperfect light control, so this category is a draw. It is hard to imagine a situation where one would need 900 lumens and 750 lumens would not do the job.

Contrast. In our contrast tent, the Pro8100 measured 258:1 ANSI contrast and 3011:1 on/off contrast. Meanwhile, the Panasonic AE2000 measured 305:1 ANSI contrast and 4150:1 on/off contrast. This translates into slightly better performance in darken viewing rooms, with marginally better shadow detail and black level. While this is a significant difference on paper, it is doubtful that one would see a difference without a direct, side-by-side comparison.

Price. While these projectors are similar in their capabilities, the AE2000 sells for $2700 while the Pro8100 sells for $4999. These products are intended for two separate markets; the AE2000 can be purchased on the Internet and is favored by a lot of do-it-yourself hobbyists. The Pro8100 is sold through custom installers and specialty shops. The extra money you spend on the Pro8100 pays for the expertise of the installer, who will help you design, install, and configure your theater as a complete turnkey solution. By the time they are finished, you will have a complete home theater, including a calibrated projector, without ever having to lift a screwdriver or turn a wrench. If you are more of the do-it-yourself type, though, the AE2000's excellent performance for the price can be extremely attractive.

The Pro8100 is a solid projector and a good first effort from Viewsonic as far as serious home theater projectors are concerned. Higher than average lumen output, a sharp clean HD image, and vibrant color make it a competent performer for HDTV and video games. Quiet operation and good connectivity make it easy to live with.

While it has more lens versatility than the comparably priced InFocus IN83, it does not have the IN83's contrast, black depth, or maximum brightness. Meanwhile, in terms of image dynamics it more closely resembles the less expensive Panasonic AE2000.

Overall the Pro8100 turns in a good performance with a brilliant, engaging, well-balanced natural HD picture. If you are seeking assistance from professional installers to help you design and install your home theater, this may be one of the new 1080p projectors they will be showing you. If you have the opportunity to audition the Pro8100, by all means do so. You may find it has just the right combination of features and professional support you are looking for.

For more detailed specifications and connections, check out our ViewSonic Pro8100 projector page.