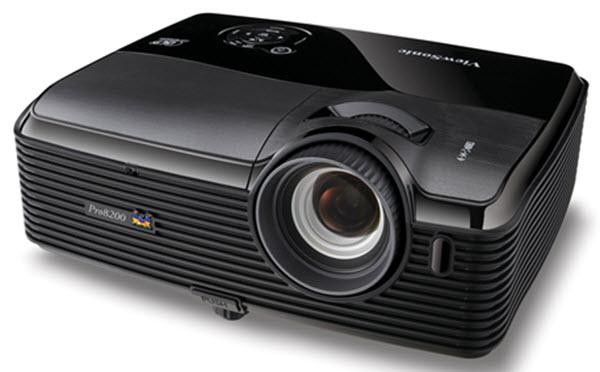 Good home theater doesn't have to cost much. The Viewsonic Pro8200 is a 1080p projector that costs less than $1,000 from authorized resellers. Its 2,000 lumen maximum brightness makes it quite versatile, able to project in the theater or the living room equally well. A 1.5:1 manual zoom lens allows easy placement in many rooms, while a pair of HDMI ports and dual 10W speakers create opportunities to use the Pro8200 as a mobile theater in itself, free of fixed installations and A/V receivers. Low-cost replacement lamps, a 6,000 hour maximum lamp life, and a three-year warranty ensure affordability. The Pro8200, while easy on the budget, is a capable home theater projector suitable for theater/film viewing or Sunday afternoon football.

The Pro8200 has high brightness and moderate contrast, at 2000 lumens and 4000:1. It has a longer than average zoom range, at 1.5:1, but no lens shift. These features make the Pro8200 flexible when it comes to installation and viewing environment. The high brightness could allow easy use in a well-lit living room at diagonal sizes up to 50" or 60", essentially serving as a replacement for a flatscreen TV. Placement on a coffee table would minimize hassle and expense, and at 8.5 pounds the projector is actually quite portable as well. It even comes with its own carrying case. With dual 10W speakers, one could use the Pro8200 as a mobile video projector, perfect for game day at a friend's house.

On the other hand, lumen output can also be reduced somewhat, allowing use in a home theater with good light control. While black level is not as deep as some other competitive models, with some adjustment it can create very respectable shadow detail. Dark Room, a more color-balanced operating mode than the default Brightest mode, still puts out up to 1475 lumens. This lets you light up very large screens up to 150" diagonal, though the Pro8200 looks its best on a smaller screen around 120" diagonal.

All of the included operating modes are somewhat cool in color temperature, with even the most accurate measuring around 7500K at its defaults. The projector can be dialed in quite a bit closer to the ideal 6500K grayscale, 2.2 gamma, and Rec. 709 color space without much effort. In our case, the 'quick-and-dirty' color temperature settings entailed raising Red up to 60, leaving Green at 50, and bringing Blue down to 40. This brings you closer to the 6500K standard without necessitating a meter or an expensive professional calibration.

In a light-controlled theater setting, a ceiling mount is the preferred set up to minimize fan noise and heat exhaust from the projector. The lens has a throw angle offset of 33%. That means if you ceiling mount it, the top edge of a 100" diagonal picture will appear about 16" below the centerline of the lens. The picture itself will be about 4 feet in height. So with the ceiling mount clearance added in, the picture would be just about centered vertically on an 8 foot wall, with two feet below the picture and two feet above. If you want to go much larger than a 100" diagonal image, a room with a higher ceiling would be desirable. High lumen output. The Pro8200 is capable of serious light output when required, up to a stated spec of 2,000 lumens. Brightest mode, true to its name, produced the highest output of any mode on the projector at 1941 lumens. Brightest mode pushes highlights, in come cases blowing them out, and has a cool tint due to the default color temperature (our test sample measured approximately 7500K). This is preferred in a living room setup, since the high brightness will help combat ambient light and the slight blue push counteracts the typical yellow tint of most interior lighting.

Now, 1941 lumens is a lot of light--too much for many applications. There are several ways to handle this. You can switch to low lamp mode for a net brightness reduction of 21% (and a 2,000 hour increase in lamp life). This brings Brightest mode to 1534 lumens on our test sample. You can also switch to any of several other operating modes that reduce brightness significantly. Standard mode measures 1552 lumens with the lamp at full power, though it preserves the cool tint of Brightest mode. Theater mode improves shadow detail while still putting out 1281 lumens. Finally, Dark Room mode at default produces 1475 lumens in high lamp mode and 1145 lumens in low lamp mode. While none of these modes are very well calibrated out of the box, Dark Room provides the best balance of highlights and shadows and thus has the best potential for light-controlled home theater use. With a boost of red and a reduction of blue, color temperature is passable in all of these image modes.

Contrast. The Pro8200 looks best when provided with high-contrast material, where highlights and shadows occupy the same frame at the same time. In these instances, the projector's high brightness and good shadow detail have a chance to work in concert, resulting in a highly appealing image. The Pro8200 does not have an auto-iris or dynamic gamma, which more expensive home theater projectors use to lower black level. As a result, black level is not as deep as on the pricier models. But contrast is solid.

Picture quality. Sharpness and clarity on the Pro8200 are excellent, with fine detail from Blu-ray movies coming through cleanly and accurately. The Pro8200 has good dynamic range and clear, open mid-tones which contribute to the feeling of three-dimensionality. Taken as a whole, the picture (once color adjusted) appears life-like and accurate.

10W Stereo speakers. Unlike every other projector in this price range, the Pro8200 has stereo speakers at ten watts each, making for a nice on-board sound system when you need it. The speakers are small and they sound small, with a certain rattling, tinny character when driven too hard or too loudly. But when you're bringing the projector over to a friend's house and just want something that you can hear, the on-board speakers definitely fit the bill. They outpace the competition in this price bracket, most of which have three- to five-watt mono speakers if they have any audio at all.

Low maintenance. The Pro8200 uses DLP's filter-free design, so the only part you will need to replace on anything approaching a regular basis is the lamp. Lamp life is estimated at 4,000 hours in high lamp mode and a whopping 6,000 in eco-mode. Replacement lamps direct from Viewsonic cost $329, which is normal for a home theater projector. When looked at on a cost-per-hour basis, the Pro8200 costs between five and eight cents per hour to operate. Drop a dime in a jar every time you watch a movie and you'll have the cash for a new lamp when the time comes.

Color and Grayscale. While the Pro8200 is a solid projector for film and video, color is not quite right straight out of the box. All of the Pro8200's preset image modes, including the theater modes, have a cool bias due to higher than ideal factory calibrated color temperatures. As with most projectors, some calibration will help bring color accuracy in line with standards. On pricier projectors, one might want to hire a professional to do the calibration, but on this one we'd suggest eyeballing the corrections. You only have a simple red, green, and blue adjustment to work with. They all are set at a value of 50 for defaults. On our test sample, we boosted red to 60, reduced blue to 40, and left green as is. The resulting picture looked plenty fine for an entry level home theater projector.

Default to Full Lamp Power. Once you put the unit into eco-mode, it won't stay there once you power off the projector. Each time you turn it on, you need to reset the lamp to eco-mode if that is your desired operating mode.

Noise and heat. The Pro8200's high brightness and small size result in some noticeable fan noise, though that is not unusual for this class of projector. The noise is low in pitch and for most users it won't be considered distracting. Eco-mode reduces the noise level to a whisper. Although noise is somewhat more evident than on most home theater projectors, these products in general are very quiet these days.

There is also an accompanying heat output, also typical of high-brightness portable DLP projectors. Fan noise and heat are not a problem unless you plan to table-mount your projector, in which case you should consider the proximity to the viewer's seats to avoid any discomfort.

While not exactly the same, the Pro8200 and the Mitsubishi HC4000 share a lot in common. Both are DLP 1080p projectors that came out in Q4 2010. They are about the same size and weight, and both come in a black case. Both have moderate on/off contrast and manual 1.5x zoom lenses with 33% offset. That, however, is where the similarities end.

Contrast. When placed side by side, the HC4000 has a clear edge in black level. Blacks are deeper, shadow details are more clearly defined, and it has a more natural handling of contrast in general. Next to the HC4000, the Pro8200 looks slightly digital. The HC4000 has a better balance between bright highlights and deep shadows.

Color. Color on the HC4000 is nearly perfect at its default; our test sample was very close to the 6500K standard with no adjustment at all. Meanwhile, the Pro8200 requires some adjustment before it is ready to use in a theater environment.

On-board audio. If you plan on taking your projector to a friend's house, the on-board audio of the Pro8200 may be extremely handy. The HC4000 has no audio at all, and an external sound system is mandatory.

In summary, the Mitsubishi HC4000 will appeal more to the videophile who intends to use the projector in a dedicated home theater environment. The Viewsonic Pro8200 is brighter and more versatile, and with its on-board audio is more likely to be used in portable applications.

The Viewsonic Pro8200 can produce a very attractive 1080p video image. The factory default color settings need a bit of adjustment, but once tweaked the Pro8200 goes from good to great. For the living room or the theater, the Pro8200 is a bright, light, portable projector that's great for game day, movie night, or anything in between.

For more detailed specifications and connections, check out our ViewSonic Pro8200 projector page.

Also a brighter picture always makes it easier to see the digital switching of the DLP micro mirrors.
john fawcett Posted Feb 28, 2011 2:25 PM PST
With the exception of the on-board speakers, how does this projector compare to the Optoma hd20?
Navanian Posted Mar 10, 2013 12:30 PM PST
Last night, I was playing FIFA 2013 which runs at 720p and the color performance difference between 1080i and 720p was huge. Does anybody know why? This is my first projector and I wanted to keep under 1000. Just got it and I have not mess with settings. Any input is very well appreciated....
Grant Posted Sep 2, 2013 12:38 AM PST
I just bought this projector and I've noticed an excessive amount of horizontal screen tearing. Is this just because I'm running 32bit windows xp? I don't see it in game but it's hard to miss on netflix or other streaming videos.
Jeremy Hop Posted Jun 4, 2015 5:05 PM PST
I notice the same thing using a WD TV Live . on initial boot, the splash screen is 720 and it resets again at 1080p and the latter seems dimmer. Odd.