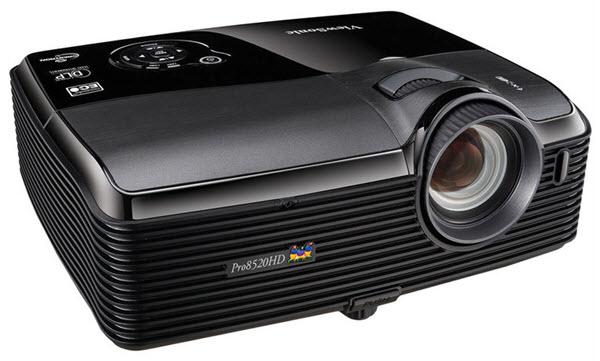 Viewsonic's newest 1080p projector, the Pro8520HD, is a big bright model designed for use in conference rooms, board rooms, and other business environments. Promising up to 5,000 lumens of brightness, the Pro8520HD is designed to be flexible and friendly, with a 1.5:1 zoom lens to help it fit into your room and a cornucopia of connectivity to get all of your devices hooked up. Its MSRP of $2,299 puts it right in the middle of the pack for this class of projector, but its image quality is good and its feature set is impressive, making it a strong value.

In our dimly lit theater space, the Pro8520HD's light output overwhelmed the screen and did a fair job of lighting the entire room all by itself. After turning on some room lights, increasing the size of the image, and switching to Eco mode, we had a much more appropriate level of brightness.

Our testing started out with some text documents, Excel spreadsheets, and text-based PowerPoint presentations. The Pro8520HD displays all of these crisply and clearly and maintains sharpness from edge to edge, with no trace of softness in the projector's 1080p image. All of the projector's image modes did an excellent job with these types of material.

Color performance, on the other hand, varies. The Viewsonic Pro8520HD is a single-chip DLP projector optimized for high light output, which means two things: one, it has a color wheel that is not solely RGB, and two, it makes heavy use of BrilliantColor to boost white light output. Image modes like Brightest and Standard emphasize white light output at the expense of colored light output, so color-rich content like photos and video tend to look out-of-balance, with over-bright highlights and poor color saturation. To get satisfying performance for these types of content, you can switch to either the Theater or Dark Room modes, which cut light output but have much better color saturation and overall image balance.

Perhaps the most surprising application for the Pro8520HD is gaming. While the Pro8520HD is not a gaming projector, it is bright, high resolution, has fairly accurate color in Theater and Dark Room modes, and measures just 10 milliseconds of input lag. These qualities make it a great choice for large-screen gaming use in a partially light-controlled environment, where the extra brightness gives the Pro8520HD an edge over products marketed for home theater.

The Pro8520HD has a manual 1.5:1 zoom lens, which is a bit more reach than is typically seen on this class of projector. This zoom range allows the Pro8520HD to hit a 150" diagonal 16:9 screen from 15' 4" to 23' 4". The lack of lens shift, typical for this class of projector, means you'll need to esnure your installation is planned out properly. The Pro8520HD has a fixed throw offset of 32%, meaning the edge of the image (bottom edge for a table mount, top edge for a ceiling mount) is offset 32% of the image's height from the centerline of the projector's lens. On our 150" diagonal image, that's an offset of 24".

The Pro8520HD has a full connection panel, with two HDMI inputs, two VGA inputs, a dedicated VGA monitor passthrough, audio in/out, and both wired and optional wireless networking. Most users will have more than enough ports to connect any device that's needed.

Great for video gaming. Despite the Pro8520HD's business pedigree, it excels as a video gaming projector. In our input lag testing, it measured a super-fast 10 milliseconds, or less than one frame of delay. Coupled with a bright picture and reasonably accurate color in Dark Room mode, the Pro8520HD can create a bright, high-resolution gaming image that's incredibly responsive. And with almost 2,000 lumens at your disposal in Dark Room mode, you can keep some of the lights on as well.

Placement flexibility. A 1.5:1 manual zoom lens makes the Pro8520HD easier to install in a variety of conference rooms with different installation needs. Often, an organization will require projectors in several different rooms, and those rooms may not all be identical, which can make it more difficult to pick projectors for each situation. By making one projector that can fit in a variety of rooms, life for purchasers, installers, and support staff becomes much simpler.

Connectivity. The slate of connections on the Pro8520HD's rear panel makes it a simple task to connect a variety of sources, from laptops to Blu-ray players to digital video cameras. The projector also has a 1/8" audio input for a microphone along with a separate microphone volume slider in the menu system, so you can provide amplified narration during presentations.

Three-year warranty. A three-year standard warranty protects you in the event that the Pro8520HD fails in some way to perform up to expectations. Three years is long for a projector warranty, and the added value should be considered in purchasing decisions.

10W stereo speakers. The Pro8520HD's speaker system packs a punch. It's no match for dedicated external speakers, obviously, but it's better than nothing at all.

DICOM SIM. DICOM stands for "Digital Imaging and Communications in Medicine" and the part that we're concerned with describes a standard used for medical imaging devices -- think x-rays. The DICOM SIM mode on the Pro8520HD simulates a proper DICOM imaging environment. The idea is that it can be used for lectures and education, but not for actual patient diagnosis (hence the "SIM" part, for "simulation"). This opens up the Pro8520HD to medical classrooms and doctor's offices, as well.

Light output. As a projector built for use in ambient light, the Pro8520HD is sufficiently bright for most conference rooms. "Brightest" mode, the projector's default, measured 2942 lumens on our test sample with the lamp set to full power and the projector's lens at its widest angle. Brightest mode emphasizes white light output over color and contrast, and as a result is best for monochromatic or text-based content like Word documents or spreadsheets. Standard mode, at 2656 lumens, shows an incremental improvement in contrast and color saturation but is still largely similar to Brightest mode.

However, when it comes to color fidelity and contrast performance, the projector's best mode is Dark Room. Not only does Dark Room mode produce 1988 lumens, making it brighter than Theater mode, but it also has the best color saturation and color brightness of any image mode. If you're going to be watching movies or looking at photographs, Dark Room is your best bet.

The final preset image mode is DICOM SIM, which measures 3896 lumens. This actually makes it the brightest mode on the projector, about 1000 lumens more than "Brightest" mode. However, it is not appropriate for all types of content due to its specific calibration, so Brightest mode still does have its own distinct application.

Any image mode can have its light output decreased by selecting ECO lamp mode from the menu. ECO reduces light output by 29% in all operating modes. This can be useful when in a darkened room or using a smaller screen, or if you use the projector at night when ambient daylight is less of a concern.

Contrast. As a data and presentation projector, contrast is much less important to the Pro8520HD than brightness. However, the projector does a respectable job with video and photography. Dynamic range is more than sufficient to bring out most shadow detail, though you do lose a bit in the deepest shadows due to the lackluster black level. If contrast is important, it helps to optimize your environment and switch to ECO lamp mode, which cuts down on the projector's brightness and makes it easier to see shadow detail in dark areas.

Color. The quality of color you get out of the Pro8520HD depends on which image mode you use. If you select Theater or Dark Room mode, you end up with color that is reasonably accurate, well saturated, and balanced well with white. If you use Brightest or Standard mode, you get a much brighter white and by comparison dull, undersaturated color. Since BrilliantColor is not configurable on this projector, your best bet is to use Dark Room or Theater mode when color matters and Brightest or Standard mode when it does not.

Sharpness and clarity. As a native 1080p projector, the Pro8520HD will look its best when given a 1080p input signal, but it will do an admirable job of converting non-native signals to 1080p as well.

Input lag. While the Pro8520HD is a business projector first and foremost, it also measured a blazing fast 10 milliseconds in our input lag testing. That gives it less than a single frame of delay in bringing content from source to screen, making it a good choice for gamers who need fast response times. In fact, 10ms is one of the fastest times we have ever measured on a projector, period.

Brightness. Though the Pro8520HD is advertised as a 5,000 lumen projector, it does not have a pre-calibrated image mode that reaches this specification. Its brightest mode is DICOM SIM at 3896 lumens (just under 80% of spec), but DICOM is not appropriate for all types of content. More importantly, the projector's white light output is significantly higher than its color light output. In Brightest mode, color light output only amounts to 28% of white light output -- so while white measured 2942 lumens, a full color image will look like it is only about 825 lumens. The best mode for color saturation is Dark Room mode, where color measured 79% of white.

Lamp life and cost. The Pro8520HD's lamp is expected to last 2500 hours at full power and 3000 hours in Eco mode, which is a touch shorter than the average these days. What's more, replacement lamps cost $499 from Viewsonic, bringing the estimated cost per hour to between sixteen and twenty cents. Compared to other presentation projectors in the Pro8520HD's performance class, that's on the expensive side.

No 3D. The Pro8520HD does not have 3D capabilities, while several competing models do. While this isn't a problem if you don't plan to use any 3D content, it does rule out 3D gaming as a possible application. Then again, 3D projectors tend to have higher input lag than non-3D projectors, so it is possible that those competing models are less appropriate for gaming.

The Viewsonic Pro8520HD is a great projector for conference rooms and other business environments. It pairs high light output with a full feature set and excellent connectivity to create a presentation projector that's easy to use. It couples this performance with an industry-leading three year warranty to ensure your continued satisfaction. And with only ten milliseconds of input lag, it also serves surprisingly well as a gaming projector. Whether you're building out your business, lecturing the doctors of the future, or just saving the world in your favorite game, the Viewsonic Pro8520HD has something to offer.

For more detailed specifications and connections, check out our ViewSonic Pro8520HD projector page.