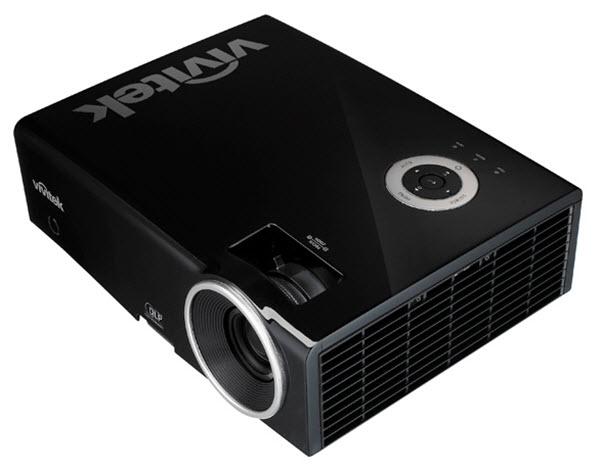 Vivitek's recently released D935VX is a 3000-lumen, XGA resolution projector using DLP technology. While it is a powerful addition to any classroom, its high brightness and moderate throw lens make it especially well-suited to large classrooms or small lecture halls. Exceptional performance with data and graphics, coupled with solid video quality, make the D935VX a steal at street prices under $800.

High lumen output. Despite its small size, the D935VX packs a large punch. Our test sample measured 2335 lumens in its brightest mode, which can light up a small lecture hall quite well if it has a modicum of light control. In a smaller classroom, presentations can be made with all room lights on. Having a lumen output as high as the D935VX's gives the user a lot of flexibility.

Low lamp mode increases lamp life to 4,000 hours, and drops lumen output 20% to 1875 lumens. This is still enough light output to display a 100" diagonal picture in medium to high ambient light, so many users may feel that the extra thousand lamp hours are worth the trade-off.

Excellent connectivity. The connection panel of the D935VX has more ports than you can shake a stick at. The usual suspects are all there - VGA, monitor passthrough, composite and s-video, a Kensington lock. However, there are some newcomers, as well - like a second VGA input, an HDMI port, both 1/8" and L/R RCA audio inputs, a 1/8" audio passthrough, and a second locking point for a cable or bar lock. A USB port provides control of the computer's mouse via the remote control. RJ-45 wired networking provides its own set of benefits, listed below. And an RS-232C serial port allows for control of the projector from another computer or remote device. Put simply, the D935VX has it all.

Wired networking. A wired network connection has several advantages in the classroom. First, problems with your projector will be noted by the IT department instantaneously - the projector can send all status reports along the network to a monitoring location. Second, user errors can be corrected. If you leave the projector running, it can be turned off remotely. Third, it serves as a theft deterrent and early warning system. Just as network administrators can set up alerts to notify them when a critical piece of hardware fails, they can do the same with the school's projectors; any potential thief should be caught in short order.

The one major flaw with wired networking is that the projector must be more or less stationary. For the system to work at all, a projector has to be connected to the network and remain connected to the network all the time. That limits the usefulness of this feature to projectors installed in a ceiling mount or other stationary installation. However, the D935VX is ideal for a ceiling mount - it has a moderate-throw lens, great connectivity, and it's very bright - so quite a few users should be able to take advantage of this feature.

Good video performance. While the D935VX is not a home theater projector, it is a sub-$800 DLP projector with fantastic contrast that happens to look extremely good when playing high definition video. The projector's HDMI port is an excellent vehicle to bring HD content into the projector, and it looks great on screen. The contrast makes the image pop; color is fairly accurate when using the "Movie" or "sRGB" modes, and you end up with a bright, vibrant picture. In a lecture hall, this is a wonderful feature, since large halls are sometimes used by student organizations or just to host a movie night. If nothing else, one might want to borrow the D935VX for the weekend and play a movie for the kids. The only flaw in the video image is the presence of occasional rainbow artifacts due to the 2x speed color wheel.

Security. The D935VX has both a Kensington lock point and a cable lock. These locking points allow some flexibility in the projector's security arrangements - you can use either one or both at the same time. Some children have a sense of mischief that inspires them to try to steal everything not nailed down, we would recommend that you use both.

The D935VX also has a password function, wherein the projector requests a password on startup and will not display an image without it. Anyone wishing to use the projector needs the password, or it becomes a useless box of parts. While this won't stop someone from stealing the projector, it will provide a disincentive - if they know it exists.

Quiet operation. While this is less of a concern in large rooms, the D935VX is significantly quieter during operation than the competition. Compared to other 3,000-lumen projectors, the D935VX is whisper-quiet, allowing teachers to be heard easily over the projector's fan. This is especially important in small classrooms, but less audible noise is never a bad thing, no matter your room size.

Remote control. The projector's remote is full-featured, if a touch confusing. The top directional pad controls an attached computer's mouse, in case you need to change something without walking back to your PC. A laser pointer and A/V mute are useful presentation tools, and help to direct the audience's attention. Its small form factor is not too small, so you are not likely to lose it in a desk drawer. However, the downside is that there are two directional pads - one for the mouse and one for the menu system - and your thumb naturally rests on the pad used for mouse control. Since most people will use this pad less often, it can be slightly annoying.

Short warranty. The D935VX has a one-year warranty, with a 90-day guarantee on the lamp. A one year warranty is the bare minimum seen on projectors.

Replacement lamp cost. The replacement lamp is $499, which is higher than normal for this class of product. The good news is that the lamp it expected to run 3000 hours in full power mode, and 4000 hours in eco-mode. That is a longer life than the standard 2000 hours we find on most digital projectors these days.

Moderate-throw lens. The D935VX's moderate-throw lens is fine if you are planning to ceiling mount the unit. However, on a rolling car or desk top, it may be back between the seats near students. A 100" diagonal image requires about 13' of throw distance, give or take a foot. This is a somewhat longer throw than on other classroom projectors we've seen lately. Be sure to check out our Projection Calculator to ensure that the D935VX will fit in your classroom properly.

Vivitek's D935VX is a powerful, full-featured projector that's perfect for larger classrooms. High lumen output, a moderate-throw lens, and wired networking make it ideal for ceiling mounting in a small lecture hall. A good remote control is often taken for granted, but makes the lecturer's job much easier. Physical security features keep theft to a minimum, and a low street price keeps the whole package affordable. Look for the D935VX at street prices around $800.

For more detailed specifications and connections, check out our Vivitek D935VX projector page.