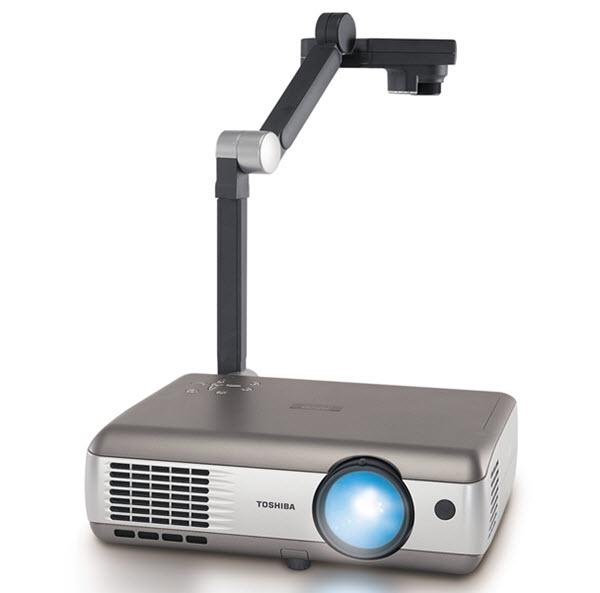 Subscribe
SHARE
In This Review
IN THIS REVIEW
David Colin
Toshiba T501U XGA 3LCD Projector
Price
$4,265 MSRP Discontinued
The most unique feature of the T501 is its document camera. Although most presentation materials are readily available in digital form on a computer, what gathering of people hasn't had the need to share a document or small object for discussion? Toshiba recognized this need some time ago and became the first manufacturer to integrate a document camera with a projector.

What does this have to do with wireless projection you ask? Probably nothing. But we thought it might be interesting to see how a document camera played into the wireless presentation environment.

Basic Features of the T501

This projector uses 3 polysilicon TFT-LCDs with a native resolution of 1024 x 768 pixels (XGA) and video scaling hardware to handle image sources of up to 1600 x 1200 pixels (UXGA). The unit is rated at 1600 ANSI lumens with 400:1 contrast in a 9-pound package that includes the document camera. The lamp has an economy mode that reduces its lumen output to 1200 ANSI lumens. This mode lengthens the lamp life 25% (2000 hours to 2500 hours) and reduces the projector noise from 35dB to 32dB.

The unit supports 2 RGB inputs for use with a computer or a component video source and a monitor connection for local viewing. It includes all the popular video sources including 1080i, 720p, 480p, 480i, component video, and S-Video. A 1.25 manual zoom lens with automatic keystone correction makes for easy setup.

The remote control includes a laser pointer and controls for accessing all the features of the projector except the camera. It may also be used as a wireless mouse by attaching the supplied mouse receiver to a computer.

Its PC Card slot can support a memory card or wireless 802.11b Wi-Fi; however, the slot cannot be used for a wired connection such as an Ethernet card.

The Manufacturer's Suggested Retail Price (MSRP) for the T501 is $5,199 and includes an 802.11b Wi-Fi card for the projector. The optional memory card may be purchased separately. You will need to purchase additional Wi-Fi cards for each of your wireless users and Toshiba recommends, as most manufacturers do, that the cards be the same as the Wi-Fi card provided with the unit. If the camera is not an important consideration for you, the TLP-T500 is the T501 without the document camera and is $904 less. The T500 weighs in at 1.6 fewer pounds and is 2.5 inches shorter than the T501.

The T501 was relatively easy to setup. Using a Windows XP notebook computer, we installed the wireless card provided by Toshiba into a notebook, loaded the Wireless Utility software provided by Toshiba, and followed the setup procedures described in the Owner's Manual.

The wireless setup was operational within minutes. Your experience may differ. We've had the benefit of having done this a few times with other products; however, generally speaking if you follow the procedures rather than 'wing' it, you'll have good success. We have also found that Windows XP is far friendlier than other Windows platforms for installing Wireless LAN PC Cards.

Something to keep in mind with wireless projectors is image quality and transfer times. While they all adhere to the same hardware standards and protocols the software/hardware that handles the compression and decompression of the information being transferred varies considerably.

Consider that an XGA projector has 1024 by 768 pixels of resolution and each can have 24 bits of color information. That's about 19 million bits of information to generate one projected image. Consider that wireless 802.11b has a data rate of 11 million bits per second. That says it would take about 1.7 seconds to transfer a full color XGA image. Now that might not seem too severe if you're doing a presentation, but the truth is the real data rate of 802.11b is much less considering the protocol overhead and the handshaking required for the wireless computers connected to the projector. The real data rate can be half the maximum. That doubles the transfer time to almost 3.5 seconds. Clearly this becomes a problem.

To deal with the transfer time issue, compression and scaling algorithms are used; however, the techniques used by each manufacturer will vary and so do the results. Ideally you want the same performance you get with a wired connection, but this generation of wireless is about convenience, not performance, and its audience is primarily presentation, classroom, and collaborative meetings where information is presented and discussed.

So, generally speaking there is a tradeoff between speed and quality. In the case of the T501, Toshiba let's you decide by offering two modes of operation. You guessed it: "High Quality" or "High Speed". The message is clear. You can't get both! From this reviewer's experience, go for the speed when using text and simple graphics. When using high content graphics, the load time will be slow no matter which method you use and only a videophile is likely to see the difference in image quality when viewed at normal distances, so choose the method that suits you best.

Using the Wireless Utility software provided by Toshiba you can:

When using the High Speed mode, some loss of image detail and picture quality was noticeable in some high content graphic images. However, we ran the 1997 INFOCOMM Shootout images and at normal viewing distances we could not tell the difference between High Speed and High Quality except for the speed at which the images appeared.

Projectors provide the best image quality when the resolution of your source matches the native resolution of the projector. This is particularly true with wireless operation. Avoid image scaling by having your computer output in the same resolution as your projector.

Refresh time of the image depends on the amount of content change. Depending on image content, a full screen replacement with a graphic image can take from 2 to 5 seconds in High Quality mode and about 40% less in High Speed mode. The image transitions for high content images are like a random dissolve might look in a PowerPoint presentation. Small changes to a text image, such as editing a document, take about half a second to appear in High Speed mode. Because 802.11b Wi-Fi is a radio technology, obstructions and radio frequency interference can affect signal quality and strength, which will impact image quality and transfer times.

Five levels of signal quality that we observed are shown below with the corresponding obstructions, distance and data rate experienced. Keep in mind that your own experience will vary depending on the types of line-of-sight obstructions in the room and other sources of potential radio interference:

Regardless of the transfer mode selected, there was no noticeable degradation of the image as long as the transfer rate stayed at 11 Mbps (megabits per second). When the signal strength went to Low and Very Low, the transfer rate dropped to 6 and 2 Mbps respectively. At these levels we lost considerable performance and experienced occasional break-up of the image.

The T501 is a nice package that provides all the essentials of a complete projector. The document camera adds a unique feature and clearly marks the T501 as ideally suited for business and education applications. Toshiba recognized the tradeoffs on image quality versus transfer time in designing its wireless feature. Although the product performed well, we noticed that transfer times were slower than other units we tested in the same environment. The camera feature makes the T501 a unique offering; however, even without the camera we could find only one other LCD projector with comparable features.

Our next wireless projector review will look at two DLP products. Stay tuned.

An 802.11b Wi-Fi device is basically a digital radio broadcasting in the 2.4 GHz band. Outdoors Wi-Fi can transmit tens of miles and therein lies a security issue. If your data is not encrypted, then it is vulnerable. A security algorithm known as WEP (Wired Equivalent Privacy) is intended to overcome this vulnerability; however, the industry consensus seems to be that it can be easily violated by those skilled at hacking.

So beware, a passerby seeking free Internet access or someone with more fiendish intent can access an unsecured wireless network. This practice is known as war-driving and people who indulge in this include freeloaders, thieves, and some that are simply trying to create an awareness of security issues. War-drivers may also engage in war-chalking, which is a throwback to the communication technique used by hobos to alert other hobos with chalk markings identifying free places to sleep or eat. Like the hobos, these war-chalking symbols alert other war-drivers of free services, so if you unplug and go wireless, look for a war-chalking sign near you.

For more detailed specifications and connections, check out our Toshiba TLP-T501U projector page.