Although it lacks amenities like on-board streaming found in some modern lifestyle projectors, AAXA's M7 pico delivers a bright 1080p image for its size, runs on a battery when needed, and comes in with an attractive price tag.

Small, light, and easy to move from room to room, the AAXA M7 pico projector shows the potential of lighting up a room with LEDs. While its video quality and color balance may be below the expectations of home theater aficionados, it does surprisingly well both at work (for training sessions, meetings and remote work) and at home (as a TV replacement for projecting movies, gaming and sports). It lacks any built-in streaming apps or the ability to connect wirelessly, but the M7 is a rudimentary pico projector that can be run on its built-in battery and still checks most of the boxes, including the ability to play videos off a USB flash drive or micro SD card or via inexpensive optional phone and tablet connection cables.

Indeed, the M7's most attractive characteristics are its most basic: high definition resolution pegged at full 1080p; unusual brightness for its size and weight, rated at 1,200 LED lumens; and an attractive ticket. At its current promotional price of $488, this mighty mite delivers a lot of projector.

The AAXA M7 seems to do the impossible by squeezing a full projector into something the size of a small cigar box. With its built-in battery pack, the M7 can be moved from room to room as needed, quickly set up and projecting in about a minute. It can even host an evening picnic/movie in the backyard or a video conference in an unwired garage.

Based on a 0.33-inch DLP imaging target, the M7 has banks of LED lighting elements for red, blue and green light and doesn't need a color wheel. The Osram Quad Cast LEDs are able to handle 30 percent more power than the last generation of light sources and are rated to last 30,000 hours of use. Even if the M7 is turned on for eight hours a day, this adds up to more than ten years of active use without having the change a lamp.

AAXA rates the M7 as able to deliver 1,200 LED lumens of light. This optimistic measure of projector brightness emphasizes perceived illumination of LED light at the expense of objective measurements. As with most projectors rated with LED lumens, my measurements came out closer to half at 599 ANSI lumens. That's still bright enough for most uses, and the M7 delivers rich and vibrant colors and can be used in places where other projectors can't. Tapping the battery, which is rated to last three hours, reduces brightness again by more than half.

The M7's HD resolution of 1920x1080 pixels outperforms the company's own recently reviewed P6X at 1280x800. Fortunately, the M7 can work with input signals of up 3840x2160 at 30 frames-per-second, so it's 4K ready for your streaming stick or other UHD device. It lacks the circuitry to make the most of HDR video, though.

The M7's black and dark gray case has distinctive blue edging that makes a fashion statement. At 7.3 x 1.9 x 6.4 inches (WHD), the M7 is 16% bigger than the P6X model but nearly two-thirds smaller than, for example, XGIMI's Halo projection tower. The 3-pound M7 is also a half-pound lighter than the Halo but both are heavier than the 1.8-pound P6X. With its AC adapter in tow, the M7 hits the road at nearly four pounds. AAXA supplies no carrying case or lens cap, so you're on your own figuring how to best protect it.

For its size, the M7 has a good assortment of input connections. They include a traditional HDMI (version 1.4) and a 3.5 mm AV connection that with the included adapter works with composite video and RCA stereo audio inputs.

In addition to a USB-A 2.0 port that can supply power to accessories and work with a flash drive, the M7 has a USB-C connector. AAXA sells individual $28 connection cables for iOS (iPhones and iPads) and USB-C based devices (Windows 10 PCs, Samsung phones and Macbook Pro notebooks). It also has a micro SD card slot, and can stream content from a flash drive or a micro SD card as long as its capacity is below 64GB. It can handle video, ebooks, music and photos (which can be displayed as a slideshow), but it can't display Acrobat .pdf or Office files as, for example, the the Optoma ML750 can.

On the downside, the M7 is old school by offering neither wireless streaming nor Bluetooth audio for an external speaker. But it does have a 3.5mm analog audio output for a wired connection to a powered speaker or pair of headphones, and the M7's pair of 4 watt speakers, which point out the projector's left side, are surprisingly robust. 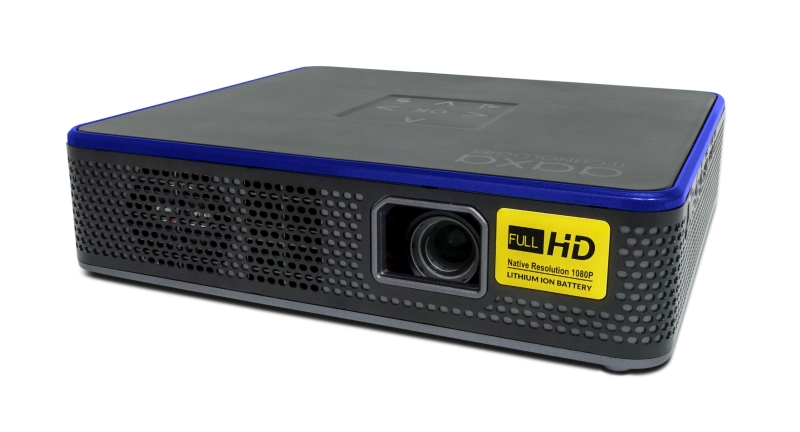 The M7 is versatile with three threaded attachment points underneath that matched up well with my generic mounting hardware. AAXA sells a $50 ceiling mounting kit that is a bargain and has room to attach the projector's AC adapter. On the other hand, the M7 lacks adjustable feet and I ended up using playing cards to tilt and level the projector.

From a sealed box, it took about a minute to get a reasonable image on a 5-foot (diagonal) screen, making conventional projectors seem awkward and clunky. As with many pico projectors, the lens has no zoom function so all sizing is done by moving the projector towards or away from the screen.

By spec, the M7 can create images of up to 200 inches diagonal, or 16.7 feet, but in practice the projector's output looks too washed out beyond about 7 feet. Be ready to pull down the blinds as well to make every lumen count. Placed relatively close to the screen, it created a remarkably vivid 45-inch image from 48 inches away. You can use the ProjectorCentral AAXA M7 Projection Calculator to see the throw distance for different image sizes.

I had a steep learning curve getting used to the M7's menu. Rather than having the Settings option always available from a button on the remote, you have to go back to the projector's main home screen and pick from among Videos, Music, Photos, Settings, Brightness and Inputs. The Settings section's Picture category is for adjusting the projection mode, noise reduction and color temperature while Sounds has manual- and auto-volume control. The Option icon leads to keystone correction, slideshow timing or resetting the projector to its factory settings.

The problem is that once you've made your changes, to return to projecting your material, you need to press the remote control's input key or access the menu's Inputs submenu and then pick from Mirror (with optional cables), Digital AV (HDMI) and RCA (composite video). This can be a little confusing and inconvenient, to say the least.

In addition to Standard and Boost brightness settings, there's a power-saving Eco setting. The M7's three projection settings include Dynamic, Standard and Mild but there's no gaming or cinema mode. Dynamic is for top output, while Standard mode reduces brightness, contrast and sharpness. The Mild setting further cuts the contrast, brightness and color levels while maintaining the sharpness and tint settings. A User mode lets you individually change any of the parameters.

The M7's conventional motorized focus is halfway between the AAXA P6X's clumsy thumbwheel and the XGIMI Halo's sophisticated autofocus. It has two buttons on the projector and remote control to focus in and out with a precise motor and helpful focusing target.

The projector's four-way control panel on top is augmented by a small remote control that runs on a watch battery. Like the P6X, there's an IR receiver only on the back of the projector and you need to deliberately aim the remote control directly at the projector for it to be effective. It lacks backlighting, but is simple enough to learn quickly. Along with keys for power on/off, volume, mute and input selection keys there are media controls for rewinding, fast-forwarding and pausing or playing material. At $10, the replacement remote is a bargain and cheap enough for the forgetful (like me) to get and stash an extra for when the original gets lost.

As noted, the projector can run on battery power from the 15,000 milliamp-hour battery beneath its skin, but it does cut the light output by more than half. AAXA engineers rate the battery life at three hours in Eco mode and 1.5 hours in Standard mode, though I got 2 hours and 38 minutes from it in Standard, so much better than the spec. It can also be used to charge a phone or tablet. Unlike others projectors that need to be taken apart to change the battery, the M7 has a battery access hatch underneath. At the moment, AAXA doesn't sell a replacement, though.

Able to project an image in 18.6 seconds, the M7 turned its fan off 5.2-seconds after power-down. Using the top output Dynamic mode and the Boost settings, it put out a respectable 599 ANSI lumens. Changing to the Standard and Mild modes, the M7 delivered 459 and 450 lumens. Dropping the output to Standard illumination, the M7 provided about 20 percent less light, while using the Eco setting reduced output by 80 percent.

Unfortunately, the brightest Dynamic mode gave everything a bluish-green cast that made flesh tones and nature scenes look distorted. Still, it's the best bet for presentations and showing Excel spreadsheets where color balance can take a back seat to illumination. The Standard mode is less bright but has a warmer feel and is better for naturalistic photos and videos. Mild further cuts the contrast, brightness and color settings.

Using the Standard mode, I watched 2001: A Space Odyssey, where the opening "Dawn of Man" sequences showed rich and vibrant colors and just enough detail in the cave shadows. The action was smooth and the sunrise highlights around the pool of water came through vividly, though the overall color balance still leaned too green. But while the M7 may not be the perfect projector for movies, it's surprisingly good and acceptable where portability trumps accuracy.

At 91%, the M7's brightness uniformity was slightly off the pace set by the P6X's 92%. When blasting light, the M7's power consumption topped out at 76.3 watts; it consumed 1 watt at idle. Added together, the M7 has annual estimated expenses of $17 if it's used for eight hours a day and you pay the national average of 13 cents per kilowatt hour of electricity.

With a fan in the back, the projector never got above 98 degrees Fahrenheit. On the other hand, the outboard AC adapter hit a rather hot 130 degrees F. AXXA says a very limited number of adapter samples were found to behave this way and that this is covered by the warranty; you can contact them if you encounter this issue. In Dynamic mode, the projector's fan put out a maximum of 45.1 dBA of noise in a casual measurement taken 36 inches from the exhaust vent. That's on par with the P6X's measured 45.5dBA. AAXA specs the M7's noise level at 30dB in the usual averaged measurement taken in a sound-proof room. 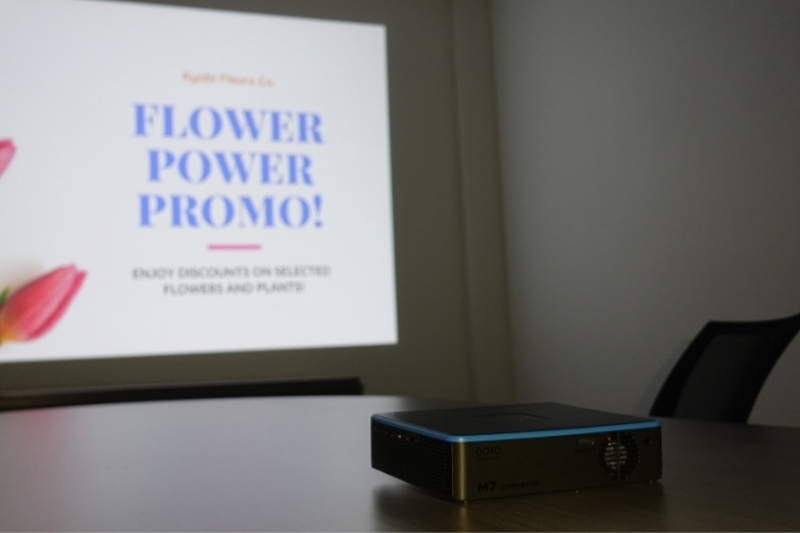