Casio puts the emphasis on teaching with the XJ-S400UN, a projector that's bright enough to light up any classroom yet cuts operating expenses to the bone. With the addition of the optional WiFi adapter, anyone in the class can share their screen, making the XJ-S400UN collaboration central. At $1,949, it has a hefty price tag compared with competitors in its brightness and resolution class, but the XJ-S400UN is so economical that it's worth every penny for a large classroom or small lecture hall. 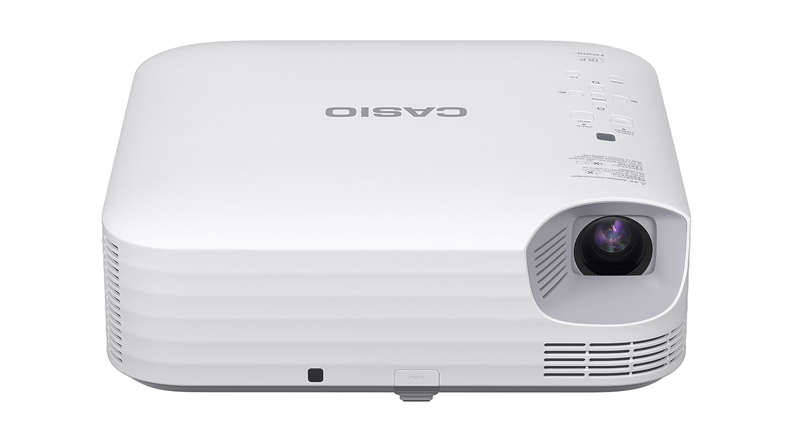 By combining a high-output solid-state illumination engine with low power use and a slew of classroom extras, Casio's XJ-S400UN, the flagship in its new Superior Series, sets the standard for schools. Its $1,949 cost might put it out of reach of many districts and colleges until you realize that it is so efficient it helps pay for itself.

With the ability to put 4,000 lumens on the classroom screen, the XJ-S400UN can allow for lights-on and shades-up lessons. Its color balance may not be perfect and its color brightness falls a bit short compared to some other projectors, but the XJ-S400UN can project a big image.

It's ready for the classroom with a five-year warranty and Casio's Educational Solutions package of management and sharing features. In addition to a variety of teaching templates, using the XJ-S400UN with its optional WiFi adapter pushes classroom collaboration by allowing students and teachers to share their screens.

The XJ-S400UN's light source is a major differentiator and the primary justification for its premium price. Rather than a traditional lamp, the XJ-S400UN uses Casio's LampFree R-Hybrid solid-state light engine. Its blue diode laser, red LED and phosphor wheel combine to cover the full color gamut. The wheel has a dedicated red segment for adding brightness and improving color balance.

Rated at 4,000 lumens and a contrast ratio of 20,000:1, Casio says the lighting element should last for 20,000 hours of use rather than the typical 2,000 or 3,000 hours for conventional mercury vapor lamps. This translates to an estimated lifetime of about 12 years of 8-hour-a-day use over the school year.

Behind the scenes, the system has a WUXGA (1,980 x 1,200) native resolution, 0.67-inch DLP imaging target. Compared to the XGA and SVGA projectors that inhabit most classrooms today, the extra detail should be a welcome step up.

While you can't change the lens, the XJ-S400UN's optics have a sharp uniform focus and 1.7x zoom. Neither, however, are powered; instead there are thumbwheels on the projector's side. Capable of filling a 25-foot screen, the XJ-S400UN can create a 100-inch image from between 9.9- and 16.1 feet, depending on the zoom setting. It should fit in with everything from a mid-sized classroom to a small lecture hall.

Along the back is all the ports a classroom will need with two VGA, two HDMI, and a composite video input along with a VGA output for connecting another projector or display. There are also two USB ports, a micro-USB, and an RS-232 serial control port along with an Ethernet connector. The XJ-S400UN is compatible with Crestron Connected networks.

On top of a robust 16-watt speaker, the XJ-S400UN has something that is increasingly showing up on educational projectors: a microphone input. It worked well with wired and wireless microphones, allowing a teacher to move around the room while still being heard by everyone. 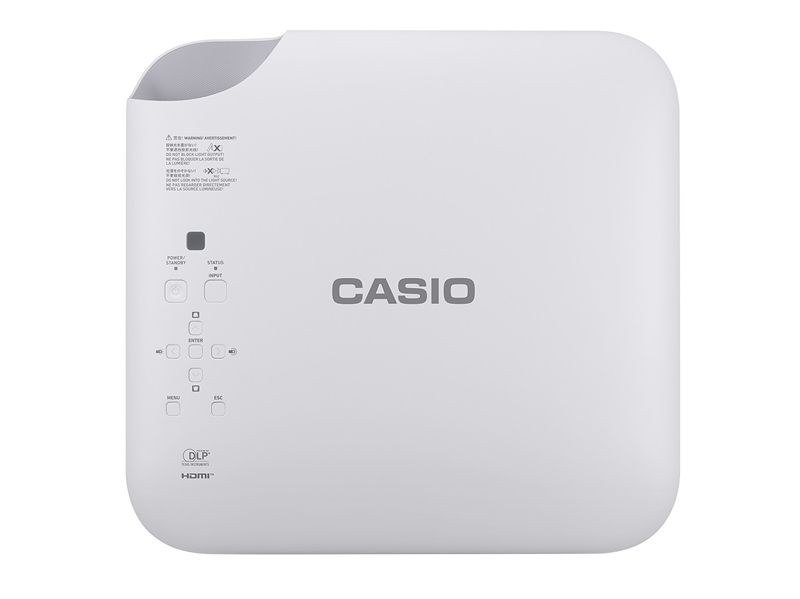 The projector's control panel is simple and straightforward with buttons for power, Menu, source selection and a 4-way control pad. A bonus is the ambient light sensor, which can automatically adjust the XJ-S400UN's output based on the room's environmental light. Turn the lights on and the XJ-S400UN boosts its brightness; close the shades and the output drops.

The XJ-S400UN's remote control is small, light and has a 25-foot range. It's able to adjust just about every aspect of the projector, and has dedicated buttons for volume, keystone correction and the digital zoom. At any point in a lesson, you can start a count-down timer, blank the screen or freeze it.

Casio's standard warranty for the education market is the best in the business and outdoes Epson's three years of coverage for school projectors: five years parts & labor, plus five years or 10,000 hours on the light source. Of course, that's still only half the of the light engine's rated lifetime. Unfortunately, Casio doesn't offer extended warranties. Like other Casio classroom projectors, the white XJ-S400UN has its lens in the corner, rather than the middle, potentially complicating its placement. At 4.5 x 13.4 x 14.1 inches and weighing in at 13 pounds, it's also noticeably larger and about twice as heavy as Epson's Powerlite 990U, a 3,800-lumen, lamp-based competitor. On the other hand, Casio says the XJ-S400UN is actually the smallest solid-state projector in its brightness class, where most of its competitors are full laser models. In any event, it should be easily maneuvered and installed by one person.

Underneath, there are three adjustable feet for setting it up on a table and four attachment points for mounting it on the ceiling or wall. It worked well with generic mounting hardware, and can be aimed straight down if needed. The projector also requires only 1.5-inches of clearance to prevent overheating.

Unlike the ability of some other competitors, including the Sony VPL-CH350, to move the image for perfect placement, the XJ-S400UN lacks mechanical lens shifting. Its automatic keystone correction works with inclinations of up to 30 degrees, but by the time keystone reached a 15-degree angle in our tests, the projector's output dropped by 13 percent.

The XJ-S400UN's built-in test pattern is a big help when aiming and focusing the projector. During start-up and when there's no active source, the projector can show a school logo or other image. It took about a minute to transfer an image from a PC to the projector using its micro-USB port and Casio's Logo Loader app. It works with .bmp images up to 1280 x 800 resolution.

At 1.3-seconds to project an image, the XJ-S400UN is a quick starter that is perfect for schools where teachers and students go from room to room all day. It took just 9.8 seconds for the fan to go off after shutting down.

Among the projector's seven preset color modes, Standard is the brightest but imparts a blue-green tinge to its images, making it okay for presentations and lessons but not for an art history or photography class. It delivered 4,070 ANSI lumens in this mode, just above its 4,000-lumen spec. Like most other single-chip DLP projectors, its color brightness measurement was lower than its white brightness, but measured just 1,770 lumens here—an unusually large drop of more than half. Although color brightness is an area where 3-chip LCD and LCoS projectors excel (by design they deliver equal white and color brightness), this is a less critical specification for most commercial projectors where the need for brightness in high ambient light usually trumps the need for color volume.

Compared with the Standard mode, the XJ-S400UN's Graphics and Theater modes warm up the images and lower output to 2,250- and 2,170-lumens, respectively. The XJ-S400UN's Blackboard mode had a purplish look and registered 1,900 lumens, although Vivid mode gave items a garishly green and yellow appearance and delivered 2,130 lumens. Aimed at viewing medical scans, the Dicom Simulation mode put 1,930 lumens of light on the screen. By far, Natural mode produced the best color balance with lifelike images, more accurate flesh tones, and vibrant yellows; its output was a still-bright 2,930 lumens, making it a nice compromise.

Casio takes the idea of eco power modes to a new level with the remote control's leaf button that offers seven different brightness settings. The lowest level consumes 120-watts versus 211 watts for full output, while lowering the XJ-S400UN's brightness to 1,490 lumens.

While it was operating, the XJ-S400UN kept its cool with a peak temperature of 95 degrees Fahrenheit, and it wasn't a class disrupter with its 42.2dBA of noise (as measured at 36-inches). It's also among the least expensive projectors to operate. If used for 8 hours each school day, its estimated operating expenses come to $30 per year based on the national average cost of electricity at 12 cents per kilowatt-hour. The projector requires neither filter nor lamp changes, potentially saving more than $1,000 over its lifetime.

While it costs an extra $100, the tiny YW-41 WiFi adapter is a must-have for schools. It plugs into the projector's USB port, creates a WiFi access point and allows sharing of displays from iOS devices, Chromebooks and Androids (with Casio's C-Assist app), as well as from PCs and Macs (with the C-Connection app).

There's a Moderator app for the teacher to control which of a classroom's computer displays gets projected. The XJ-S400UN can accommodate up to 40 classroom computers and display any single, two, or four screens at once. Unfortunately, when using the wireless connection there was a slight lag in video response, which Casio says is not unusual. It was more an annoyance and nothing that would interrupt teaching.

There's also software that allows the teacher to control the projector. The XJ-S400UN further includes nine teaching templates that project lines and grids onto a whiteboard for marking up. You can add up to 80 more images, like maps, paintings and polar plots.

The XJ-S400UN's speaker, with its 16-watt amplifier, sounded better and louder than the built-in speakers in most projectors I've heard. It should fill a mid-size classroom (for up to about 40 students) without any help. A larger lecture hall would likely require an external sound system. 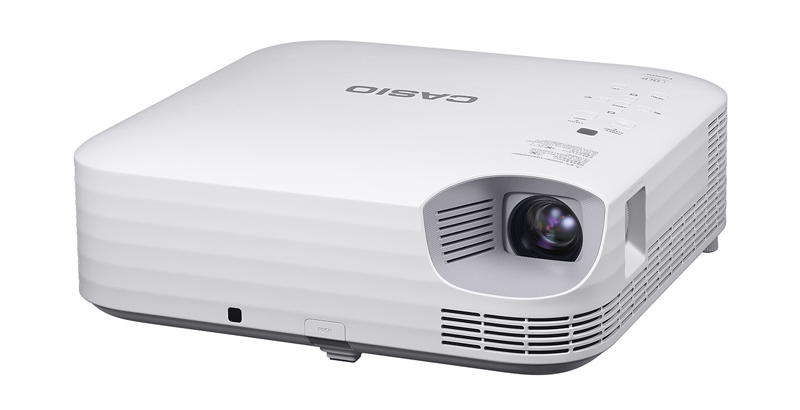 In the final analysis, the solid-state Casio's XJ-S400UN is a masterful combination of high brightness, low operating expenses, and extras that can help teach a generation of students. Add in the WiFi collaboration that can wirelessly mirror classroom computers on the big screen and you have an educational powerhouse. Its low color brightness gives us pause, but as noted, this is a common complaint among DLP projectors and less critical for a classroom projector than it would be for home theater duty.

At $1,949, the XJ-S400UN is pricey for its brightness and resolution—but worth it because it's so efficient that it can help pay for itself with one of the lowest operating costs in its class. It would be penny-wise and pound-foolish to pass it up.

Brightness. Unlike the typical projector that has two or perhaps three lamp or power settings to adjust brightness level and power consumption, the XJ-S400UN has a Light Control option that offers seven graduated brightness settings (plus Off), as well as an optical sensor that can be used to automatically adjust brightness based on the ambient light. When Light Control is set to Off (the brightest setting), users additionally have a Bright option (which prioritizes brightness) or a Normal option (which prioritizes color accuracy).

The Standard color mode, with Light Control set to Off and the Bright priority option active, put out 4,070 ANSI lumens, just over the projector's rated brightness. Switching from the brightest Light Control setting (Off, with Bright priority) to the least bright setting resulted in a 63% drop in light output and an approximately 56% drop in power consumption.

Following are ANSI lumens at each color mode's brightest settings, along with the measured power use.

Fan Noise: Casio officially rates fan noise at 40 dB in the highest power/brightness setting, and 29 dB in its full eco mode. A casual measurement taken at full brightness (High Altitude off) from a position directly in line and 36-inches away from the exhaust vents registered approximately 42 dBA and was of a pitch and volume that would not likely be a distraction in a classroom. High Altitude mode adds more noise, but putting the projector on the ceiling and perhaps 6 feet from students's heads should allow most noise to dissipate in a classroom setting.

For more detailed specifications and connections, check out our Casio XJ-S400UN projector page.