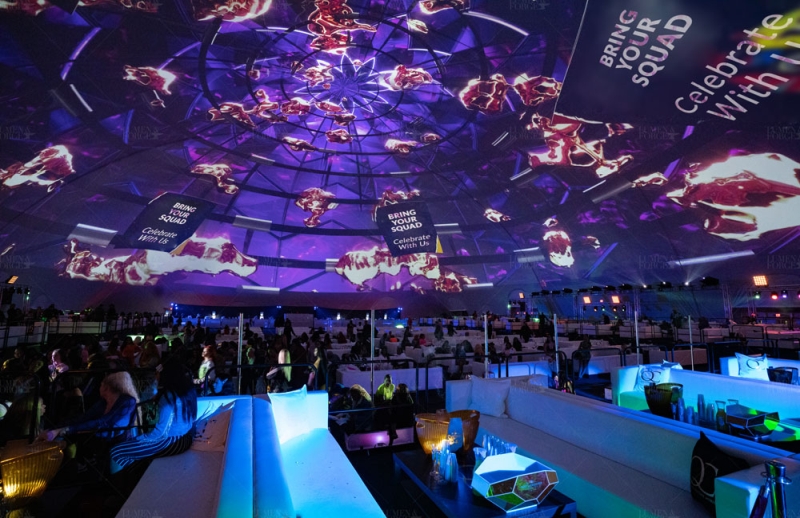 For sports fans in North America, there is no event bigger than the Super Bowl. The culmination of the National Football League (NFL) season, the annual event draws over 100 million viewers worldwide each year. Hosted at the Hard Rock Stadium in Miami Gardens, Florida, last year's 2020 championship game brought in over 60,000 fans in attendance and 200,000 visitors to the city. With such a prodigious amount of people and international spotlight, high-profile show organizer AG Entertainment wanted to create an unforgettable party experience in Miami that would host some of the hottest Hip-Hop and R&B entertainers of today. Creating the largest temporary projection dome ever built, they needed world-class visuals to complement the world-class talent. To accomplish this, Digital Projection's M-Vision Series projectors were selected to make this momentous, high-energy event, one to remember.

A Record-Breaking Design with High-Quality Projection

The challenge of designing this immense space was taken up by dome specialists Lumen & Forge. The team created an immense dome measuring 225ft wide by 175ft long by 55ft high, making it the largest projection surface ever created inside this kind of structure.

While many industry standard projection domes have a hemispherical shape, the one implemented for this project boasted a uniquely oval, or 'pill', shape. Created by Broadwell Airdomes USA, the colossal scale of the structure was dictated by the intended use of the dome, which would host concerts and parties within. The pill shape would also allow for a higher capacity of visitors, while creating optimal placement for the display technology without any interference or viewing restrictions. With such a large surface, a fleet of powerful projectors were required, which led the team to install twenty-four M-Vision Laser 18K projectors from Digital Projection. Lumen & Forge founder Niels Goossens had this to say about the selection, "We needed a lot of projectors - we needed them to be laser illuminated and we needed them to be bright. Digital Projection had it all from price-point, to product quality, to the software to make all the required adjustments."

A Custom Fit for a Unique Challenge

While advantageous from a capacity perspective, the unique shape of the dome venue had major bearings on both camera calibration and content creation. To combat this, Lumen & Forge's exclusive auto-calibration partners at VIOSO were asked to provide a highly advanced calibration rack, which included Lumen & Forge's own Domemaster server, six Datapath Fx4 display controllers, as well as a 7m-high tripod for the calibration camera.

"While Domemaster is the most common format for traditional 180Â° and 360Â° video creation realms, this dome was beyond that specification because of its pill shape," explained Misha Fradin, managing partner at Lumen & Forge. "The content created in that traditional format would have been distorted when projected, and it would have ruined the experience for visitors."

After designing the dome in a 3D space, Lumen & Forge was able to develop content that was placed into VR for testing. Using this method, the 16x9 content was modified to perfectly fit the shape of the dome, altering the calibrations to fit the lens of the camera.

"We couldn't just elongate the image to create an oval, as that would have put too much stress on the sides and the content would have appeared warped," Fradin added. "Typically, the hemispherical dome shape is perfectly fit to the shape of the camera lens. But, since there is no such thing as an oval shaped lens, we had to make the view work for us. The calibration was performed live from the view of the circular lens, and in order to fit the oval shape of the dome, we used the map from the 3D rendering of the dome. This hybrid combination of real and virtual made it possible to achieve a perfect image." 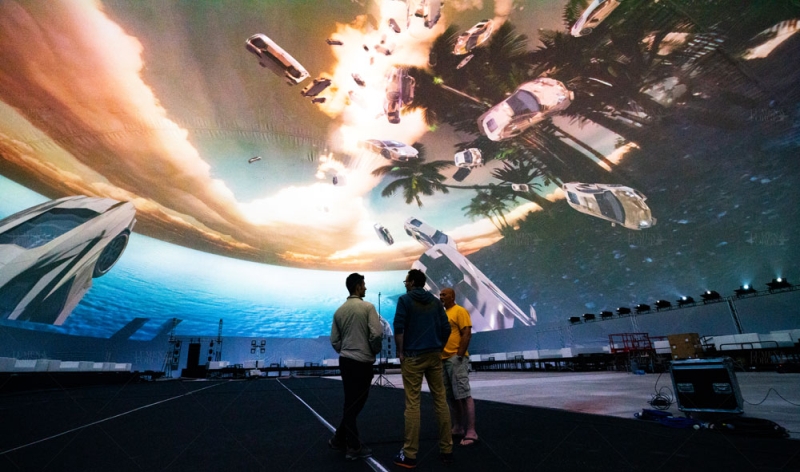 Coming Down to the Wire

Lumen & Forge had only two months to design the projection study and specify the technical aspects, and by the set-up time in late January, the construction of the dome was already ongoing. This meant that Lumen & Forge's first opportunity to operate the calibration was a mere three days before opening. It could also only take place at night, as the field operations team was still completing the dome's construction.

The teams only had one night for the final calibration, in which the size, scope and shape of the dome would again need to be reconsidered. "It was only by working closely with our exclusive auto-calibration partners at VIOSO and the easy-to-use DP projectors that we overcame the issues and had a major success in both the quality of calibration and warping of the image for the opening night," Fradin said.

Powered by the fleet of M-Vision 18K Laser projectors, the crystal clear 6k x 4k streaming content was distributed through the 24-channel Domemaster to make some truly astounding immersive visuals. The effect of the projection dome was an immediate game-changer. Goossens goes on to describe the guests' reactions in saying, "When all was said and done, the experience was jaw-dropping. The minute the guests walked in, they were floored. The scale of it all, the clarity and content, the mood - everyone was just really happy to be a part of it!"

With a capacity of 7,500 guests, the VIP event boasted top-of-the-line concert audio to match the high-quality projection surface - creating an amazing experience for all. Throughout the weekend, this unique, premier ticket atmosphere hosted parties and concerts featuring headliner talent such as Cardi B, Diddy, Future, Jeezy, Lil Baby, Meek Mill, Gucci Mane, and Fabolous.

Comments (1) Post a Comment
Bob Rapoport Posted Feb 1, 2021 12:36 PM PST
I wish the Tampa Bay Rays would adopt this kind of projection at Tropicana Field in St. Petersburg, they have a dome roof that would be an ideal projection surface and it would increase the entertainment value of going to live games once the pandemic is over. They complain about low attendance but dont know what to do about it. Seems like this is worth a try.