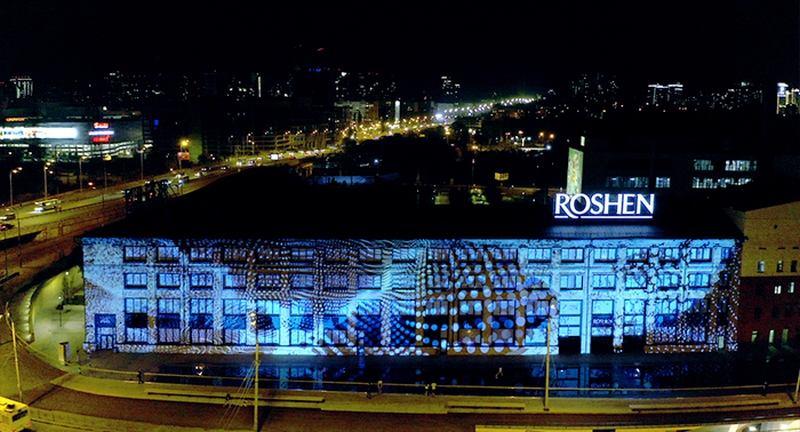 A total of 20 Digital Projection M-Vision Laser 21000 units have been used as part of a multimedia facelift for the Roshen confectionary factory in Kiev, Ukraine; one of Eastern Europe's most recognized institutions.

"We designed the lighting, mapping and sound systems together with Peutz and The Space Factory, as well as fountain designer Philippe Carton," said Lucas. "We also assumed the artistic direction of the mapping (both form and content) and coordinated the audio with musician and composer, Yi-Ping Yang."

Les Ãclaireurs was invited to begin work on the installation in September 2016, alongside Lyon-based landscape agency and regular partner, In Situ.

"We had to conceive all of the projection mapping and general lighting of the site first, with the majority of our focus being the fountains, the facades, and the ice rink," said Lucas. "The project then evolved when we were asked to oversee the complete management of all these elements, as well as designing seven fountain show programes with the original music. We also had to design a series of programes that could build the ambience of the site by using a combination of fountain animations, light animations, and musical loops." 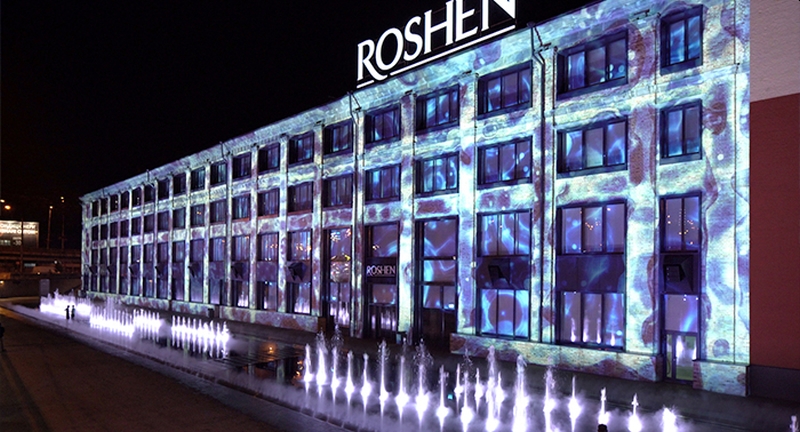 As well as the extensive catalogue of content Les Ãclaireurs created, the client wanted another distinct show to be entrusted to Kiev-based company, Front Pictures, to ensure diversity of approach and the inclusion of local creativity.

To ensure that the projection mapping aspect of this ambitious installation lived up to the high standards set by the client, the team conducted an exhaustive analysis of the technology available; ultimately deciding that Digital Projection was the right choice across the board.

"The high performance of the laser sources, combined with the compactness of the projectors, and the quality to price ratio made us prefer Digital Projection by far," said Lucas. "The challenge was integrating the products into a balcony, which was erected to ensure that the nuts and bolts of the project remained discreet.

"We looked first at Digital Projection's M-Vision Laser 18K units, eventually opting for the M-Vision Laser 21000's," said Lucas. "The client and the artists involved were all impressed by the power of the projectors, especially since the site is particularly exposed to light pollution from the nearby road."

The M-Vision Laser 21000 projectors were the ideal choice thanks to their ColorBoost+ Red Laser technology, where red lasers are combined with the traditional laser phosphor illumination, bring the most realistic and saturated colors to this 1-Chip DLP Projector. Coupled with its intelligent processing brings the color performance ever closer to that of a 3-Chip DLP projector.

Although the city of Kiev has resolved to address this situation, les Ã©claireurs and the rest of the team could rest assured that the M-Vision units had the brightness and definition to show their content at its best no matter what happens.

"We also appreciated the reliability of the Digital Projection units," continued Lucas. "They are combined in an AMX monitoring / management system, which controls the proper functioning of all the equipment and gives us feedback on the whole system with hierarchical sets of alerts: opening of the projector boxes, internal temperature, status of the fibre optic communication, status of the IP and DMX switches, control of the blinds and lighting of the site before the shows, and so on." 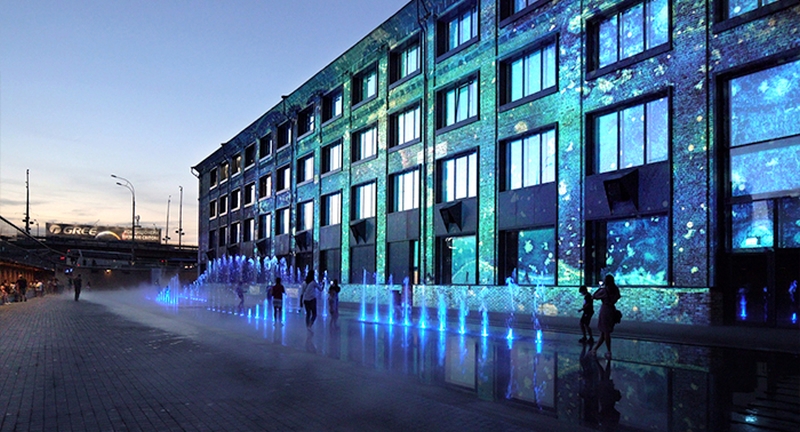 The 20 x M-Vision Laser 21000 projectors themselves were installed in March 2020, under a balcony specifically designed for this purpose. The units are enclosed in boxes specially developed by Audipak, with the whole bank being concealed by a set of acoustically treated wooden gratings.

"Although the install went well overall, we did experience a few thermal challenges due to the shape of the balcony," said Lucas. "In order to help the Audipak boxes cool down the devices, Sound House Pro fitted an external remote ventilation system that filters fresh air into the boxes. These air intakes maintain the discrete aesthetic though, as they are concealed in the balcony between the units."

The original concept for the projection mapping content came from Lucas Goy / les Ã©claireurs, who wanted to focus on the idea of ice as a medium. Having already collaborated with video artist Guillaume Marmin and musician and composer Yi-Ping Yang in the past, the three of them worked together to create the 'Icescapes' portion of the show that can be seen now, projected onto the faÃ§ade of the factory.

"I also created the content for the fountains and lights, while Front Pictures is currently developing several small shows for the site, including a big bell on the faÃ§ade and a show called 'Creativity"," said Lucas.

The content is created using Autodesk 3ds Max and Adobe After Effects at 12K 60Hz and driven by VIOSO Anystation Media servers installed with AV Stumpfl PIXERA software. VIOSO technology was also used for projection calibration / auto-recalibration, as well as full show control. The fountain light show is then driven by software developed by IMMOLAS for fountain specialist, Imperia Vody.

"As we are talking about a 100m x 16m building, the 'sweet spot' for projectors would be around 80m away," said VIOSO France's Etienne Servant. "We only had 15-20m of space for the audience, cameras, and projectors, so the challenge was how to blend and warp 20 projectors with short throw lenses. We ended up using five VIOSO calibration cameras, which allowed us to automate the process and offer an awesome result with easy recalibration. Five custom-made Anystation Media Servers were also installed for playback and to ensure that all hardware and software receives the scenarios imagined by Lucas Goy." 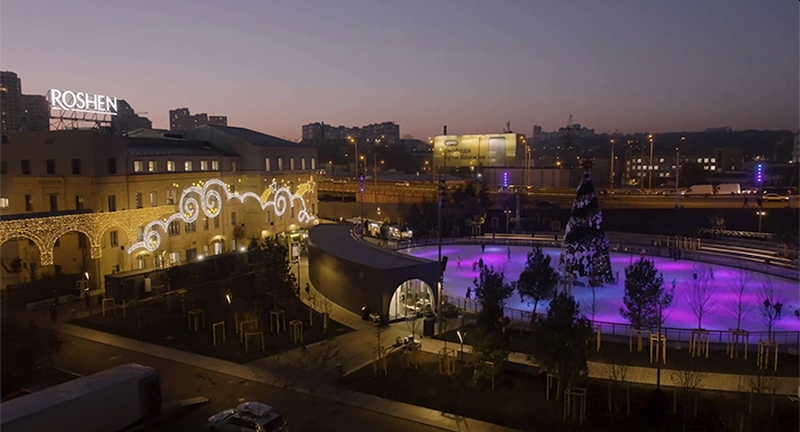 The calibration cameras were linked to the same fiber network that controlled the projectors, lighting, and show control.

"We had to use a lot of fiber optic cabling due to the distance between the control room and the video projectors," explained Lucas. "The media is output via HDMI from the servers and then encoded by EXTRON modules to the fiber optic cable. In the balcony, we have hidden waterproof ventilated cabinets with other EXTRON modules that decode the signal."

During the installation, Digital Projection helped Lucas' team with the choice of optics and advised them on some of the intricacies of the equipment itself. "We received logistical help for on-site tests, and for optical corrections during the construction period," Lucas added.

As a permanent installation, the projection mapping shows can be seen at the Roshen factory every night, while other winter and summer programs are currently being designed for use in the future.