The Epson PowerLite L200SW classroom projector is designed primarily for pairing with pre-existing interactive whiteboard installations, though it could also serve in conference rooms. At large image sizes, small fonts and fine detail aren't quite as crisp as you'd expect for its rated resolution, but it delivers vibrant color and high enough brightness to stand up to ambient light, and brings the value of a long-life laser engine at a highly affordable cost. Epson's Brighter Futures discount pricing and extended 5-year warranty for schools is a plus. 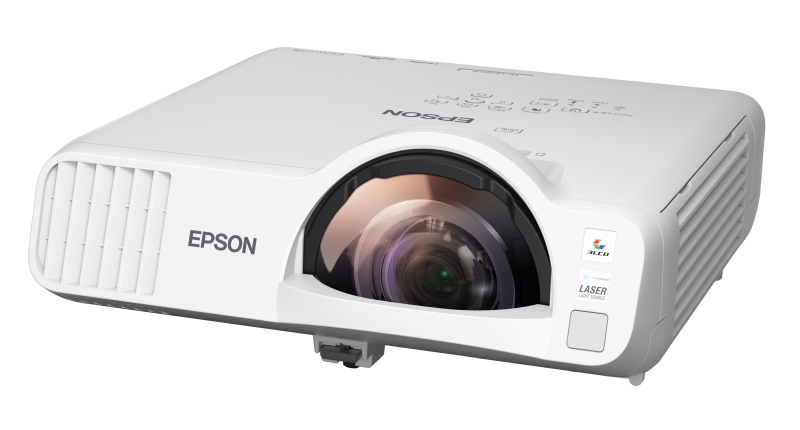 Epson designed the PowerLite L200SW laser projector as a classroom projector, primarily for pairing with previously-installed interactive whiteboards. With its short-throw lens, it can be used to retrofit aging lamp technology in those setups with the high brightness and cost-effectiveness of laser. Not surprisingly, it boasts some features that are particularly useful for learning environments, such as the built-in ability to show input from up to four sources simultaneously. But this projector's compact size and attractive price—$1,349 MSRP and as little as $1,149 for schools and educators through Epson's Brighter Future program—wouldn't rule out its use in a conference room. If you need a bright 1280x800 (WXGA) projector, the L200SW should be on your radar.

The L200SW's core features come from its 3LCD design paired with a laser-phosphor light source. The three 1280x800 LCD chips guarantee both a rainbow artifact-free image and a match between white brightness and color brightness. The projector is rated at 3,800 lumens, but as with many Epson models, the rating was on the conservative side for our sample. I measured it at about 10 percent higher, which is just enough to notice.

The laser life ranges from 20,000 hours in Normal (full power) mode to 30,000 hours in Extended mode. As with most solid-state light sources, it's meant to last the life of the projector. Not having to buy replacement lamps can make the total cost of ownership lower than for equivalent lamp-based models that have a lower initial cost.

Note also that, as with many laser projectors, you can set a custom power level. The settings range from 100 (equivalent to Normal mode) to 70 (equivalent to Extended) in increments of 1. Lower the brightness to just what you need, and you also lower power use, and electricity costs with it, while increasing the laser's lifetime.

The built-in split screen feature gets extra points for being easy to use. A dedicated button on the remote brings up a screen for choosing between a two-way and four-way split, after which a single press on the Menu button takes you to a screen where you can easily choose which input goes in which half or quarter of the screen. You can also choose which source to accept audio from. Notable among the input options is Screen Mirroring, for a device directly connected to the projector through the built-in Wi-Fi.

Educators will welcome the L200SW's support for Epson's free, downloadable iProjection software, which consists of an app you can download to individual devices plus control software a teacher can run on a computer. The Moderator feature within iProjection lets you manage as many as 50 connected devices, to choose which two or four show on screen. 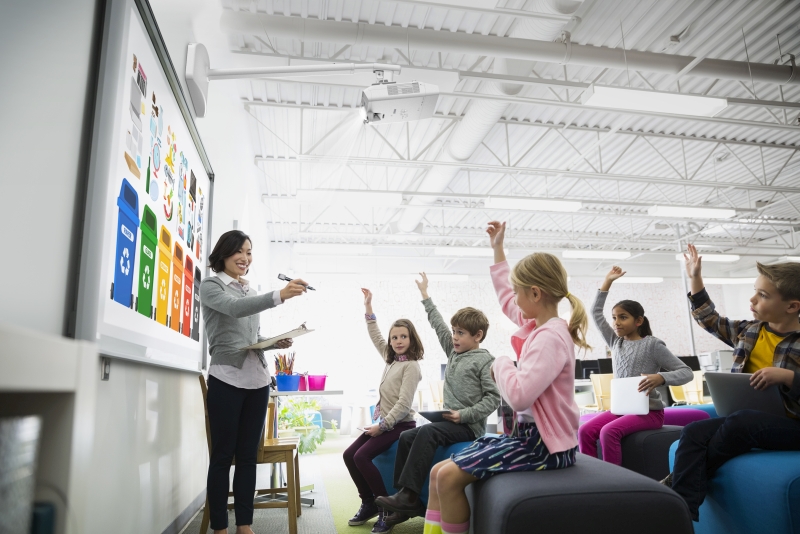 The L200SW also has some sophisticated features that are shared with the company's more specialized signage projectors but won't likely come into play in classroom environments, including built-in edge blending for multi-projector displays and support for 360-degree orientation in any axis. There's even a set of built-in mattes and filters that would let you, for example, create a spotlight with a circle-shaped matte, define the size of the matte, and choose a filter color. You can also create custom mattes for more creative displays.

Setup is straightforward. The lens offset is designed for placing the projector just below the bottom edge of the screen on a table or just above the top edge, using a short-throw wall mount or a ceiling mount.

Unlike most short throw models, the L200SW offers a zoom, which Epson refers to as having wide angle and telephoto settings. However the zoom is strictly digital, which makes it best avoided. Anything other than the extreme "wide-angle" setting uses only part of the imaging chips, necessarily blocking some light to lower brightness and potentially adding artifacts to some images as well.

For the bulk of my testing, I set the projector up with a 93-inch diagonal 16:10 image at a throw distance of 3.1 feet. (For the throw distance for your screen size see the Epson PowerLite L200SW projection calculator.)

Note that Epson recommends a maximum 120-inch diagonal 16:10 image, based on the lens's capabilities. At larger image sizes, chromatic aberration hurts image sharpness. Even at 93 inches, the image seemed a little soft focus, making fine detail and text in word processing documents a little harder to make out than I expect for the 1280x800 resolution. However, I did not see the same problem when I moved the projector closer to the screen, for an 82-inch image. 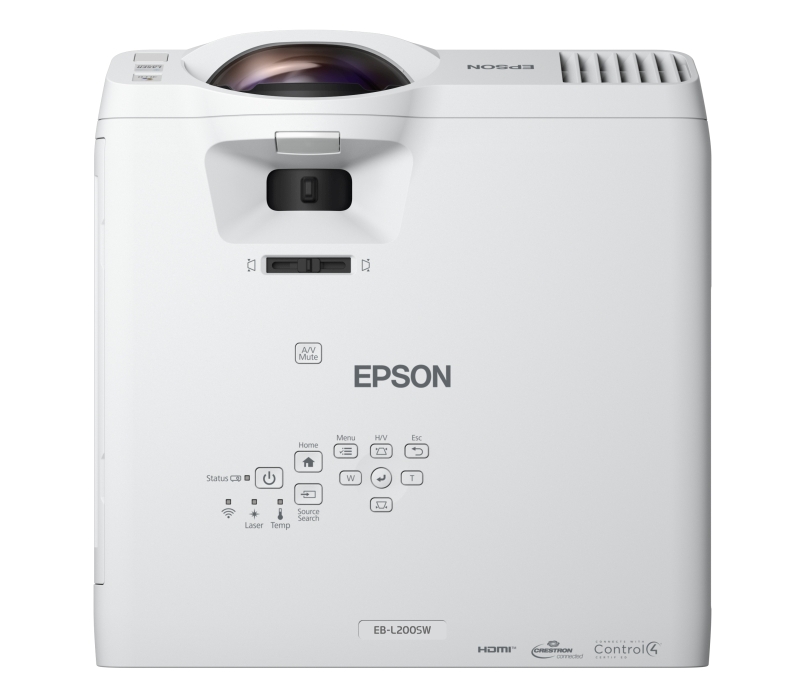 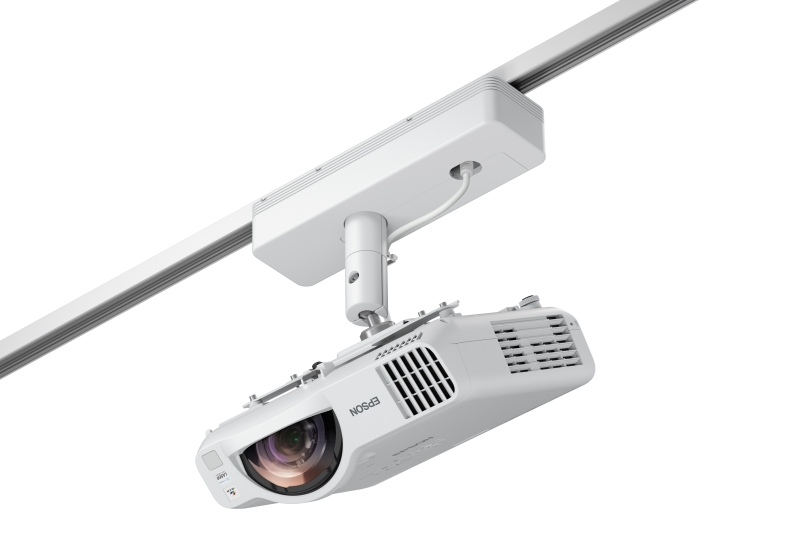 The differences between the modes were minor enough that the same overall description applies to all six. For graphics, the colors were suitably eye-catching and vibrant. For video and movies, they were appropriately saturated, while memory colors—like green grass, blue sky, and flesh tones—were well within the realm of realistic. All modes also shared noticeably low contrast for film and video, even with Dynamic Contrast on. However, color accuracy for presentations, video, and movies was more than acceptable for classroom use.

Despite the overall similarity between color modes, there were also some differences. Dynamic and Multi-Projection modes were a little green shifted relative to the others, although not by enough to be obvious without switching between modes. Similarly, Blackboard mode was a little red-shifted. The red shift was noticeable—and therefore undesirable—in grayscale images, but actually helped photorealistic images by making skin tones look more realistic.

I also saw a difference in how well each mode handled the subtle gradations that give a sense of three dimensionality to rounded objects like close-ups of faces. None stand out as particularly good or bad on this score, but Blackboard and sRGB modes did the best job in the group, and Cinema was just a smidge behind.

With such minor difference in image quality for graphics, text, and even photorealistic images, there is little reason to choose one mode over the others for most purposes, other than choosing one with the right brightness for the ambient light level. For watching an occasional longer video or full length movie, however, Blackboard is the preferred choice because of its slightly more realistic looking skin tones, with Cinema and Movie equally good second best choices if you need higher brightness. 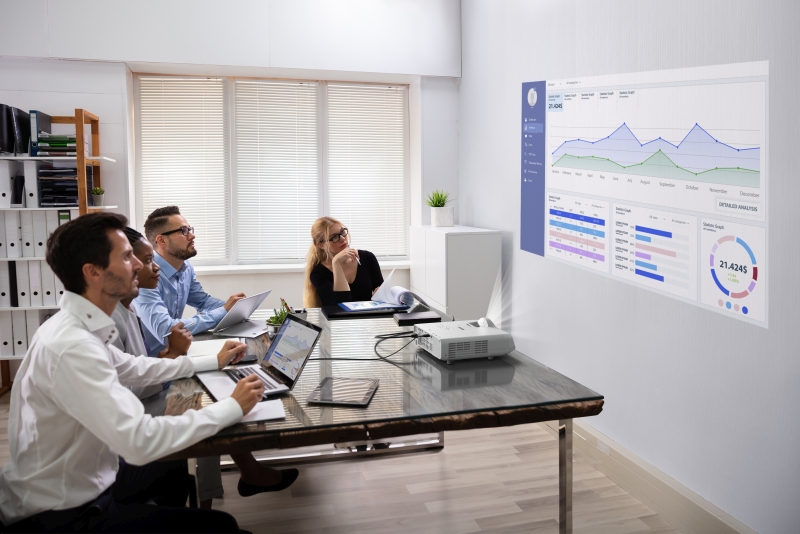 Note too that, should you feel the need to improve on the default settings, the menus offer a full set of options for adjusting gamma and color, including individual settings for hue, saturation, and brightness for each primary and secondary color.

1080p/SDR Viewing. Image quality for video and films is best described as highly watchable, which is better than some projectors can manage. Color accuracy was more than acceptable by most people's standards, and the low contrast wasn't obvious with the level of ambient light typical for a classroom.

At lower light levels—where the black level was brighter than the ambient light bouncing off an unlit screen—the low contrast sometimes gave the image an almost foggy look. However, most people would consider the quality good enough for watching a full-length movie in a classroom setting on an occasional basis even at those light levels—the key word being occasional and the assumption being they'd make some allowances in a classroom for image quality. Brightly lit live and recorded video—like a talk show or news—faired better, thanks to less opportunity to spot poor contrast and lost shadow detail. It also helps that as a 3LCD projector, the L200SW cannot show rainbow artifacts. 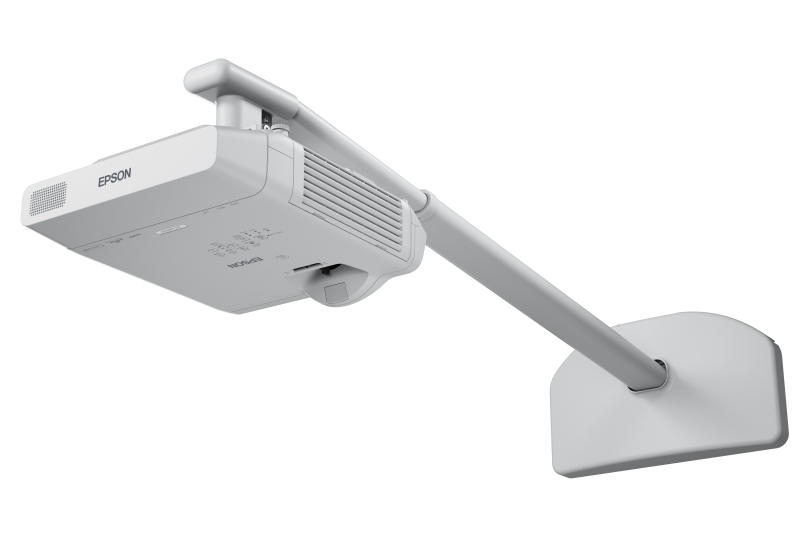 The PowerLite L200SW is a strong candidate for anyone who needs a 1280x800 resolution, short-throw projector and also wants a light source that will last the life of the projector. The support for network management and the ability to copy settings from one projector to another make it an even better choice for schools that need multiple projectors and an easy way to manage them.

Beyond these basics, the built-in support for screen mirroring and the easy-to-use split screen feature are nice extras for classrooms or even business meetings with a need to share information sitting on more than one person's device. For classroom use, the support for managing up to 50 individual devices complements the split screen feature nicely.

The tendency of the short throw lens to lose crispness with larger image size is a minor shortcoming that only affects fine detail. Even with 93-inch images, 10-point text was still readable. Just as important is that the L200SW delivered vibrant color for graphics and highly watchable video and film. As a total package—and whether you need the network support or split screen features or not—if you want 1200x800 resolution combined with the advantages of a laser light source, the Epson PowerLite L200SW is a solid choice.

Brightness. For each picture mode the brightness measurements in Normal, Quiet, and Extended power modes were as follows:

The L200SW offers a digital zoom only. There is no optical zoom.

Fan Noise: Epson rates the L200SW's fan noise at 36 dB in Normal mode, and 26 dB in Extended mode. Even in Extended mode, it's loud enough to hear from anywhere in a medium size classroom or conference room in a quiet moment, but no more than typical for comparable laser-based projectors.

Both volume and pitch are enough higher in High Altitude mode that some may want to consider some sort of acoustic isolation even in Extended power mode. However few people will need to deal with this issue, since Epson recommends using High Altitude mode at 7,500 feet and above.

The Epson PowerLite L200SW is also sold outside of the United States of America as the Epson EB-L200SW. Some specifications may be slightly different. Check with Epson for complete specifications.