Two new business DLP laser projectors from LG have been released—the ProBeam BU60PST and ProBeam BF60PST. At 6,000 ANSI lumens, they are the brightest projectors that LG has ever produced.

The ProBeam BU60PST has a native 4K resolution (3840x2160) by using XPR technology—also known as pixel shifting—found on many 4K DLP projectors. A quick search on the ProjectorCentral projector database shows that the BU60PST, with its permanently attached lens and a street price of $4,999, is the by far the least expensive 6,000-lumen laser projector in current production. Others cost considerably more to start and require the purchase of a separate lens. With a footprint of 6.1 x 14.6 x 12.8 inches (HWD) and a weight of only 21.4 pounds, the BU60PST is also the smallest and lightest 6,000 lumen 4K projector in our database.

Alongside the BU60PST is the ProBeam BF60PST, a WUXGA (1920x1200) 16:10 aspect ratio projector that can be found for $3,499 with otherwise almost identical specs to the BU60PST (although it weighs one pound less). Both have a 1.6x manual zoom and can project an image ranging from a 40- to 300-inch diagonal from a distance between 9.4 and 15.2 feet. They have a horizontal lens shift of Â± 20% and a vertical lens shift of Â± 50%. The BU60PST has a 12-point keystone adjustment, while the BF60PST uses a four-corner keystone adjustment.

The laser light source has a life of up to 20,000 hours and requires minimal maintenance over the life of the projector. Both projectors support HDR10 signals. 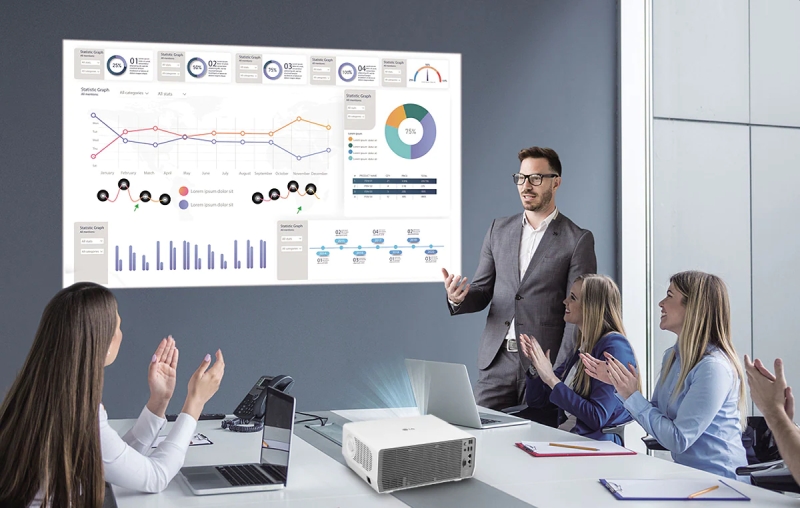 Wired connectivity consists of two HDMI with HDCP 2.2, HDBaseT via RJ-45, a 3.5mm audio out, and RS-232C for IP control. The ProBeam BU60PST and ProBeam BF60PST both support Bluetooth connectivity, will wirelessly share content with iOS and Android devices, and can screen share with a device that supports Miracast. They both run on the webOS 4.5 platform and interface and include an integrated web browser.