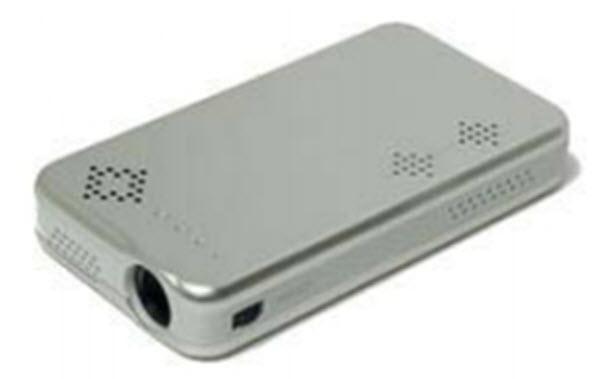 The LCOS-based Ray pocket projector from Ray Displays offers a VGA (640 x 480) resolution, a 7 to 10 lumen brightness rating, and a lower price than the competition, at $200 street (the projector is currently available only at Fry's). The low price goes hand in hand with minimal features, however. The projector doesn't include such conveniences as the ability to read files from an internal memory or memory cards, for example. It also lacks any way to connect to a computer. On the other hand, it comes with an assortment of cables that connect to a variety of video devices, making it a potentially good companion for cell phones, cameras, iPods, and the like.

Low Price for VGA resolution The projector's low price is its strongest feature. Not only is this one of the least expensive projectors available, it combines the low price with full VGA (640 by 480) resolution. Most other similarly priced projectors are half VGA (480 x 320).

Rainbow Free. Unlike most pocket projectors, the Ray projector doesn't use a sequential red-green-blue LED light source for its primary colors. Instead, it uses a white LED along with red, green, and blue filters on the LCOS chip. Sequential light sources depend on the human visual system to integrate the colors over time, which can lead to light areas on the screen breaking up into little red-green-blue rainbows if you move your eye or an object moves on screen. Using a white LED and filters to show red, green, and blue simultaneously eliminates any possibility of this color breakup.

Good Connectivity for Video Sources. Although the Ray projector has no way to plug into a computer (unless you have a composite video output on the PC), and it offers only one connector -- a 2.5-mm miniplug audio-video input -- it comes with cables and adaptors that will let you connect to a variety of video sources.

Three of the four cables offer connectors that will, between them, plug into an iPod, Zune, Archos, Cowon, and Zen Vision, among other choices. The fourth ends in a set of RCA plugs that can connect to any equipment that uses RCA jacks for composite video and stereo audio output.

In addition, Ray Displays supplies an RCA-coupler -- three gender changers tied together -- so you can plug the cable from the projector into one side, and another cable going to a video source into the other. The coupler is particularly handy for video sources like cameras, which have non-standard video connectors and typically come with their own cable to plug into the camera on one end and an RCA video input on the other.

Includes Tripod for Easily Adjustable Image Height. Adjusting image height is a potential problem for pocket projectors. The Ray projector addresses the issue by coming with a small tripod with 4-inch flexible legs. The tripod screws into the bottom of the projector and makes it easy to aim the projector up or down, as needed.

Reasonably Small. Some pocket projectors are bigger than others. The Ray projector is on the small end of the scale, at .7- x 2.3- x 4.4-inches and 5.5 ounces -- about the size and weight of a smartphone.

Long recharge time. Recharge time for the battery is an unusually long 12 hours. According to Ray Displays, however, this is a worst case maximum. In most situations, it should fully recharge in a more reasonable 7 hours or less.

No VGA connection. The lack of a VGA connector makes the Ray projector hard to use for presentations, since you would have to convert the presentations to JPG files and then move the files to a video device. So although you can use the projector for business presentations, it's much better suited to consumer applications, like showing photos or video.

Hard to focus. Most pocket projectors are hard to focus, but the Ray projector is harder than most. The focus thumbwheel is hard to get moving, and doesn't have much room to move from one extreme to the other, a combination that makes it easy to move past the best focus position. On the other hand, it's not hard to get the projector into good enough focus to be usable. Ray Displays says it's aware of this problem and is looking into ways to address it.

Low Brightness. We measured the Ray projector at 7 lumens, matching the low end of its 7 to 10 lumen rating. Keep in mind that because of the way the human visual system perceives brightness, a 7 lumen projector isn't much dimmer than a 10 or 15 lumen projector, although it's enough of a difference to be noticeable. For any given image size, the Ray projector simply won't throw as bright an image as most other projectors.

Low Volume. The Ray projector offers reasonably good audio quality, but, like most pocket projectors, it's not very loud. If you want to watch a video clip or otherwise listen to sound, you either need to sit right next to the projector and hope for little to no ambient noise, or make sure you have a more capable sound system available.

Image quality for pocket projectors in general is best described as usable, but with lots of room for improvement. The Ray projector is no exception. It did a reasonably good job on presentation slides converted to JPG format, but colors were a little dull, and yellow was more of a mustard color than bright yellow. With photos and video it tended to lose detail based on shading in dark areas, but it handled motion without obvious artifacts.

One unusual issue is a burn-in effect. If you let a menu show on screen for a minute or so, and then show a movie or still images, the menu text will show as a ghost image. How long it takes to disappear depends on how long you left it on screen to begin with. This burn-in effect could be an issue for viewing images like photos or presentation slides when you want to spend some time looking at each. It also means you need to avoid letting menus sit onscreen for any length of time.

Ultimately, the Ray projector is best understood as the value choice, with limited features and a budget price. Without a VGA connection option, it's not well suited to business presentations. However, the combination of the battery life, the assortment of cables for various video sources, and the affordable price make it a more than reasonable choice if you want to show images at a larger size than the cramped, built-in screen on your cell phone or media player.

Comments (2) Post a Comment
chris Posted Feb 23, 2010 5:21 PM PST
I don't understand how a single led with red, blue and green color filters can simulultaneously display a color image. I see how sequential works with the image integrated by the brain. So how can you use a single lcos imager and just three filters (with a solo light source)for a full color display? Also,why do lcd projectors use the difficult to align three lcd image chips?
beave Posted Jun 23, 2010 10:20 AM PST
All modern projectors use sequentially flashing lights in one form or another.The rainbow effect is caused by a spinning wheel with colored filter.If the wheel does not spin fast enough ,and there is not enough segments you get the rainbow effect.Plus you have completely confused me.You say this projector doesn't have a spinning wheel. How does this projector produce the three colors with only one chip??