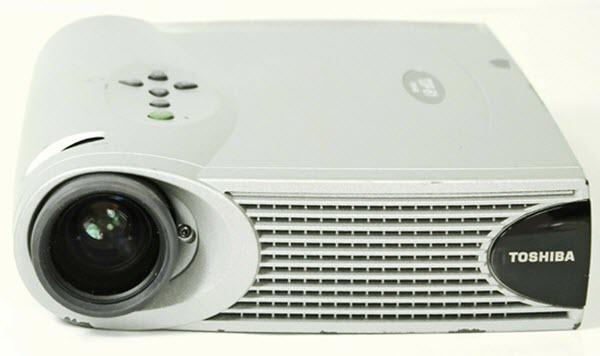 Toshiba has always been creative and aggressive in its approach to projector marketing. This has often led to some excellent price/performance offerings, and exciting times at industry conventions. At first glance, Toshiba's announcement this week of the 4.8 lb. TDP-B1 looks like another bold move. But let's take a moment to put it in perspective.

Any new sub-5 lb projector gets attention these days, and the TDP-B1 will certainly get its share. However, it is important for consumers to understand what Toshiba has done here. First, if the TDP-B1 has a vaguely familiar look, it may be because the unit is manufactured by InFocus, and marketed under the InFocus label as the LP330 Dragonfly. Furthermore, Toshiba is the third remarketer to bring this product to market. It has already appeared as the Kodak DP2000, and the Boxlight XD-5m.So the Dragonfly is making the rounds these days under many labels.

Relabeling goes on all the time in this industry. So the relabeling by itself is not news, although it is rare to find a Japanese manufacturer remarketing an American-built product. What really is different in Toshiba's latest announcement is that the TDP-B1 will apparently be sold only as part of a bundled package along with one of their notebook computers, the Tecra or the Portege. Thus no separate MSRP for the projector has been announced. If you want to buy this projector with a Toshiba label on it, you must buy one of their notebooks along with it.

Toshiba's marketing strategy here is a bitpuzzling. First, they have precluded the sale of the TDP-B1 to anyone whoalready has a notebook computer and doesn't want to invest in another one just yet. It also precludes its sale to anyone who wants to buy a notebook from any maker other than Toshiba. Now, if the TDP-B1 was indeed a unique Toshiba product, the bundle might have some leverage with consumers to move more notebooks. But since it isn't, the marketing advantage is somewhat of a mystery.

Toshiba's announcement quotes a bundled price of the TDP-B1 and the Portege 3110CT notebook computer at $8,298. Is that a good price? Well, the current selling price of the 3110CT by itself is about $2,200, which means that the effective price of the projector component of this bundle is about $6,100 in round numbers.

By comparison, at this writing, street prices for the InFocus LP330 are running around $5,900. Also, Kodak is selling the DP2000 direct through its website at an MSRP of $6,295, and dealers are offering it for about $5,900 as well. So Toshiba's pricing looks about par for the market at this time. If you can get about three hundred bucks off Toshiba's bundle price, you will be right at the average street price you could expect to pay for the two items if you were to purchase them independently.

Now there may be a lot of good reasons to buy from Toshiba. They offer 24 hour/7 day support, and they have a good reputation for quality service. You may have a good relationship with a Toshiba dealer who has given you advice, assistance, and support in the past. These are important factors in choosing a product and a supplier. Price is not everything when it comes to buying a projector.

However, if you really want a projector just like the TDP-B1, and (a) you already have a notebook computer and don't want to buy another one, or (b) you want to get a different notebook than those offered by Toshiba, you have several alternative sources that we are aware of. We will be curious to see how long a bundling strategy like this can survive in a market that offers buyers so many different sources for acquiring essentially the same products.

For more detailed specifications and connections, check out our Toshiba TDP-B1 projector page.