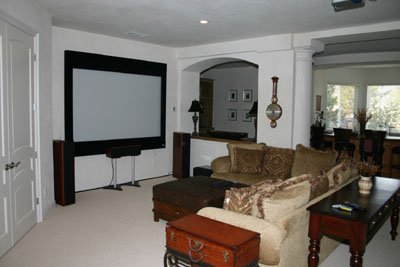 The goal of this theater project was to put together the best possible set of components for $10,000.

The parts used were:

Overall I am very impressed with the quality of this system. I consider this a mid-range system with maximum value for the money. In the past, I have been involved in high-end audio and video and have come to the realization that high-end systems rarely deliver good value. In order to get a noticeable improvement in quality one would need to spend two or three times the price.

The most controversial part of this installation is the vertical masking system, which is fairly rare in low to mid-range home theater applications. My thinking on this is that the fixed screen masking systems are fairly well priced compared to the retractable screen systems and that the screen would likely be a lasting investment. The screen in this case actually costs more than the projector. I rationalize this because I plan on replacing the projector in the next few years with a higher resolution one as prices come down.

The audio quality of this system is outstanding. In the past I purchased a $35,000 system using Meridian components, a Mark Levinson Amp and Wilson Audio Watt/Puppies. The new $3600 system sounds almost as good at one tenth the price. (Anyone want to buy some slightly used Watt/Puppies?) I give a big thumbs up to Axiom Audio

My biggest complaint with this system is the lack of a DVI connector on the projector. Due to the relatively long video cable lengths, interference affects analog video in a visible way. I did run 3 extra cat5 cables so that I can upgrade to a DVI interface when I get another projector.

Installation was fairly straight forward, the biggest problem being the projector cable runs. In order to run all the cables without opening up the walls, I pulled up the carpet in the room above and cut into the subfloor. This method kept the mess fairly low, but you do want to try and avoid cutting the subfloor in high traffic areas, or you may get squeaks.

As to the decision of 4x3 versus 16x9, I am very happy so far. Many of the programs I watch on TV are 4x3 and the masking system can adjust to any wide screen format. My only concern is what manufacturers will do in the future. If all good future projectors are 16x9 then I may regret the choice, but if the 4x3 JVC DLA-SX21U is any indication of the future then I think I will be very happy.