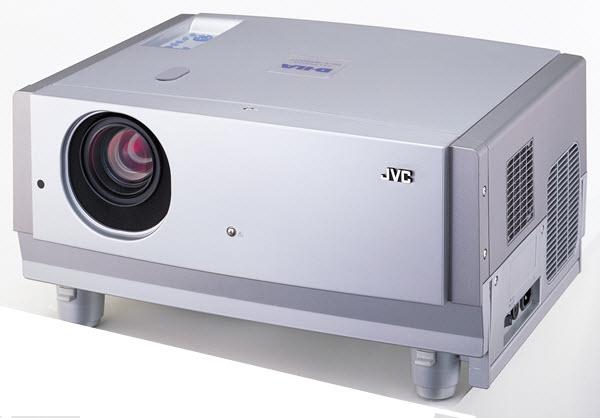 Subscribe
Evan Powell
SHARE
In This Review
Evan Powell
IN THIS REVIEW
Evan Powell
JVC DLA-G150CL SXGA+ D-ILA Projector
Price
$17,495 MSRP Discontinued
JVC brought their new DLA-G150CL by and set it up for a few days this week, and gave us the opportunity to put it through a few paces. This was a quick look, and we did not have time to complete a full review. But I'd like to report what we did see. Because if you are seeking the ultimate video experience and are willing to pay premium dollars for it (in the $15,000 to $20,000 range depending on lens options), the DLA-G150CL is a super-high performance option you will not want to overlook.

The G150 is a high resolution WSXGA-class (1365x1024) projector. It is targeted toward specialized professional markets where acute detail resolution and highly accurate color reproduction are mandatory performance criteria. It is used in medical school classrooms and video post-production facilities where virtually perfect video reproduction is a must. But its video capabilities also make it ideal for high-end home theater as well.

The G150's light engine features three 0.9" D-ILA chips (Direct-drive Image Light Amplifier). This is JVC's trade name for their implementation of the technology generically know as Liquid Crystal on Silicon (LCOS). The D-ILA chips consist of liquid crystal elements laid upon a reflective substrate. Light is reflected from the substrate when the LCDs are open. Thus you might think of this as a sort of LCD/DLP hybrid technology.

This unit is rated at 1000 ANSI lumens and 600:1 contrast. That sounds like a low contrast ratio for the money, but I'd encourage you to ignore the spec and suspend judgment until you see the image. On this machine as on most others, the technical specifications are useless indicators of image quality.

Earlier editions of JVC's D-ILA products have been plagued by excessive fan noise. Fan noise is substantially reduced on this unit. It isn't silent, but it is remarkably quiet given that it is cooling a 420W Xenon lamp. Most users will be happy to install it without any sound absorbing materials at all.

The 420W Xenon lamp (used to produce optimum color temperature) is still expensive however (check your dealer's price). And the lamp life is 1000 hours at full throttle. On this model however you can scale back lumen output and extend lamp life to as much as 2000 hours, which is another improvement over previous models.

A variety of lens options are available, so you can fill pretty much any size screen you want from any distance.

The connection panel offers one 15-pin VGA input, and another 15-pin VGA for output/monitor loopthrough. There is a set of 5 BNCs for component and RGB, and a separate set of 3 BNCs for component. A 24-pin DVI-D port will accommodate DVI input, and the ubiquitous S-video and composite inputs are also available. There is no audio on board this unit. A set of two RS-232C jacks (in and out) finish off the panel.

As I mentioned above, due to time constraints we did not get a chance to evaluate the G150 with a variety of sources. We did attempt to connect the RCA DTC100, and found that it could not synch on that signal. However JVC informs us that this is a known bug particular to that device, and it is being fixed.

We did some brief calibration work, finding that ideal settings were very close to factory presets. Then we decided to give it a workout with the visually extravagant Moulin Rouge, delivered via 480p from our Denon DVD-3800 DVD player. The result was riveting. Color was rich, beautifully saturated, and dead on as we had anticipated. Contrast performance on the screen was much better than the 600:1 spec would lead you to expect.

But along with the color performance, an equally compelling feature of the image was its sharp detail. Moulin Rouge costumes and sets are rich in detail, and most projectors stumble a bit at resolving this detail completely. After having seen this movie a dozen times, watching Moulin Rouge on the G150 was like watching it for the very first time. A new world of detail never seen before popped off the screen, and it was difficult not to be mesmerized by the spectacle. And the G150's ability to render color is second to none. It handled both the subtle and highly saturated scenes with impressive finesse. So in case you were wondering what you get for the money, the combination of precisely rendered detail and great color performance is it.

We were unable to run it in HDTV this week. But I have seen it with HDTV feeds in three other venues. In my experience the G150 when given the best quality HDTV signal is able to produce the illusion of pure reality that you typically get only from the extremely high-end CRT products that are two to three times the cost.

We wanted to bring the DLA-G150CL to your attention because it is not a product you would typically find in most high-end home theater specialty stores. However that may be changing. It will be shown at the CEDIA show next month, and we suspect a number of custom installers and specialty retailers will want to pick this one up. Meanwhile, if you are in the market for a high-performance projector priced as high as $20,000 depending on options, you will be doing yourself a favor by acquainting yourself with this beautifully engineered machine. (Click here for pic, specs, and dealers offering the DLA-G150CL.)

For more detailed specifications and connections, check out our JVC DLA-G150CL projector page.